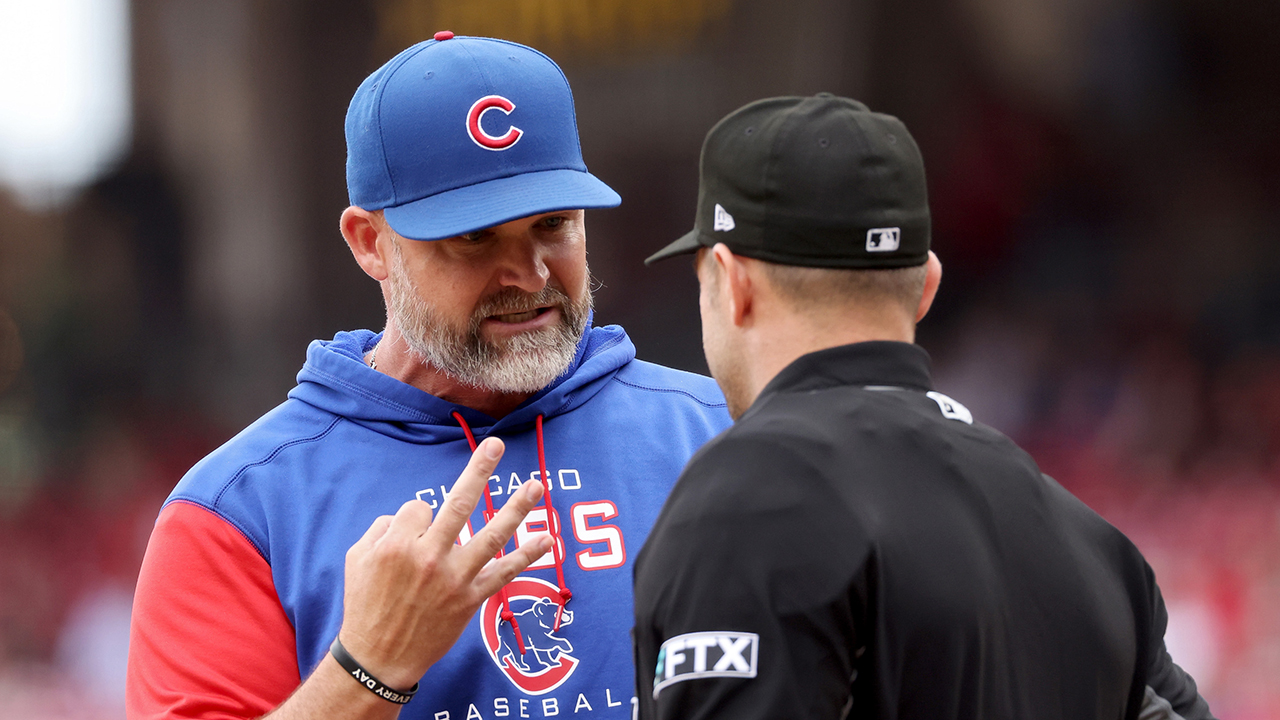 The bad blood between the Chicago Cubs and the Cincinnati Reds continued Thursday afternoon, as the two teams concluded their four-game series with some tense moments.

On Wednesday, Chicago manager David Ross was ejected for the first time this season, coming out to protest with umpire Dan Merzel after Reds reliever Hunter Strickland hit Patrick Wisdom with a pitch in the top of the ninth inning.

Tommy Pham and Nick Senzel of the Reds celebrate after scoring runs against the Chicago Cubs at Great American Ball Park on May 26, 2022, in Cincinnati, Ohio.
(Dylan Buell/Getty Images)

In the series finale Thursday afternoon, Ross was ejected for the second time in as many games after Chicago catcher Willson Contreras was hit with a pitch in the seventh inning.

“I’ll keep that between the umpires,” Ross said, according to The Chicago Tribune “A lot of it just goes back to (Wednesday).”

It wasn’t the only moment in the game when tensions were high.

Reds’ first baseman Joey Votto and Cubs’ reliever Rowan Wick shared words once again after Wick struck out Votto in the bottom of the seventh inning.

The two players exchanged words after the strikeout before the umpires got involved.

It was the second time in as many games that Votto and Wick jawed back and forth with each other. On Wednesday, Wick buzzed Votto with a 93 mph fastball in the bottom of the eighth, resulting in Votto yelling at Wick on his way to first base.

After Wednesday’s game, Votto told reporters that the exchange was simply the result of competition.

YANKEES’ JOSH DONALDSON APOLOGIZES TO JACKIE ROBINSON FAMILY: ‘I HOLD HIS NAME IN THE HIGHEST REGARD’

“He had something to say and I answered,” Votto said after the game. “And that’s how ball is sometimes. You’re competitive, and clearly he [Wick] was competing and locked in on performing well. And I’m pulling on the opposite end of the same rope. And if someone says something to me, sometimes I don’t answer, but I wasn’t in the mood to keep my mouth shut. It’s part of the game. It can be one of the more enjoyable parts of the game.”

RAYS, YANKEES TO USE GAME COVERAGE TO SPREAD AWARENESS ON ‘GUN VIOLENCE’

It was a historic day for Cincinnati at the dish, scoring their most runs since the 1999 season.

The Reds welcome the San Francisco Giants to Cincinnati for a three-game series starting on Friday while the Cubs have the day off before a two-game series against their crosstown rivals in the Chicago White Sox.