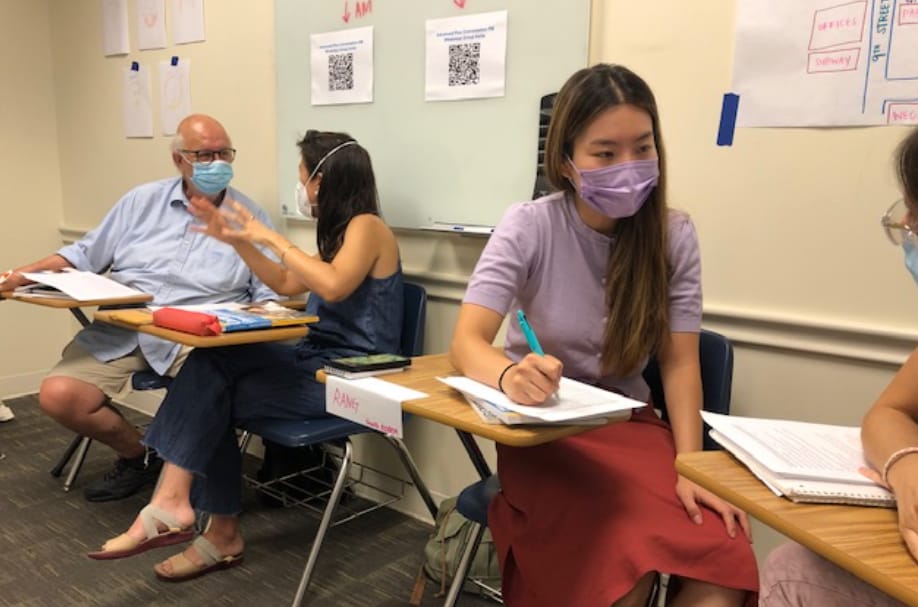 Some use cellphones to join class from as far away as Algeria, Bolivia, Chad and Myanmar. Afghan refugees log on from camps in Albania to pass the time as they wait to come to the United States or Canada.

Those online learners, plus an additional 200 who joined in person this fall in D.C.’s Penn Quarter neighborhood, have come from 98 countries. Together, they’re all working to learn English at the Washington English Center (WEC) with the help of dozens of volunteers.

As it approaches the 30th anniversary of its founding, WEC — with its small staff and 450 volunteers, many of whom are working or retired business professionals — has helped more than 50,000 refugees and immigrants.

When the pandemic hit, the nonprofit that had been solely a brick-and-mortar operation saw its enrollment drop significantly. So it quickly adapted and moved to online instruction.

Md. grant will help students with disabilities set back by pandemic

The switch left many of WEC’s teachers and students feeling worried and isolated. But even as businesses, schools and restaurants have reopened and life has returned to relative normalcy compared with the early days of the pandemic, WEC’s students and teachers adapted, learning how to work together and persevere. And offering classes online has opened up the chance to learn English to even more students.

“We panicked at first when the pandemic hit, and we couldn’t hold classes in person,” said John Odenwelder, executive director of WEC. “But once we regrouped and got the hang of Zoom with our students, we realized we were suddenly able to reach more immigrants and refugees. We were able to reach people who might never have been able to avail themselves to our services.”

The classes are $200 a term, and the center offers scholarships, as well.

Margaret Johnson, a WEC volunteer who lives in Northwest Washington, said teaching an online class was not easy at first, but it was much needed during the pandemic and important to keep the classes going when people were feeling isolated.

Leigh Bailey, who lives in Dupont Circle and has been teaching at the center since 2006, said pivoting to online instruction was also a challenge because so many students had young children or shared rooms where they were trying to learn. Still, she said, she was inspired by their dedication.

“They’ve come from less-than-fabulous circumstances,” Bailey said. “And they’re working hard, so you appreciate that as a teacher.”

The center has been a lifeline for students to learn English and build a sense of community.

When Yuliia Stelmakh shared in the online sessions her story of fleeing Ukraine and going to Poland, many of her classmates and teachers emailed her later and asked how they could support her and her family.

“Every person offered me help and was asking, ‘What can I do for you?’ ” said Stelmakh, 41, who eventually made it to family members in D.C. “It was very amazing, very touching. It meant so much to me.”

Another student, Karina Quintiliano, 32, who’s from Brazil and now lives in D.C., said taking classes for the last three years helped her learn more about American customs like Halloween or foods such as brisket and mac and cheese.

“You learn not just the grammar and words,” she said, “but about American culture, too. That’s helpful and fun.”

For Amina Bot, 39, of Bethesda, the classes helped her parents who came to live with her from their home country of Algeria. They not only learned English but also made friends.

When her father, Charef Bot, became ill two years ago, she said her parents’ teachers checked on them and occasionally brought her mom — Khedidja Hadj Henni, 69 — books and assignments if she had to miss classes. Charef Bot died in December 2020, and at his funeral a fellow student from Tunisia approached Amina Bot and told her how he fondly remembered her father’s dedication, saying he would attend class and steadfastly take notes.

“It wasn’t just learning English, it was building friends and a community when they knew no one,” Bot said.

After months of learning online during the pandemic’s shutdown, Henni finally got to meet one of her English teachers in person — and they hugged and cried.

“They had worked together for so long online but hadn’t seen each other in real life,” Bot said. The two are now friends and go to coffee shops and museums together.

Henni said the center has also helped her to learn basic skills such as how to use credit cards, open a bank account and write checks — tasks she hadn’t done before.

She said she felt frustrated and shy in the United States because she couldn’t speak and understand English very well, but “thanks to WEC, I got out of my shell.”