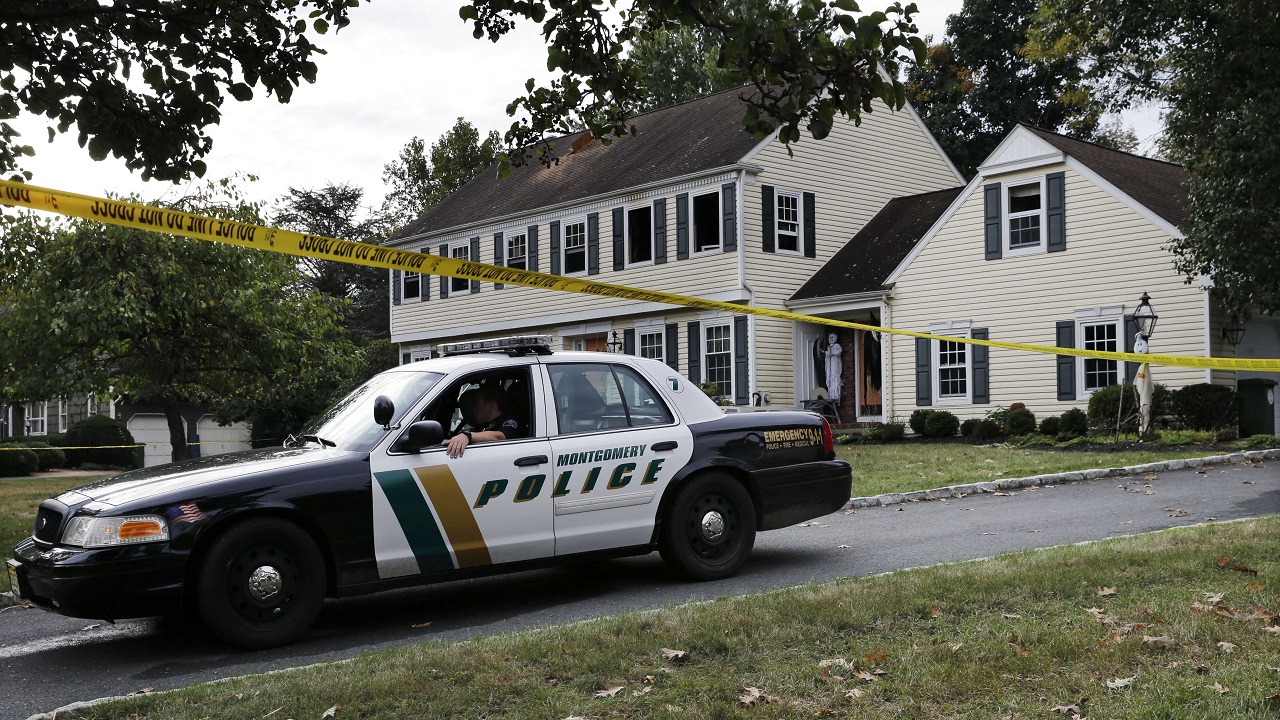 This is the first part of a two-part series. Please check back for more updates related to this story.

The deaths of a prominent New Jersey couple discovered after a suspicious house fire at their suburban Garden State home remain shrouded in mystery despite the nearly eight years that have passed without any concrete answers.

The lifeless bodies of longtime teacher Joyce Sheridan and her Republican politico husband John Patrick Sheridan Jr. were discovered in the bedroom of their Montgomery Township, New Jersey, home in the early morning hours of Sept. 28, 2014. The case was initially ruled a murder-suicide, with Somerset County investigators announcing that John Sheridan killed his wife by stabbing her in the chest before stabbing and killing himself.

But loved ones repeatedly questioned that determination, and not only hired an independent forensic pathologist — the famed Dr. Michael Baden — but also called on the New Jersey Attorney General’s office to conduct an investigation of its own.

After years of public criticism from the Sheridans’ adult children over the way the case was handled, a spokesperson for the Attorney General’s office revealed in May that the office was investigating the matter and would “follow the evidence wherever it leads.”

The spokesperson did not respond to Fox News Digital’s recent request for an interview regarding the case and did not answer questions about when the office’s investigation began or whether there are any updates in the case.

“The investigation is ongoing, and no further information is being released at this time,” spokesperson Steven Barnes wrote in an email.

A spokesperson for the Somerset County Prosecutor’s Office referred all inquiries to the Office of the State Attorney General.

The Sheridans’ deaths have since become the topic of public and media scrutiny, and have become the subject a local WNYC Studios podcast exploring the circumstances.

Dr. Baden received a call from the grieving Sheridan family just days after the couple’s deaths and after Assistant Medical Examiner Dr. Eddy Jean Lilavois had already performed autopsies on behalf of the state, he told Fox News Digital.

Lilavois conducted an autopsy on Joyce Sheridan, age 69, on Sept. 30, 2014, when she was found to have suffered from “thermal injuries, sharp force injuries and blunt impact injuries,” according to the medical examiner’s report provided to Fox News Digital by the family.

She appeared to have suffered first- and second-degree burns over her face, neck, chest and extremities. Her body was riddled with 10 stab wounds and incisions to her head and chest, the report states.

Lilavois determined she died from a “stab wound of chest perforating aorta,” and that the manner of death was “homicide.”

John Sheridan, 73, was wearing a partially-destroyed T-shirt and “a brief” when he was transported to the North Regional Medical Examiner’s Office in Newark, New Jersey, where Lilavois performed an autopsy on Sept. 29, 2014.

He, too, appeared to have suffered from “thermal injuries, sharp force injuries and blunt impact injuries,” according to an autopsy report also provided to Fox News Digital.

He suffered “extensive first- and second-degree burns” throughout his body, with Lilavois noting that “a few spared areas of skin are seen.” His body had five stab wounds or incisions in his neck, chest and abdomen, the report states, and he appeared to have suffered rib fractures.

The cause and manner of his death were initially listed as “pending further studies” and “pending investigation,” respectively. Lilavois later determined John Sheridan died from suicide as a result of “sharp force injuries and smoke inhalation.”

But his family did not agree.

Dr. Baden performed a second autopsy on John Sheridan with Lilavois present Oct. 4, 2014, at the medical examiner’s Newark office, according to an affidavit he wrote in late 2015 in an attempt to correct the record. He also reviewed the findings from the examination of Joyce’s remains but was asked specifically to analyze the circumstances of John’s death amid the family’s concerns over investigators’ “suicide” determination, he said.

In the report, Baden wrote that Mr. Sheridan’s injuries were “more consistent with homicide than self-infliction.”

Baden cited Dr. Henry C. Lee, founder of the self-named Institute of Forensic Science at the University of New Haven, in arguing that DNA evidence also pointed to the presence of a third person, likely a male, the report states. And blood evidence “does not support the conclusion that John Sheridan stabbed Joyce Sheridan.”

Baden concluded: “It is my opinion to a reasonable agree of medical certainty that John Sheridan’s manner of death is properly certified as undetermined.”

The state changed course in 2017, ruling that Sheridan’s manner of death was “undetermined,” in line with Baden’s suggestion.

Baden, who served as New York City’s Chief Medical Examiner and has conducted more than 20,000 autopsies in his five-plus decades as a forensic pathologist, told Fox News Digital he was particularly struck by one of the stab wounds to Mr. Sheridan’s neck, which pierced his jugular vein, and the apparent absence of the weapon used to end his life.

“They found a knife that stabbed Mrs. Sheridan, that matched — the stab wounds matched the knife,” he said, “but they could not find the weapon that inflicted the injuries on Mr. Sheridan. To me, that was very important.”

Baden, who has been involved in other high-profile cases, including the death of financier and convicted sex offender Jeffrey Epstein, acknowledged that the presence of fire department personnel early on in the case “does change the scene a bit.”

“We have suicides that are by hangings, by gunshot wounds, by stab wounds. And invariably, the weapon is at the scene,” Baden, also a Fox News contributor, added.

People file past a portrait of John and Joyce Sheridan to a memorial service for the couple at the War Memorial Oct. 7, 2014, in Trenton, N.J.
(AP Photo/Mel Evans)

Baden spoke highly of Lilavois, with whom he had previously worked, but said he did not agree with his determination related to the death investigation of Mr. Sheridan.

He also reiterated the findings in the affidavit in noting that DNA that likely belonged to a man – but that did not match Mr. Sheridan – was recovered from the knife used to stab Mrs. Sheridan.

“Even the fire was curious to me,” he said. “I’ve been involved with, over the decades, a number of fires set after somebody is killed. Usually, those are homicides where the person doing the killing then sets fire to the place in order to destroy evidence … it’s very unusual for somebody who commits suicide.”

Asked if Mr. Sheridan showed any signs of defensive wounds, Baden said the man’s hands were burned by the fire, which made determining the existence of such injuries difficult.

Dr. Lee was out of the country and was not available for an interview with Fox News Digital. Meanwhile, Dr. Lilavois could not be reached for comment despite multiple attempts.

Police and firefighters received a call just before 6:15 a.m. on Sept. 28, 2014, for a report of a fire at the couple’s Somerset County home. They arrived to find the fire had erupted only in an upstairs bedroom, where officers discovered John and Joyce unresponsive inside.

John was pronounced dead, and Joyce was rushed to an area hospital but could not be saved.

Joyce Sheridan was a teacher for more than 15 years before retiring, at which point she “devoted much time to her grandchildren” and on her hobbies, which included knitting and gardening, according to an obituary for the couple.

And prior to his death, John Sheridan served as president and CEO of Cooper University Health Care in Camden, New Jersey.

He had previously spent years in state government, including working with former New Jersey Gov. Chris Christie’s transition team, serving as a commissioner for the New Jersey Department of Transportation, general counsel for the New Jersey Turnpike Authority and deputy attorney general for the state of New Jersey, according to the obituary and reports.

The Sheridans were “loved by a large extended family” and left behind four sons and three grandchildren at the time.

Hundreds of people, including politicians and elected officials, attended an October 2014 memorial service, where then Gov. Christie called them “”two really extraordinary people.”

“I can’t imagine the pain and the loss that the Sheridans are feeling right now,” Christie said, according to an NJ.com report. “We’re here for you.”

Even as the coming months will mark eight years since Joyce’s and John’s deaths, their family has consistently doubted the analyses and findings from police and have further accused investigators of trying to mold the evidence to fit their theory.

They questioned the similarities in their parents’ case and one from just months prior, a federal murder investigation involving a New Jersey “political operative” in theorizing about a possible connection between cases, The New York Times reported.

Michael Galdieri was stabbed and set on fire inside his Jersey City apartment, according to the report. One man reportedly confessed to hiring two hitmen to kill Galdieri.

One of the Sheridans’ sons, Mark, pointed to the similarities between the knives used in both cases in asking prosecutors to look for any connections, the report said.

Speaking to the Times, Sheridan acknowledged that, with nearly eight years gone, “it’s going to be very hard from memories and physical evidence to get to anything.”

He added to the paper: “But that doesn’t mean we don’t want them to try.”

Stephanie Pagones is a Digital Reporter for FOX Business and Fox News. Story tips can be sent to [email protected] and on Twitter: @steph_pagones.

‘Blossom’ Cast: Where Are They Now?