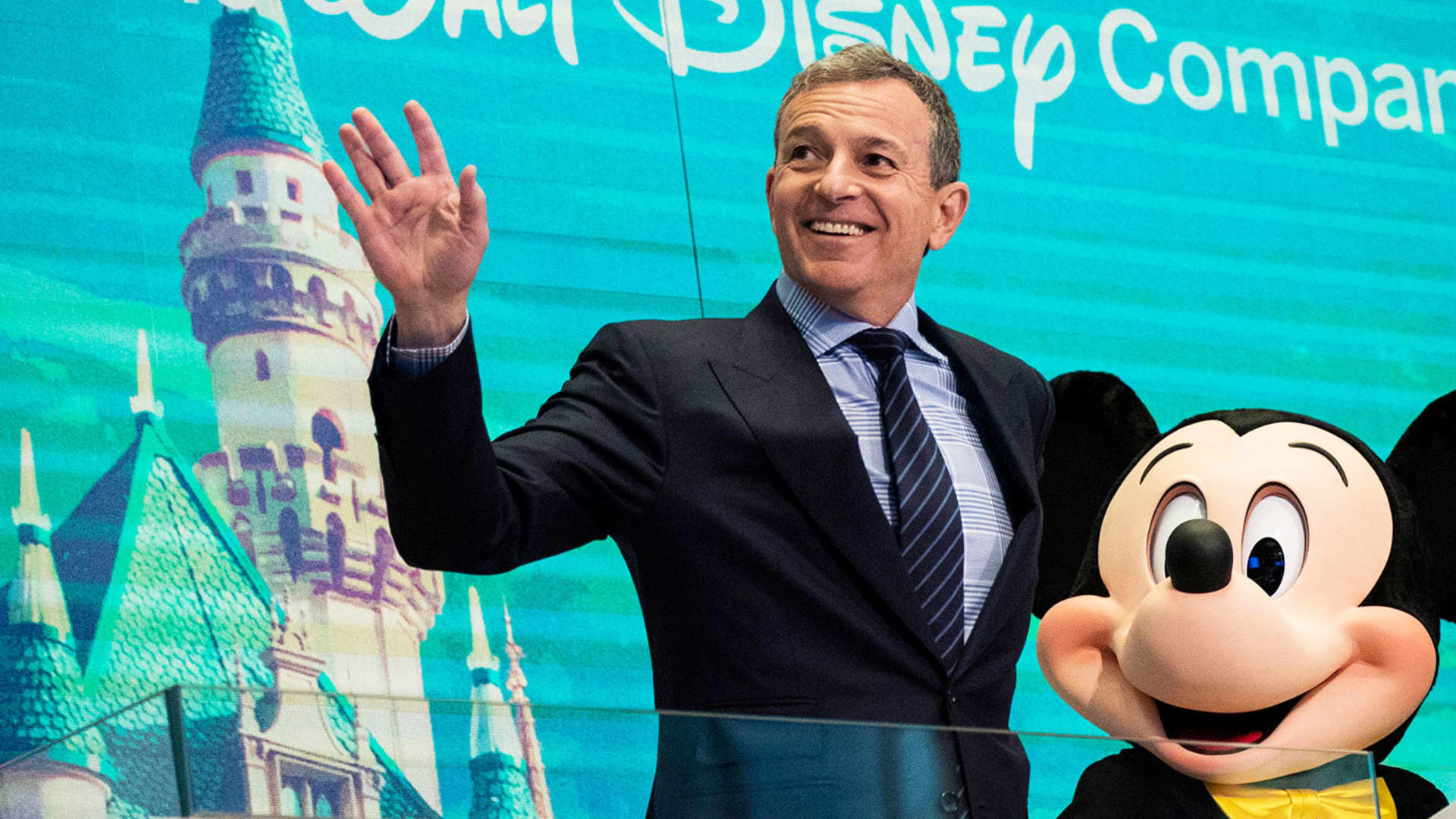 Chief executive officer and chairman of The Walt Disney Company Bob Iger and Mickey Mouse look on before ringing the opening bell at the New York Stock Exchange, November 27, 2017 in New York City.

Disney Chief Executive Officer Bob Iger said Monday during his first town hall since returning to the company that he won’t remove its hiring freeze as he reassesses its cost structure.

Iger kicked off the town hall by quoting a song from the musical “Hamilton” that says “There is no more status quo. But the sun comes up and the world still spins,” according to sources who heard the town hall and asked to remain anonymous because the event was private.

It was Iger’s first town hall with staff since Disney abruptly announced last week that he would replace Bob Chapek, who had been in the job for less than three years. Under Chapek, Disney faced criticism for its treatment of employees, its response to Florida’s controversial “Don’t Say Gay” legislation and its decision to take away budgetary power from creative heads.

Earlier this month, Chapek in a memo had announced plans for a hiring freeze, layoffs and cost cuts. Disney shares have fallen nearly 38% this year.

Iger, 71, had repeatedly said he wouldn’t return as Disney’s CEO, but on Monday told staffers it was “an easy yes” to return to the job. He said it was the right thing for him to do because of his love for Disney and its employees. Several senior executives recently told board members they’d lost confidence in Chapek’s leadership, CNBC reported last week, prompting the company’s outreach to Iger, who previously served as Disney’s CEO for 15 years.

After about five minutes of introduction, Iger jumped into taking questions, including many from an in-person audience. Disney employees could submit both named and anonymous questions before the event began. Many in attendance began their questions by thanking Iger for returning the company.

Iger acknowledged Disney’s focus must shift toward making its streaming business profitable rather than concentrating on simply adding subscribers, which was the company’s priority when he gave up the CEO job in 2020. He noted Disney won’t be pursuing any major acquisitions in the near future, adding he’s comfortable with Disney’s current set of assets.

In a memo last week, Iger said one of his first actions will be to redo Disney’s organizational structure, which under Chapek centralized decision-making over content and distribution was centralized under Kareem Daniel. Iger has already fired Daniel and said at the town hall a new structure will take time to put in place. He said that will be done in conjunction with other executives including chairman of general entertainment content Dana Walden, Disney Studios head Alan Bergman, ESPN president Jimmy Pitaro, and CFO Christine McCarthy.

Iger said he wouldn’t make any dramatic proclamations about Disney’s work-from-home policies but said he felt creative businesses worked best when employees were together in-person.

Iger joked his wife, Willow Bay, told him he should run Disney again so that he wouldn’t run for U.S. president — something Iger has thought about in the past.

Toward the end of his remarks, Iger noted that he wouldn’t have come back if he didn’t believe Disney’s future is bright.

WATCH: Bob Iger will be able to bring back talent to Disney, says Jim Cramer