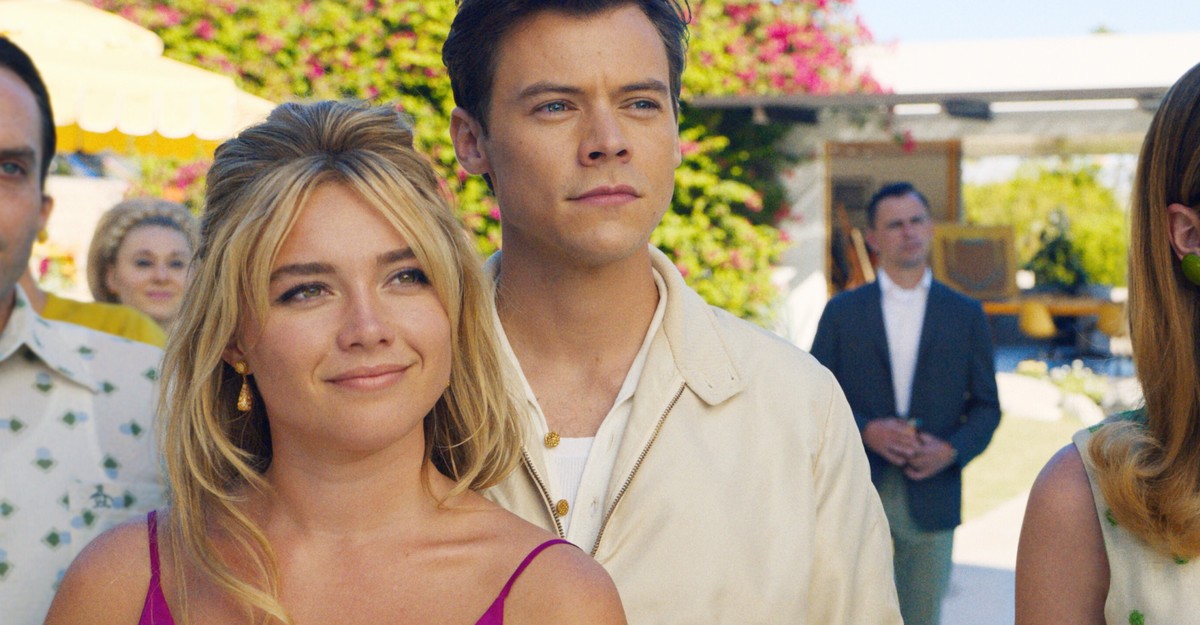 The world of Don’t Worry Darling is picture-perfect at a glance: a company town called Victory, California, where a bunch of mid-century-modern homes have magically sprouted in the desert. Imagine someone opened a Mad Men theme park in Palm Springs, with the men outfitted in skinny ties and horn-rimmed glasses, and the women in glitzy dresses keeping everyone’s martinis fresh. It’s a specific kind of throwback fantasy, one in which husbands peck their wife on the cheek before heading to work, then return home expecting a roast in the oven. So it may not shock you to learn that all is not as it seems.

Read: 26 brilliant movies that critics were wrong about

Olivia Wilde’s new film, her follow-up to the fizzy teen comedy Booksmart, owes a debt to many spooky dramas about the dark side of the suburbs—think The Stepford Wives, with even more of a sci-fi edge. But it’s a bizarrely paced movie doomed more by a thudding, repetitive narrative than by the behind-the-scenes drama that unfolded in the lead-up to its festival premiere. Viewers can tell from the get-go that something sinister is afoot in Victory, yet it takes the protagonist, Alice Chambers (played by Florence Pugh), nearly the entire runtime to start getting any answers. The experience might have been worthwhile if Don’t Worry Darling built to a grand reveal, but rather than offering satisfying answers, its final twist only provokes more baffled questions.

Wilde is not untalented behind the camera. Booksmart’s straightforward “one crazy night” story was powered by all kinds of clever visual tricks, and Don’t Worry Darling is very slick by design. The world of Victory is supposed to be an enchanting dream you’d never want to wake up from, and Wilde and her excellent cinematographer, Matthew Libatique, make it look like a David Hockney painting come to life, all crisp colors and stark blue skies. Every morning, all of the town’s men pile into their ’50s automobiles and drive off to their mysterious jobs working for a man named Frank (Chris Pine) on something called the “Victory Project.” The ladies—including a gossipy mom named Bunny (Wilde herself); Frank’s imperious wife, Shelley (Gemma Chan); and the distant-seeming Margaret (KiKi Layne)—mostly kvetch by the pool and take elaborate ballet classes (Wilde shoots those from the ceiling, making the women’s Busby Berkeley–esque dance moves look like the menacing behavior of a hive mind).

Alice first gleans that something is awry when Margaret starts to behave aberrantly; when her friend is whisked away, Alice starts having strange visions of a plane crashing in the distance, or of trying to crack eggs and finding nothing inside them. So much of Don’t Worry Darling’s runtime is concerned with surreal events like these, which are dismissed by everyone around Alice. One of the best actors of her generation, Pugh does her best to portray Alice’s crumbling mental state with integrity, but the script she’s working with is exhaustingly cyclical. Any concern she brings to Bunny, or to Frank, or to her devoted husband, Jack (Harry Styles), is quickly brushed aside, and a threatening doctor (Timothy Simons) is on hand to prescribe tranquilizers at the first hint of trouble.

Read: The 10 must-watch indie films of the summer

Styles is perhaps the movie’s biggest issue beyond its underbaked screenplay; he’s an oddly flat presence despite his status as a global superstar. Styles blends in fine when he’s just one of the boys sipping whiskey and talking reverently about the genius of Frank’s Victory Project, but he can’t handle the big emotions required later in the film as Alice starts to unravel. Don’t Worry Darling has a lot of yelling and screaming about how things are Not Quite Right, and whereas Pugh can do that in her sleep, Styles comes off as uncomfortable throughout. That’s a serious obstacle for a movie that is essentially about how the ’50s-housewife vision is simply a male-power fantasy—a premise that would require Styles to be a more malevolent, commanding presence.

Don’t Worry Darling could have saved itself with a good ending. I shall not spoil the film’s conclusion, but it left me retroactively even more flabbergasted by the two hours of circular plotting I’d just witnessed. What’s “going on” in Victory is disclosed, in a manner of speaking, but I could fill a notebook with further questions I had about how the curious planned community functions. Wilde’s film aims to be a feminist parable about how this idealized vision of the past is actually a curdled vision of coupledom. Abstractly, that’s a robust concept; in execution, the movie’s absurdity overpowers its message.