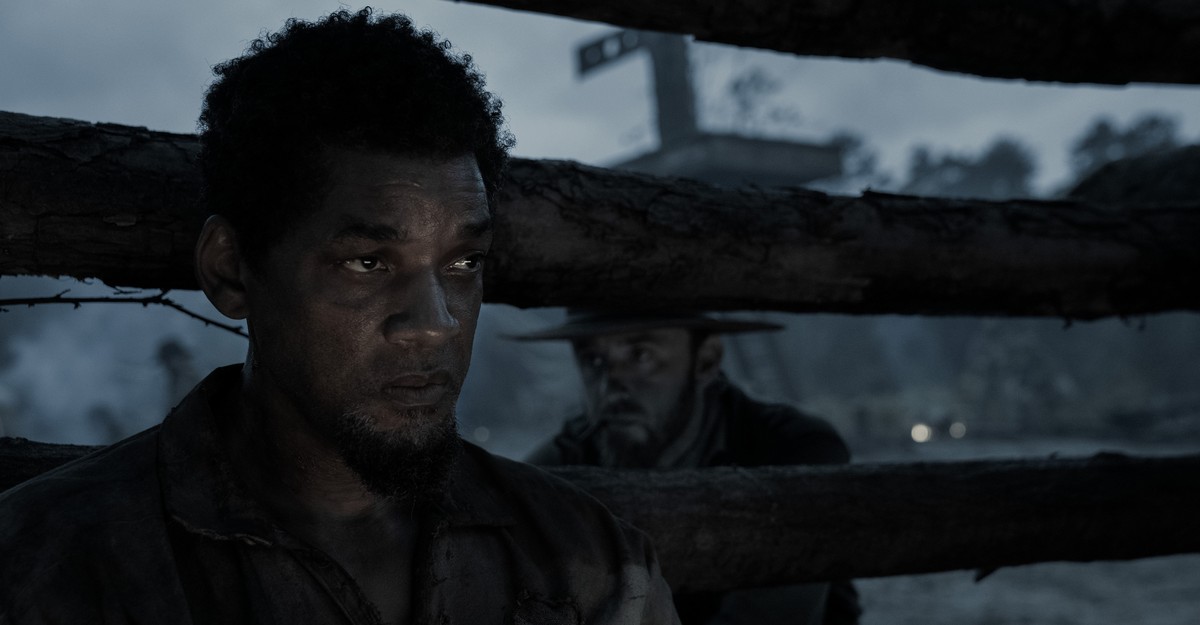 The filmmakers behind Emancipation probably wanted a standard Hollywood publicity circuit, with its stars offering amusing anecdotes about production and talking up the importance of the Training Day director Antoine Fuqua’s slavery-era drama. But the press tour for Emancipation, which starts streaming today on Apple TV+, has instead looked more like an apology tour.

That’s perhaps unsurprising, considering the film marks the return of Will Smith to the public eye. In light of his outburst at the Oscars earlier this year, Smith has conceded that he would “understand” if people aren’t ready to see him back on-screen, an admission that prompted a fresh wave of media discourse over whether he was penalized appropriately. (Smith has since apologized for slapping Chris Rock during the ceremony and accepted the Academy’s decision to ban him from the awards for 10 years.) But Smith hasn’t been the only one to cause controversy: At the premiere of Emancipation, a producer, Joey McFarland, brought an original 19th-century photograph of “Whipped Peter”—the real-life enslaved man whose story inspired the movie—to the red carpet. McFarland showed the photo off like an accessory, a moment that drew criticism for his oddly casual presentation. In an apology, he wrote, “I hope my actions don’t distract from the film’s message.”

If only Emancipation actually had a memorable message. The film casts Smith as Peter, a character based on the photo’s subject who, after learning of Lincoln’s Emancipation Proclamation, runs away to find Union troops. Given the minimal information available about the real man’s life story, the filmmakers have invented much of it. In the movie, he’s chased by Fassel (played by Ben Foster), a sadistic slave catcher whose hounds and henchmen force Peter to swim through gator-infested swamps and sneak past neighboring plantations. His goal isn’t just to make it to freedom; he’s also seeking to reunite with the family he was forced to leave deep in Confederate territory. The result is a movie that’s part prestige drama, part survival thriller, part war epic—and all confused.

The film’s mishmashing of these genres is careless. Scenes of Peter suffering in the Louisiana heat and glaring silently at his captors transition into a schlocky action movie: He incapacitates a pair of enslavers and races through the bayou, Fuqua’s camera tracking him in showy slow motion. Peter’s hunched posture melts away unprompted; in some shots, as he clears snakes from his path and wrestles an alligator underwater(!), Smith looks just like the larger-than-life persona he’s played many times throughout his career. One character explains that Peter can “survive things most men can’t,” turning Peter’s story into, essentially, a superhero saga. The pivot is bewildering, considering how Fuqua has argued that movies about enslaved people should be reminders of reality—even if grim. But Emancipation isn’t examining history; it’s indulging in fantasy.

By turning Peter into a warrior, the film undermines the very figure it’s trying to honor. The portrait of “Whipped Peter” was widely circulated during the Civil War not only because of how disturbing his scars looked, but also because of the man’s haunted, mysterious expression. His image represented the horrors of slavery, and its dissemination helped further the abolitionist movement—yet his own, human story was not definitively told. Emancipation could have done that. Throughout the film, Fuqua couples sickening visuals of torture with serene drone shots of the bayou, suggesting how easily time can erase history’s horrors and how powerful images can memorialize the truth. But by turning Peter into an action hero, the director fails to offer new or nuanced insights into these themes.

Emancipation thus continues the historical presentation of Peter as a mere symbol, barely examined beyond his physical blemishes. Peter is near invincible as he dashes through the swamps just out of Fassel’s reach, and he’s irreproachable, the only character who tries to relieve others’ suffering. The movie attempts to imagine Peter’s interiority by insisting that his faith in God strengthens him, but gesturing vaguely at that idea is about as far as it goes.

Despite a committed cast and often stunning cinematography, the film’s script is too blunt and the direction too ham-fisted to make Emancipation anything more than another rote—albeit expensive—entry in the slavery-movie genre. As Emancipation sails past the two-hour mark, clumsily mixes genres, and stumbles toward a pat ending, the film struggles to justify itself. Some viewers may be inclined to avoid Emancipation because of Smith’s and McFarland’s actions. But the mediocre film offers plenty of its own reasons for people to not watch.