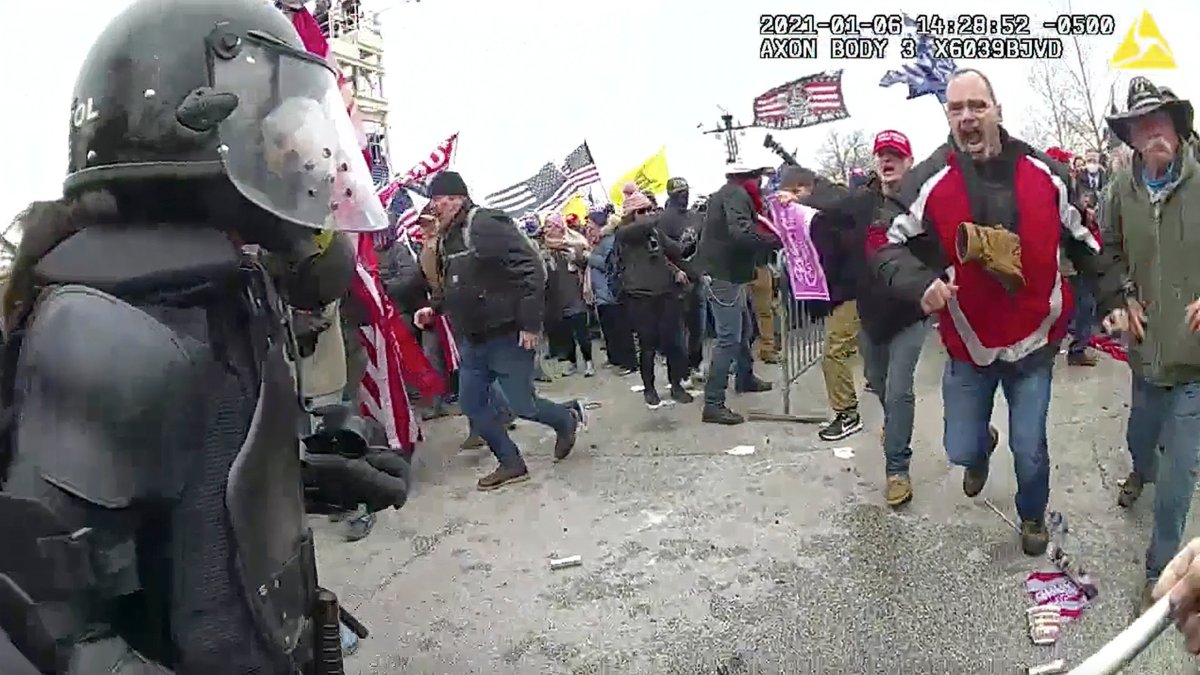 An ex-NYPD officer convicted of attacking police at the Capitol on Jan. 6, 2021, says he in part blames his actions on “flashbacks” from his past years working as cop in the Bronx.

In a letter filed by his lawyers seeking a lower sentence, Thomas Webster told a psychologist that he could make a connection between his violent actions at the Capitol to a past fight with an armed robber in the Bronx who was trying to get his gun. Webster told the psychologist he attacked a Capitol Police officer with a metal flagpole because “at that moment, I had flashbacks of the struggle we had on the staircase.”

Webster was seen and heard on video shouting and swearing at uniformed officers. The video then showed him swinging a metal pole and slamming it on to the bike racks being used to try to hold the crowd at bay.

Officer Rathbun managed to pry the pole away, but the video captured Webster pushing through the police line. He is seen attacking the officer and pulling at his facemask. During his trial in May, Mr. Webster testified that he was merely trying to protect himself from a “rogue cop” who punched him in the face.

But the jury saw video and convicted Webster on six counts – four of which include use of a deadly or dangerous weapon. Prosecutors want Webster to face 17 years in prison when he is sentenced on Sept.1.

Included in his pre-sentencing submission is a mental evaluation by psychiatrist Dr. Shahla Gorovoy. She wrote that Webster attacked the officer in part as a result of childhood experiences and PTSD from 20 years as an NYPD officer.

According to her letter, Dr. Gorovoy said Webster spoke about one traumatic event during his time as an NYPD officer. He said he had endured a “violent struggle” with an armed robber in the Bronx who was trying to get his gun. Webster said he was injured in the incident and had to be taken to the hospital.

Gorovoy added that “Mr. Webster was able to connect the January 6 event to the incident he experienced” during the struggle with the robber by “trying to show the officer my hands so he knows I am not armed, or I won’t go for his gun; because I know as a police officer, your first fear is that the person may go for your gun.”

In the letter, Dr. Gorovoy added Webster now has regret and remorse, that he “wished he had stayed home that day” and he now “understands violence is not acceptable.”

A retired NYPD officer is being accused of being a part of the mob that illegally entered the Capitol on January 6th.

It also seems Webster also blames leaders who called the crowd to the Capitol — without naming former President Donald Trump by name.

His lawyers wrote, ”The fact remains that [Mr. Webster] and others were called to Washington, D.C. by an elected official. People like Mr. Webster were told lies, fed falsehood and told that our election was stolen when it clearly was not.”

Webster’s attorneys go on to add that “Defendant is no longer under any illusion that the 2020 election was stolen or that he was fighting for a just cause.”

While convicted of charging at police with a weapon outside, Webster, now 56 years old, says he never entered the U.S. Capitol building.

In addition to working in the Bronx, as an NYPD officer, the father of three had also served on a security detail out of City Hall.