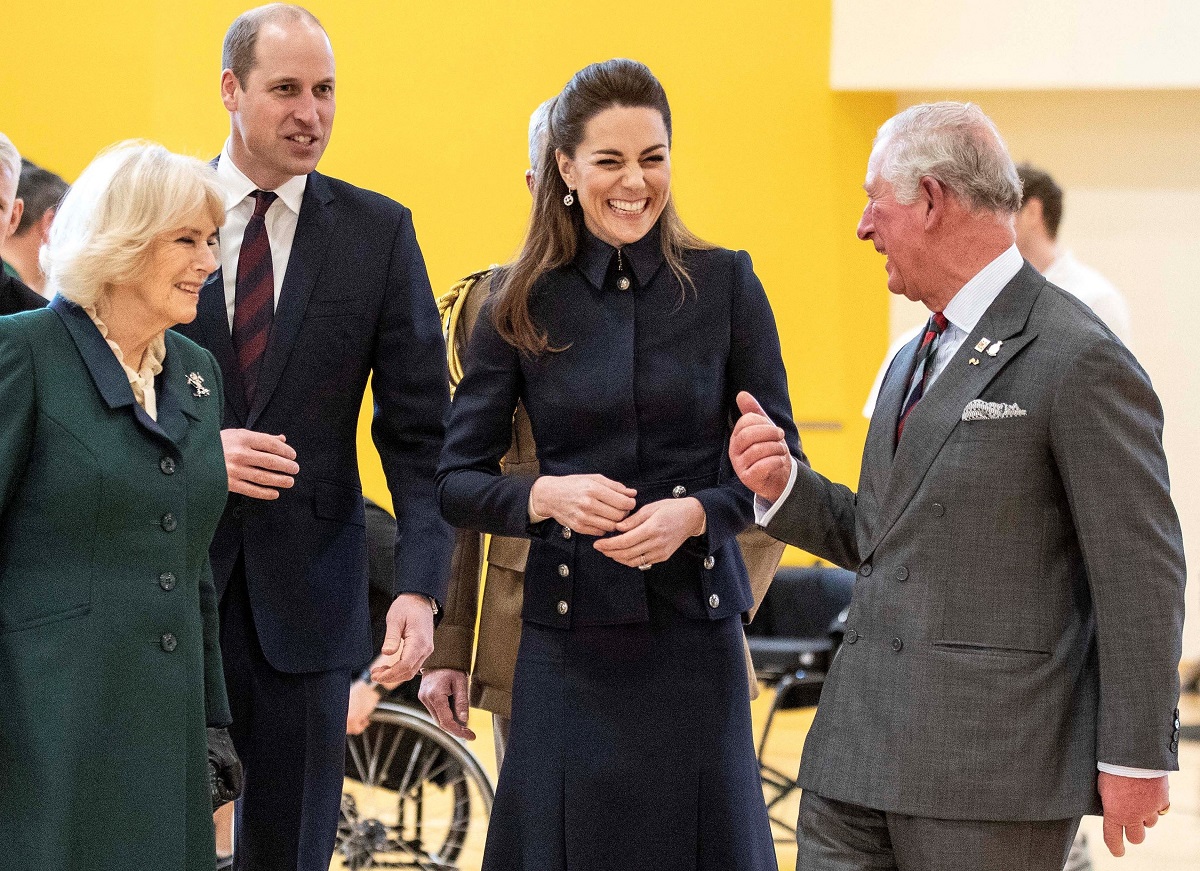 The royal family has just showed the world what the current and future of the monarchy looks like with the release of a photograph of King Charles III, Queen Consort Camilla (formerly Camilla Parker Bowles), Prince William, and the Princess of Wales (formerly Kate Middleton) standing side by side.

Now a royal expert is saying that the photo is also meant to send a specific message more than 5,000 miles away to Prince Harry and Meghan Markle.

What a body language expert noticed about the new portrait

On Oct. 1, the palace released the portrait of the King Charles, Prince William, and their wives. It was originally taken on Sept. 18 prior to the Heads of State reception at Buckingham Palace which included U.S. President Joe Biden and French leader Emmanuel Macron.

Body language expert Judi James analyzed each of their poses and what they mean.

“[Prince William’s] splayed legs and the way his hands are clasped in front of his torso form a pose of attentive waiting,” she told Express. “It’s the kind of pose you see from staff in hotel lobbies and it could signal his role of support and stand-in for his dad. It looks dutiful and Catherine’s arm round his back suggests she is, in turn, there to support him.”

As for King Charles and Camilla, James pointed out that their poses appear more affectionate than the Prince and Princess fo Wales’ which is an “unusual public display of affection” for the sovereign.

She added that the photo of the four senior royals gives the impression that the monarchy is “in safe hands for at least one more generation.”

Daily Mail Diary Editor and royal expert Richard Kay stated that the “hint of a smile” on the new king’s face shows he is “not daunted” by what lies ahead of him. And according to Kay, the release of the portrait is also sending a direct signal to Prince Harry and Meghan that there is “no way back” for them now.

“It is not difficult to imagine how this picture will be viewed in sunny California, where the Duke and Duchess of Sussex are based. Might it deepen their feelings of exclusion and exile, or will it merely serve to remind them why they chose to break from the family in the first place?” Kay wrote in the Daily Mail.

“It surely can be no coincidence that the picture was taken when the couple were still in Britain and several days before they returned home to their children Archie and Lilibet. It must, therefore, be yet another signal that they will never again return to their central role in royal life.”

James noted that Harry did something during Queen Elizabeth’s state funeral that showed he was trying to come to grips with not having a more active role in that. She observed the Duke of Sussex making a certain gesture suggesting he wanted a larger part.

“Following the coffin beside his brother there were some suppressed signals of tension, like the sucked-in lips,” James told The Sun. “But when the coffin was being lowered [Harry] did a repeat of the shoulder-rolling gesture from the last walk. He appeared to not only be bracing or steeling himself for the service inside, but was also mimicking the gesture the coffin bearers were doing in what looked like a desire to take a more active role himself.”

35% of millionaires say it’s ‘going to take a miracle’ to be ready for retirement, report finds