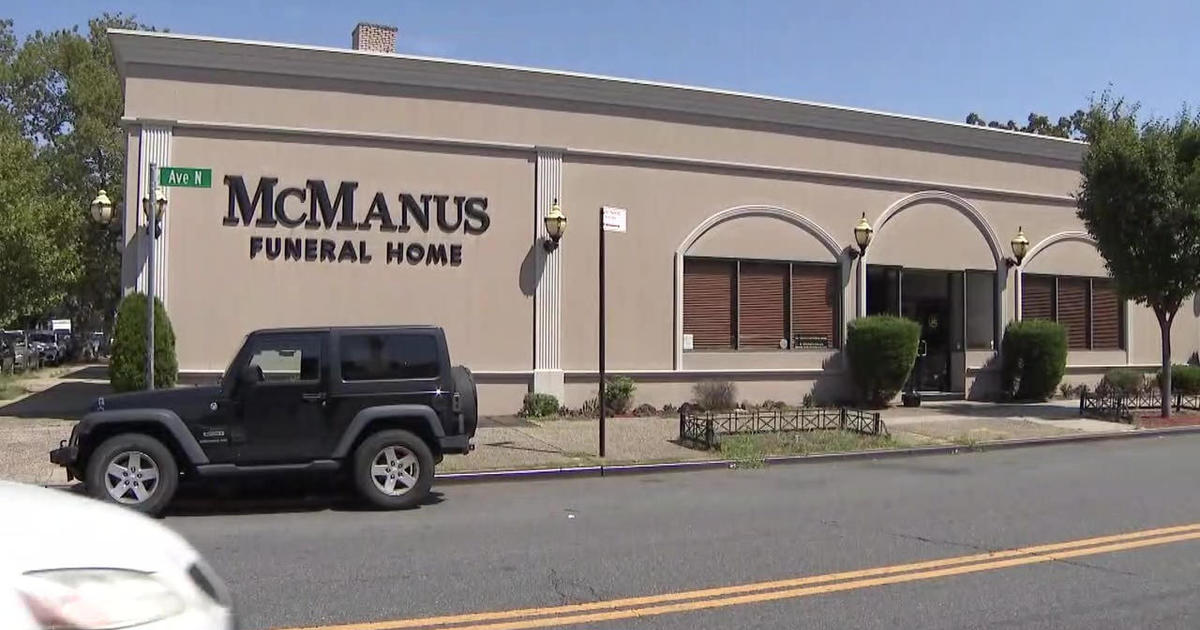 NEW YORK — A Brooklyn family says they are perpetually in mourning, not only over the loss of their loved one, but because of the way they had to say goodbye to her.

As CBS2’s Lisa Rozner reported Tuesday, they suing the funeral home because they don’t want this to happen to anyone else.

With just flowers and a photo of 37-year-old Regina Christophe, it was not the goodbye her family wanted.

They hired McManus Funeral Home on Avenue N shortly after her death on June 24, but asked for a funeral date two weeks later so family could fly in for the open casket memorial service.

But on the day of the funeral, her mother, Chantal Jean, says Christophe was so unrecognizable, the casket was removed.

“It was very decomposed, was a bad stench,” Jean said. “Her dress was filthy. They put a whole bunch of makeup all over the white dress. They had a garbage bag around her neck, a black one. They had two bags around her feet, you know, as if to say she was garbage.”

“The family made repeated attempts to see the body before the actual funeral and they were denied access until the day of,” family attorney Kurt Robertson said.

To make matters worse, the family says the funeral director wasn’t even on site, only a receptionist.

“He came over and covered it, and took an extra cloth that was hanging over the casket and covered her face with it,” cousin Stephanie Puzo said.

Then they say a family member and the employee removed the casket, but they were traumatized.

“When I got home, I couldn’t even stand,” Violette Dure said. “Starting that Sunday, I was sick like a dog. We in the Haitian community, the dead are sacred.”

The medical examiner told Rozner that Christophe’s body was picked up June 24 and ready for release the next day, but the family said even though at that time they were in contact with the funeral home, the funeral home waited several days to pick her body up.

Rozner spoke with funeral director Anthony Tenga, who allowed her to record the conversation.

“Why did her body end up the way it was?” Rozner asked.

“I think there was a lot of factors — the heat factor, the date from the date of death to the date the family came in to the day she was removed to the viewing. It’s days and days,” Tenga said.

“Was there any lapse in communication among your staff?” Rozner followed up.

“No, she was embalmed. She was refrigerated, kept in what’s called a cold room,” Tenga said.

The Christophe family said they never received any apology. Through tears, Tenga had the following message for Christophe’s mother:

“I don’t know what to tell you. Tell her I’ll always pray for her and love her,” Tenga said. “I want forgiveness first and I need it, and if she doesn’t give it to me I’m fine with it. But am I sorry? With all my heart, I’m sorry.”

Afterward, Tenga did walk across the street to apologize in person, but she declined to speak with him.

“The day of the funeral is when I tried to call him and the receptionist and he went in the back to talk to him and he came back. He said, ‘Anthony doesn’t know what I’m talking about,’” Jean said. “No one said goodbye. No one. He took that right away from us for us to say goodbye.”

Family members said they paid about $6,000 for the funeral costs, adding they were never offered a refund. They filed the lawsuit against the funeral home last week.