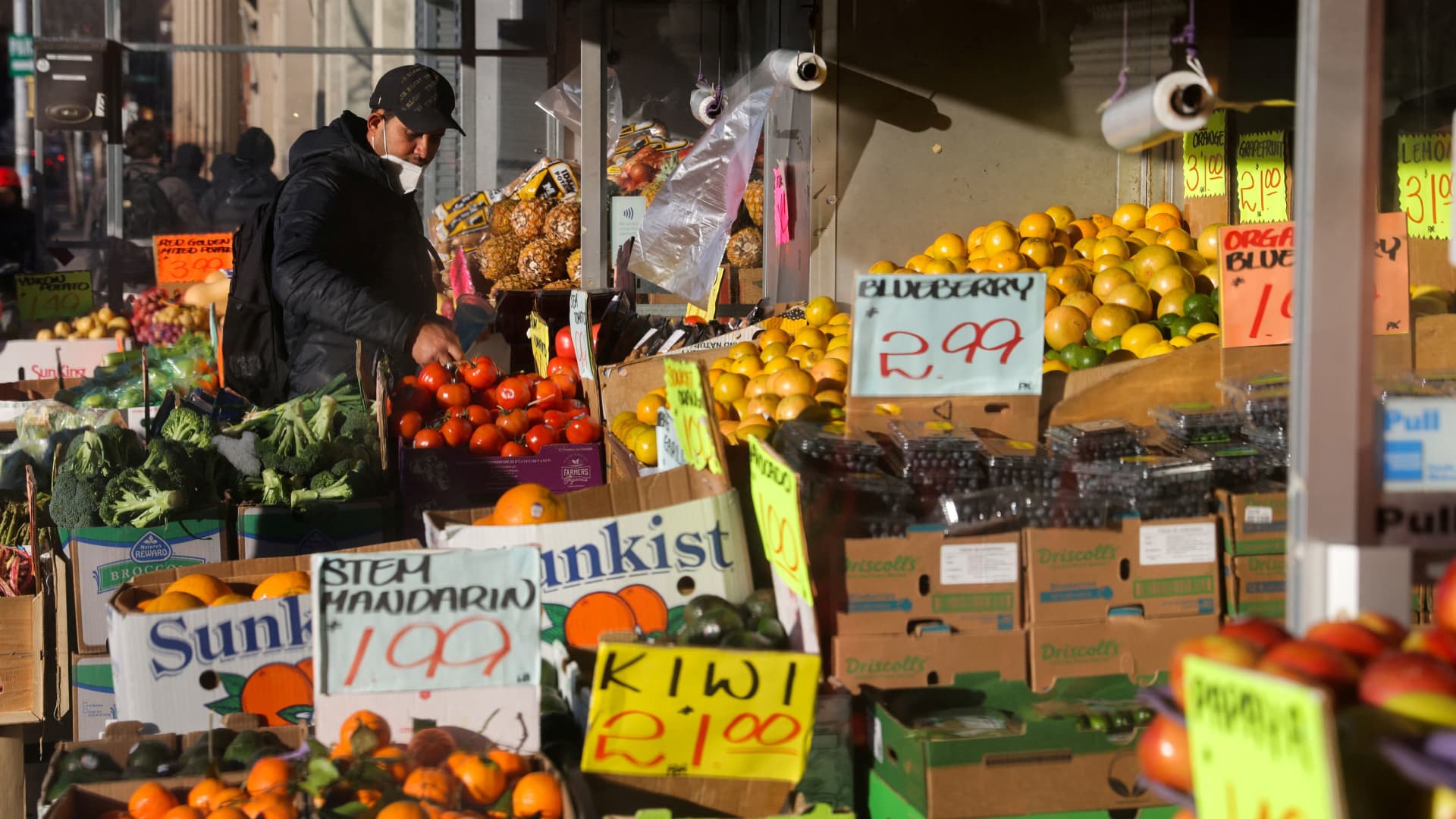 Prices of fruit and vegetables are on display in a store in Brooklyn, New York City, March 29, 2022.

But they also cautioned against getting too excited by the data, saying that prices are still far too high.

“One month of data does not a victory make, and I think it’s really important to be thoughtful that this is just one piece of positive information, but we’re looking at a whole set of information,” San Francisco Fed President Mary Daly said during a question-and-answer session with the European Economics and Financial Centre.

Daly and other Fed officials were speaking after the Bureau of Labor Statistics reported that the consumer price index rose 0.4% in October, below the 0.6% Dow Jones estimate. The data sent a possible signal that while inflation is still running high, price increases may have leveled off and could soon head lower.

While Daly said the report was “indeed good news,” she noted that inflation running at a 7.7% annual rate is still far too high and well off the central bank’s 2% goal.

“It’s better than over 8 [percent] but it’s not close enough to 2 in any way for me to be comfortable,” she said. “So it’s far from a victory.”

Kansas City Fed President Esther George noted that even with the lower monthly gain, inflation is still “uncomfortably close” to the 41-year annual high hit in the summer.

“With inflation still elevated and likely to persist, monetary policy clearly has more work to do,” she said.

However, she advocated a more “deliberate” approach going forward, noting that “now is a particularly important time to avoid unduly contributing to financial market volatility.”

Both Mester and George are voting members this year on the rate-setting Federal Open Market Committee.

The Fed has raised its benchmark interest rate six times this year for a total of 3.75 percentage points. That has included a string of four straight 0.75 percentage point hikes, the most aggressive policy tightening since the central bank moved to using the overnight rate as its principal policy tool in 1990.

Market pricing immediately reacted to the CPI news, shifting strongly to the likelihood of a 0.5 percentage point increase in December, according to CME Group data calling for an 85.4% probability of a half-point hike.

“Despite the moves we have made so far, given that inflation has consistently proven to be more persistent than expected and there are significant costs of continued high inflation, I currently view the larger risks as coming from tightening too little,” Mester said.

Other officials also were cautious.

Dallas Fed President Lorie Logan called the CPI report “a welcome relief” but noted more rate increases probably are coming, though at a slower pace. “I believe it may soon be appropriate to slow the pace of rate increases so we can better assess how financial and economic conditions are evolving,” she said.

No rate cuts in sight

Like Daly, Logan said the public should not interpret a slower pace of rate hikes to mean an easing in policy.

In particular, Daly said rates are likely to stay higher for longer and she does not anticipate a rate cut that market pricing indicates could come as soon as September 2023.

Earlier in the day, Philadelphia Fed President Patrick Harker indicated a slower pace is likely but noted the increases still will be significant.

Historically, the U.S. central bank has preferred to hike in quarter-point increments, but the rapid surge of inflation and a slow-footed response from policymakers when prices began surging early in 2021 made the more aggressive pace necessary.

“In the upcoming months, in light of the cumulative tightening we have achieved, I expect we will slow the pace of our rate hikes as we approach a sufficiently restrictive stance. But I want to be clear: A rate hike of 50 basis points would still be significant,” Harker said.

He added that he expects policy to “hold at a restrictive rate” while the Fed evaluates the impact the moves are having on the economy.