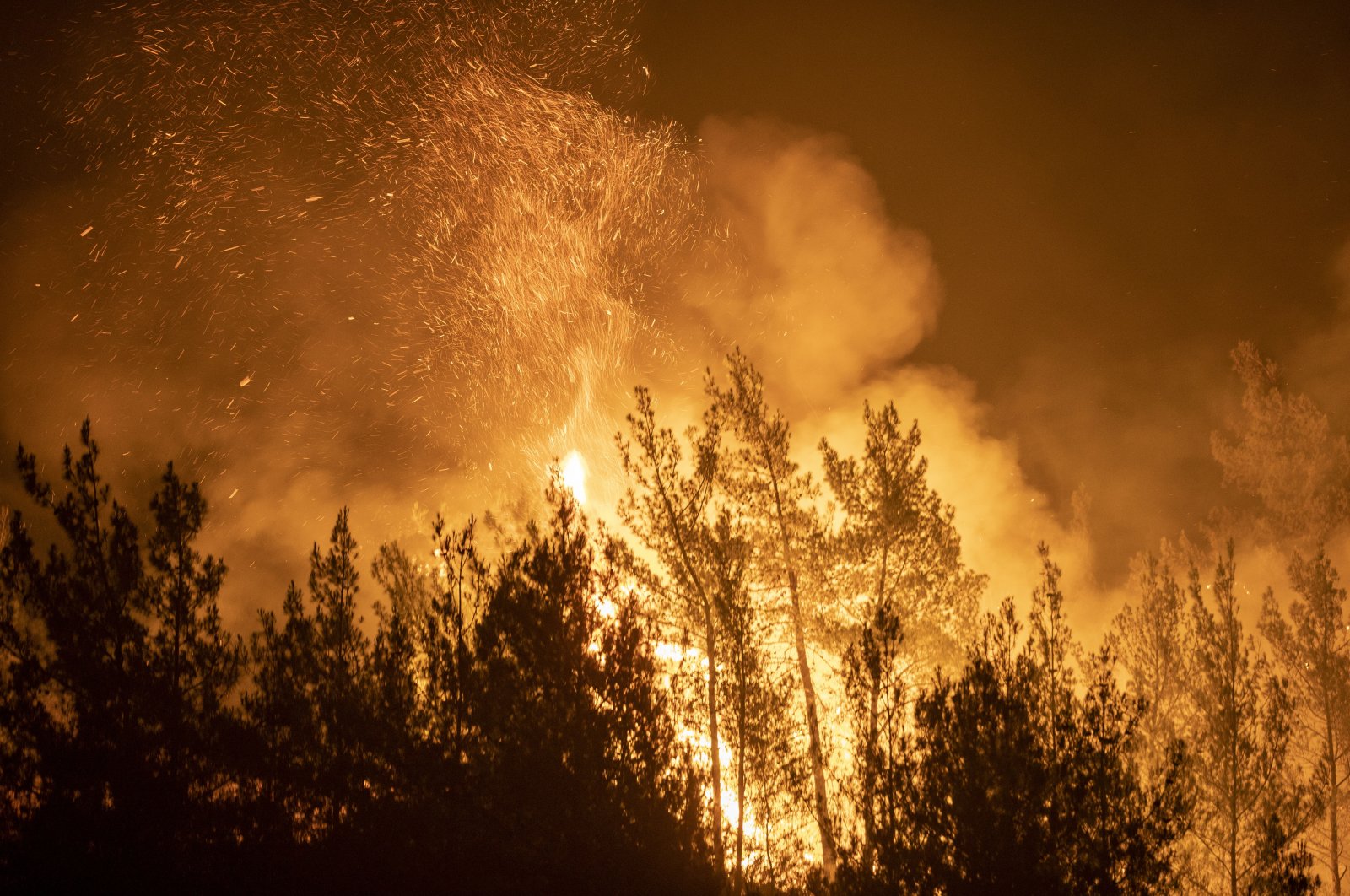 The first major forest fire of “fire season” gripped the southwestern Aegean town of Marmaris late Tuesday. Firefighters struggled to put out the flames that spread across a forest in the Bördübet neighborhood since the blaze broke out at around 8 p.m. local time.

The cause of the fire in the town located in Muğla province is still unknown. The flames spread in a short time due to winds.

The Disaster and Emergency Management Authority (AFAD) said 1,393 personnel, including 592 employees from the General Directorate of Forestry, responded to the fire as well as 338 vehicles and 35 pieces of construction equipment from various institutions and organizations.

Agriculture and Forestry Minister Vahit Kirişçi and Interior Minister Süleyman Soylu inspected the fire-hit area from the air. “It’s not a fire that should worry us much, given the current circumstances. But the position we are in right now is of course a bit critical,” Kirişçi said after the inspections.

The darkness challenged firefighters battling flames on the land with limited aerial support. When the sun rose, some 20 helicopters and 14 airplanes started dousing the flames in an area covering about 250 hectares (617 acres).

The site of the fire was a sparsely populated area, far from the busy streets of Marmaris, one of the most popular towns for holidaymakers in Muğla, along with Bodrum. Both towns suffered from devastating wildfires last year, losing a large amount of land to flames. As a matter of fact, last summer’s blazes were the most intense in Turkey on record, a European Union atmosphere monitor said last year, adding that the Mediterranean had become a wildfire hot spot. Human-induced climate change is making heat waves more likely and more severe, scientists say.

The country suffered from more than 2,105 forest fires last year that ravaged vast swathes of forests across Turkey. The fires that gutted hundreds of hectares of forests between July and August were the worst in recent memory to hit Antalya and Muğla, two neighboring Mediterranean provinces. They killed at least eight people, devastated villages and claimed the lives of a large number of animals. Soaring temperatures, low humidity and strong winds prolonged the fires, which prompted the evacuation of hundreds of people, particularly in villages near the epicenter of fires. Several countries had dispatched planes to help the extinguishing efforts. This year, the country reinforced its aerial fleet with 16 more helicopters and 17 airplanes, along with unmanned aerial vehicles (UAVs) for timely detection and response to the fires.