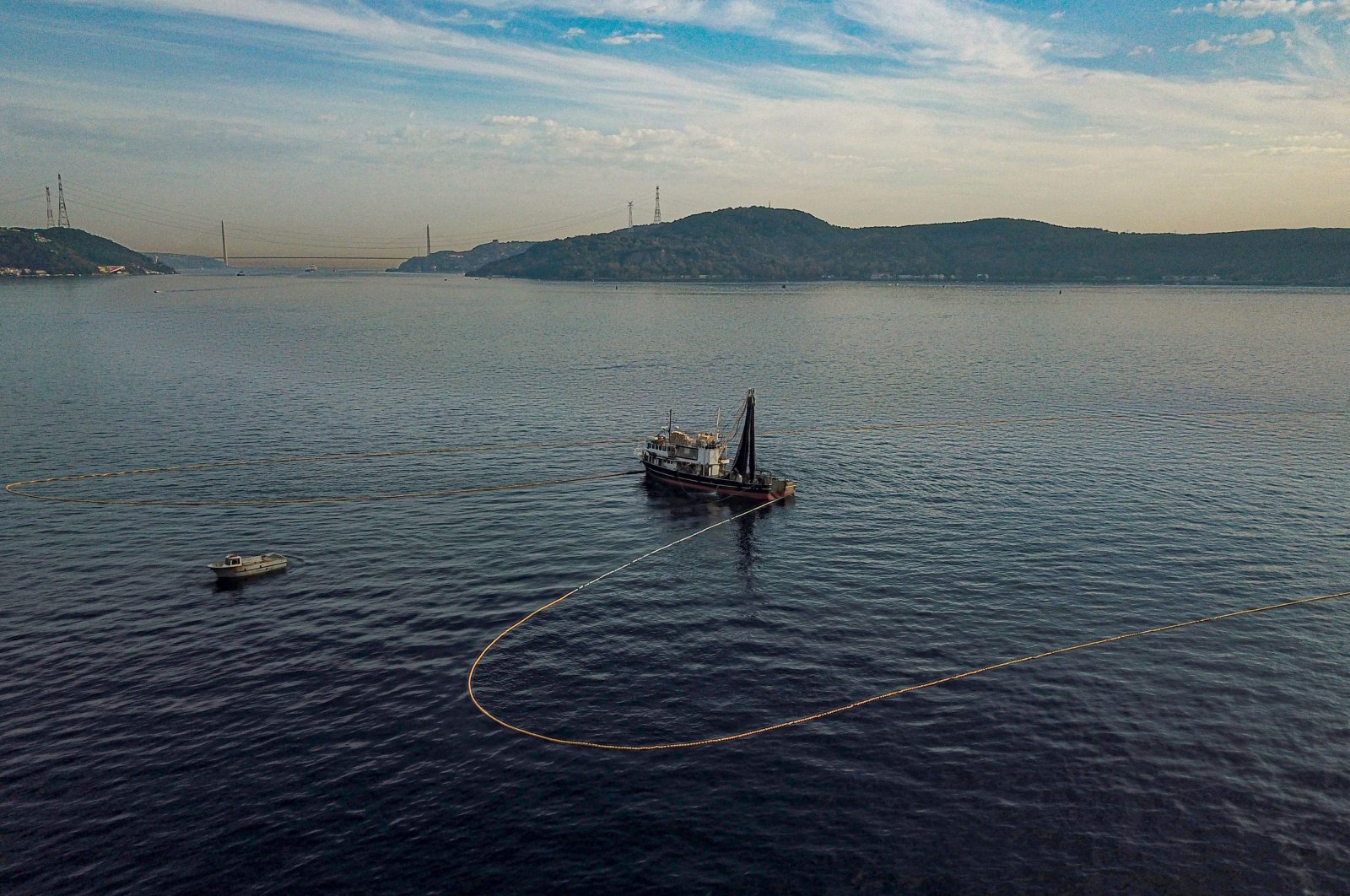 Amateurs or pros, fishermen on the coast of the Bosporus appear suffering from a fall in fish stocks.

Despondent Sunday anglers watched crestfallen as a trawler winched an enormous net out of the waters of the Bosporus. “Clear off!” they shout from the shore, impatient to get their hooks back into the depths of the strait that runs through Istanbul. “I have been here since 6 a.m. but a trawler came and dropped its nets. That blocked us completely,” grumbled Mehmet Doğan, fed up at only having caught one fish all day, a 40-centimeter (16-inch) bonito.

It is high season for the popular variety of tuna, with shoals teeming through the Bosporus on their way from the Black Sea to the Mediterranean. But pulled taut across the strait are fishing nets more than a kilometer (3,280 feet) long. Anglers like Doğan who cram shoulder to shoulder along the banks say the nets leave them with little chance, and the fish with even less.

Fish stocks in the Bosporus have plummeted, according to Saadet Karakulak of Istanbul University. In the space of a few years, hauls have fallen from 500,000 to 600,000 tons a year to 328,000 tons, she said, saying it is “proof that stocks are diminishing.”

“Because of these boats, the fish can’t enter the Bosporus,” rued angler Murat Ayhanoğlu, standing at Kireçburnu cove on the European side. “They can’t lay their eggs here.”

Nearby on the Görenler II, a 35-meter trawler, the crew heaved in a net weighed down with fish. There’s no chance of catching anything when boats like that are here, said Ayhanoğlu, as he reeled off a list of fish getting ever rarer in the Bosporus, horse mackerel, anchovy, picarel and bluefish.

“You can’t do that. Stocks are in danger … We need sustainability,” said Bayram Öztürk, head of the marine biology department at Istanbul University, about a decision by the government to close the Bosporus traffic to allow commercial fishing boats for half a day this month. The decision was later scrapped. He said it was high time for quotas on some species, with the anchovy currently threatened.

Plastic waste, pollution and heavy maritime traffic are also blighting fish stocks in one of the world’s business shipping lanes, warned Öztürk, who is also director of the Turkish Marine Research Foundation.

From container ships to tankers to bulk carriers transporting badly needed Ukrainian cereals to world markets, more than 200 ships a day pass through the Bosporus. With the strait only 760 meters wide at its narrowest point, Öztürk said fish stocks need to be managed by the region’s nations. “Fish don’t have a passport. They spawn on the Ukrainian side (of the Black Sea), travel to the Turkish side and might end up being eaten on a Greek island,” he said.

Competition between trawlers is “ferocious,” said captain Serkan Karadeniz as his boat waited to leave the quay to fish for bonito, having chased them all the way from its home port of Samsun on Türkiye’s northern coast. The Görenler has come from all the way from Çanakkale on the Aegean Sea.

“October to November is when the fish migrate the most, to the Marmara and Aegean,” said Erdoğan Kartal, head of Istanbul’s fishery cooperative. The 60-year-old, who has been fishing since he was a lad, said fish “are getting smaller and smaller.”

“We have started to catch fish that have never had the chance to spawn, which is dangerous.” He no longer sees the mackerel that were once so abundant. “Where are the beautiful mackerel that we used to eat every day?” Kartal lamented, saying quota and size limits should be set.

“We have to make some sacrifices,” he said. “If we let the fish pass, they will return.”