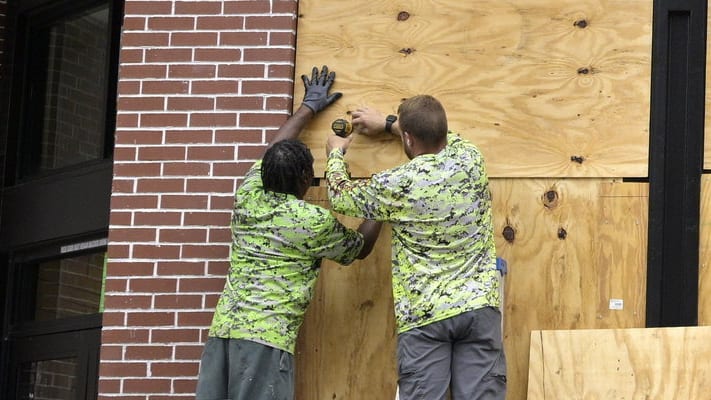 2.5 million people were fleeing Florida as Hurricane Ian approached the west coast of the US state. The hurricane continued to intensify.

The storm had already wreaked havoc as it crossed the western part of Cuba on Tuesday: a million people were without power there, houses were covered in the capital, Havana, and power poles were knocked down.

The first floods also occurred when the island chain “Florida Keys” was passed, when masses of water whipped up by the howling wind were pressed against the coast.

But: The “ground zero” for the impending storm disaster is likely to be the greater Tampa area. According to forecasts by the “National Hurricane Center” (NHC), the storm should roar ashore on Wednesday south of Tampa Bay and north of Cape Coral – where ex-pop star Michael Wendler (50) and his wife Laura (22) live.

With expected wind speeds of almost 200 kilometers per hour, severe storm damage and widespread power outages are feared. However, the greatest danger comes from the storm surge, which was predicted to be three meters high.

According to experts, Tampa Bay, where the flood effect is amplified, is particularly vulnerable. In addition, the impact of the monster hurricane coincides with what is known as the “king tide,” where there are higher tide levels under normal circumstances.

Tampa residents are now calling it a “storm of the century” because the metropolis was last directly hit by a hurricane in 1921.

Florida Gov. Ron DeSantis, 44, warned of “catastrophic flooding” from the “historic storm” as he urged Florida residents to stay safe. Millions of people were traveling inland, and many of the completely congested freeways became parking lots.

7,000 soldiers of the National Guard were mobilized in advance, and a state of emergency had already been declared in all districts of the (other) “Sunshine State”.

The international airport in Tampa was closed Tuesday at 5 p.m. (local time). BILD landed with one of the last machines.

However, some residents in the red tide zones want to stay, despite evacuation orders: “I will either survive or drown,” posted a woman, who also lives in a basement apartment, defiantly on social media. Alarm sirens sounded in flood-prone areas.

At Holmes Beach, Theresa Yassa takes a quick walk on the beach before the storm hits. She also chose to stay, even though her home is in an evacuation zone.

“I feel reasonably safe there, but it’s a little queasy when the neighbors pack their things and flee,” she says to BILD as the first drizzle drips onto her umbrella. She especially didn’t want to leave because of her pets, a cat and two dogs.

Having experienced hurricanes before, she says, “It can be pretty scary!” But she hopes things will go well this time.

Devastation is also expected inland: Hotel reservations have already been canceled for some holidaymakers in the mega amusement park “Disney World”. The park will remain closed on Wednesday and Thursday.

In Miami, too, far away from the storm track, the hurricane’s outer rain bands caused torrential rain. Parts of the nightlife district of Brickell were under water.

After almost panic buying hamsters, shelves in supermarkets in South Florida remained empty. Business owners and homeowners nailed up their facades with sheets of plywood and erected sandbag barriers. Residents filled petrol canisters at petrol stations, as the petrol supply is also likely to come to a standstill.

Florida is arming itself against the force of nature as best it can… Now the storm is coming.