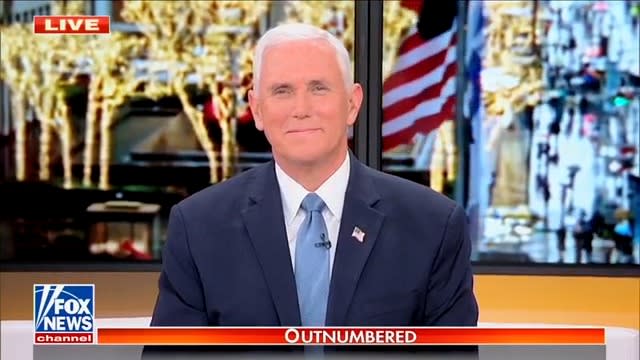 With Rupert Murdoch’s media empire making a concerted effort to move on from Donald Trump ahead of 2024, Fox News provided Mike Pence a one-hour showcase on Wednesday as the ex-vice president positions himself for a White House run.

“How do you know that that is God calling you? Because everywhere you go, people love you,” one-time Trump acolyte Ainsley Earhardt gushed to Pence at one point.

In recent weeks, Murdoch’s media outlets have taken a shiv to Trump following the GOP’s disappointing performance in the midterms. Blaming the lack of an expected “red tsunami” on the twice-impeached ex-president pushing extremist candidates, the editorial boards of the New York Post and Wall Street Journal have called on GOP voters to dump Trump and back someone else in 2024—namely, Florida Gov. Ron DeSantis.

In fact, after Trump announced this month that he was running for president again, the Post roasted its once-favorite politician with the below-the-fold headline of “Florida Man Makes Announcement.” The paper wrote: “If elected, Trump would tie Joe Biden as the oldest president to take office. His cholesterol levels are unknown, but his favorite food is a charred steak with ketchup.”

Pence, who is quietly building a 2024 campaign team, stepped in as a co-host of Fox News panel show Outnumbered on Wednesday, ostensibly to promote his latest book.

Perhaps because they had a former vice-president serving as a guest host, the network stacked the panel with Fox News anchor Martha MacCallum and Fox & Friends’ Earhardt and Carley Shimkus, alongside regular co-host Emily Compagno.

Towards the end of the hourlong program, Pence was finally asked about his potential 2024 plans. “My first question is do you want to be president of the United States?” MacCallum wondered.

“I can tell you that public service animated my youth as I write about in my book, the opportunity I had to represent my hometown of Congress, the governor of Indiana, and ultimately serve as the vice president. Karen and I will take time over the holidays,” he replied, mentioning his wife. “We have two in the military, so between deployments, our kids have not been in Indiana for the last three years together, so we will take time to reflect, deliberate. We are going to make a decision about what this calling is.”

After again saying he’d get a “sense of calling” from Christ on whether to run or not, Pence was then asked by Earhardt how he’d really know if God wanted him to be president.

“I want to ask you a question about your faith, because we share the same faith, but how do you know that that is God calling you?” the Fox & Friends star declared.

“Because everywhere you go, people love you. Even Democrats love you because you’re just a nice, wholesome, good person who does the right thing,” she gushed. “And you’re honest. You’re honest. But they might not like your politics, but they like who you are and your character. So how do you decipher if they’re just saying, I like you or we really want you to run?”

The former vice president responded that he has “a fundamental distrust of my own ambition,” adding that he is “also very wary of praise.” At the same time, he said his decision to run would come down to the question: “Is there not a cause?”

Despite Earhardt’s claim that people “love” Pence “everywhere” he goes, recent approval polls show that there isn’t that much support for the former Indiana governor. A recent YouGov survey found that just 37 percent of Americans have a favorable opinion of Pence—including just 56 percent of Republicans, a very soft number for a prominent conservative.

Furthermore, Pence has drawn very little support in 2024 GOP primary polls. Morning Consult, for instance, shows only seven percent of Republicans would vote for him if the primary were held today—compared to 45 percent for Trump and 30 percent for DeSantis.

Of course, Pence’s lack of support among the GOP base may not be that surprising considering that MAGA rioters called for him to be executed at the Jan. 6 insurrection because he wouldn’t overturn President Joe Biden’s electoral victory. Since then, Trump has ruled out Pence as a 2024 running mate, claiming he “committed political suicide.”

Pence, meanwhile, has continued to distance himself from the ex-president, stating that Trump “endangered” him and his family during the Capitol riots.