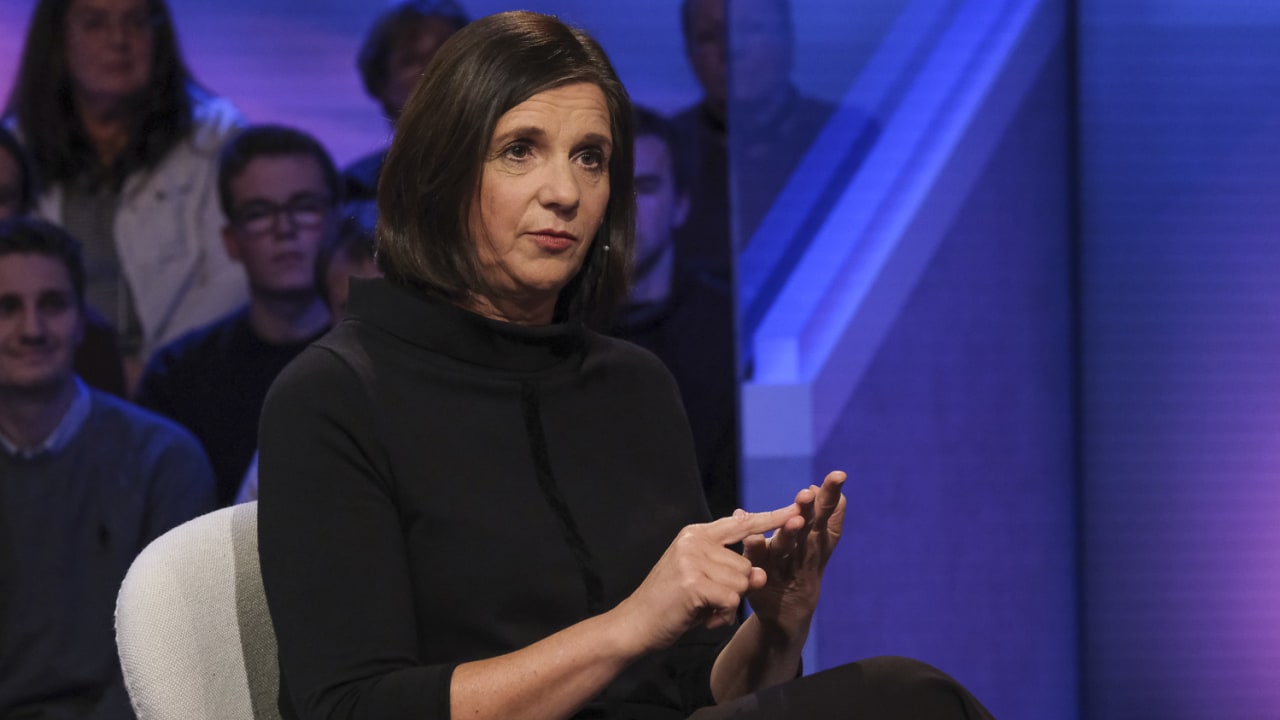 Waiting for the autumn of anger, Germany in the crisis maelstrom, election theater like in Soviet times, Putin’s pipelines suddenly perforated – lots of pepper for Sandra Maischberger’s talk smoothie!

︎ Katrin Göring-Eckardt (56, Greens). The Vice President of the Bundestag etches on Twitter: “One wonders what values ​​people are shaped by who, like Margot Käßmann, think that Ukraine is nothing to do with us.” EKD, oh dear: ex-church councilor puts down ex-bishop!

︎ Julia Klöckner (49, CDU). The economic policy spokeswoman for the Union faction sounds the alarm: “Made in Germany is at stake. There is still no real help in sight for companies!”

▶︎ Florence Gaub (45). The military expert makes it clear: “Without the USA, Ukraine would no longer exist today!”

︎ Markus Feldenkirchen (47). The journalist (“Spiegel”) is “absolutely in favor of phasing out” nuclear power, but thinks the “extension by a few months is right in the current situation”.

▶︎ Cherno Jobatey (57). The journalist (“Focus Online”) says: “I’ve always been an opponent of nuclear power, I even got points deducted when I graduated from high school, because back then in old Berlin everyone was in favor of nuclear power.” Uff – Abi was in 1985!

︎ Kristin Schwietzer (39). The Berlin ARD correspondent, who grew up “behind the wall”, believes that the nuclear power plant extension is now needed.

“Spiegel”-Feldenkirchen finds it particularly “problematic with the controversial extension of the term, how the public is latently taken for fools on this topic”.

Regarding the Economy Minister’s claim that the reason for his decision were difficulties in the French nuclear industry, “Focus”-Jobatay says: “Now you can pull that out of the box! I understand Mr. Habeck’s troubles, that he has to get his party around, but I didn’t believe it.” Boom!

“He needed an additional argument,” confirms Feldenkirchen, “because just a few weeks ago he had announced this non-solution: The nuclear power plants remain in standby mode, everyone should continue to work there, all costs are incurred, but it is not used for electricity production.”

His harsh verdict: “The stupidest of all solutions, just for fear of the green basis! Now it’s going to be a stretching operation…”

“He was a rock star among politicians,” Jobatey explains the Habeck hype. “I went with him to Flensburg. People screamed as he passed.”

“Really?” the talk show host marvels. “What then?”

The “Focus” man raises his fists and yells: “Hey, Robert!”

But the colleague from “Spiegel” lets the air out of the story: “But Habeck also comes from Flensburg,” he recalls. Oof!

For the main fight, the CDU politician wears so much green that it couldn’t be greener, while the Green politician appears in the deepest black. Color theory the other way around!

Göring-Eckardt, a Protestant theologian and grandmother of five, praises the idea of ​​dimming the Christmas lights: “My Christmas tree has candles and no fairy lights anyway,” she reports. “The municipalities are right to think that we don’t have to illuminate all streets twice or five times all the time.”

Klöckner, Catholic, studied theology, two stepdaughters, says: “We still have a relatively small dog, so it wouldn’t be a good idea with the candles. I don’t think that switching off the Christmas tree will get us the energy transition.” Ehz!

Göring-Eckardt first lashes out at the CDU leader: “Friedrich Merz said very quickly: gas embargo,” she reproaches, but in the meantime she doesn’t have a much better idea herself: “We’ll have to get by without Putin’s gas. It’s a tough task!”

“Partisan politics were involved for far too long!” Klöckner countered. “Mrs Göring-Eckardt said in the summer: Whoever is now leading the nuclear power debate only wants to choke on us Greens. But it’s not about party politics and green soul! It’s about facts that aren’t only facts when the Greens recognize them!”

“We need all-in,” demands the CDU politician. “We need the energy from our nuclear power plants. They would have to run until the end of 2024 in order to send a clear signal to the market.”

“You actually once said: This is a sham debate,” Maischberger argues against the Greens. “Now it’s your business minister who has to let them keep going. So obviously it wasn’t a sham debate!”

“It’s a sham debate,” insists Göring-Eckardt, raising his index finger. “It’s the pseudo-giant of German politics: we act as if nuclear power would save us from the dilemma!” But that could only “help a little bit”.

In the middle of it, a Maischberger assistant suddenly appears and tinkers with Klöckner’s headset. “Obviously we have a sound problem,” the talk show host reassured the CDU politician. “Do not Scare! The young man doesn’t want to stab you. He just wants to make sure you can be heard.”

After that, the Greens made fun of their favorite opponent: “That’s because we have so few lines in southern Germany,” she rants, “because the sun doesn’t shine in winter and Mr. Söder has solar systems, but no wind turbines, and neither do the lines wanted to build…”

“I’m happy to talk about nuclear power,” she adds ironically, “if someone says to me: Yes, the repository will come into my constituency.” Heidewitzka!

“Bayern is number 1 in photovoltaics and number 1 in biomass,” Klöckner fires back. “By the way, you’re not the last when it comes to wind energy – that’s your green party friend, Mr. Kretschmann!”

Most important clarification: “We do not want an exit from the exit. But if you have a turning point with this pressure, then we have to do everything we can to lower the energy price.” And that means, according to the CDU politician, “that not two, but all three nuclear power plants go online.” Horrido!

The talk show host has had enough of the party banter and puts the Greens on the pot: “We are having a discussion about a gas price brake, which many would like, but where it is not at all clear: When will it come?” What is the price to pay?”

︎ “Nevertheless, it is clear that we will have a solution for the gas levy by the end of this week,” said Göring-Eckardt. “We govern, and that’s why it’s worth every effort that at the end of this week it will be clear: how do we ensure that gas prices remain affordable?”

Maischberger immediately jumps in: “What exactly are you going to propose? That would be really important now!”

But since the Green holds her paper very close to her chest: “I can’t give you an example,” she replies, “because that would only lead to more confusion. There are different things that are discussed.” Then she repeats everything that was ever discussed. phew! Where’s the buzzer?

“I really have to go in there now,” protests Klöckner. “The way we’re talking here, if I were a master baker! This government is incapable of making decisions. We don’t have time for this! We need decisions!” There’s a lot of applause for that.

In the end, the two politicians tied each other so tightly that Maischberger had to cut a Gordian knot: “We got it for today. We’re excited to see what comes out. Many Thanks!”

“Some would think that Putin has now achieved his goal, these areas where people speak Russian,” says military expert Gaub about the sham referendums in Ukraine. “Then you just leave it to him, and then maybe the war will be over.”

Mistake! “In fact, that’s not the case,” the expert makes clear. “Russia has still not achieved its goals. The referendums are another chapter in this war, which should result in Ukraine being an unviable state.”

For Gaub, the mobilization is “a sign of weakness” because: “Russia has lost a great many men.” The new soldiers are only “cannon fodder”. She says of Putin’s nuclear threats: “Not the weapon, but fear is the weapon.”

“Statistically, a war between states lasts 15 months,” the expert concludes. Then it ends, “either because one side has clearly won, or because both sides realize that they cannot win”.

Her prediction: “War has an internal clock. This process cannot be accelerated from the outside. The question then arises: When does fatigue come? I’d guess, roughly, hip shot: probably spring or early summer. I’m afraid we’ll have it by Easter at the latest.”

quote of the evening

I’m not against arms shipments. I’m more the ‘swords to the airport’ department, not ‘swords to ploughshares’.

Fast speaking versus plain speaking, ideology versus logic, kirre will versus stand firm, lots of chili, but also a lot of dry bread: that was a talk show in the “Alarmrotte” category.