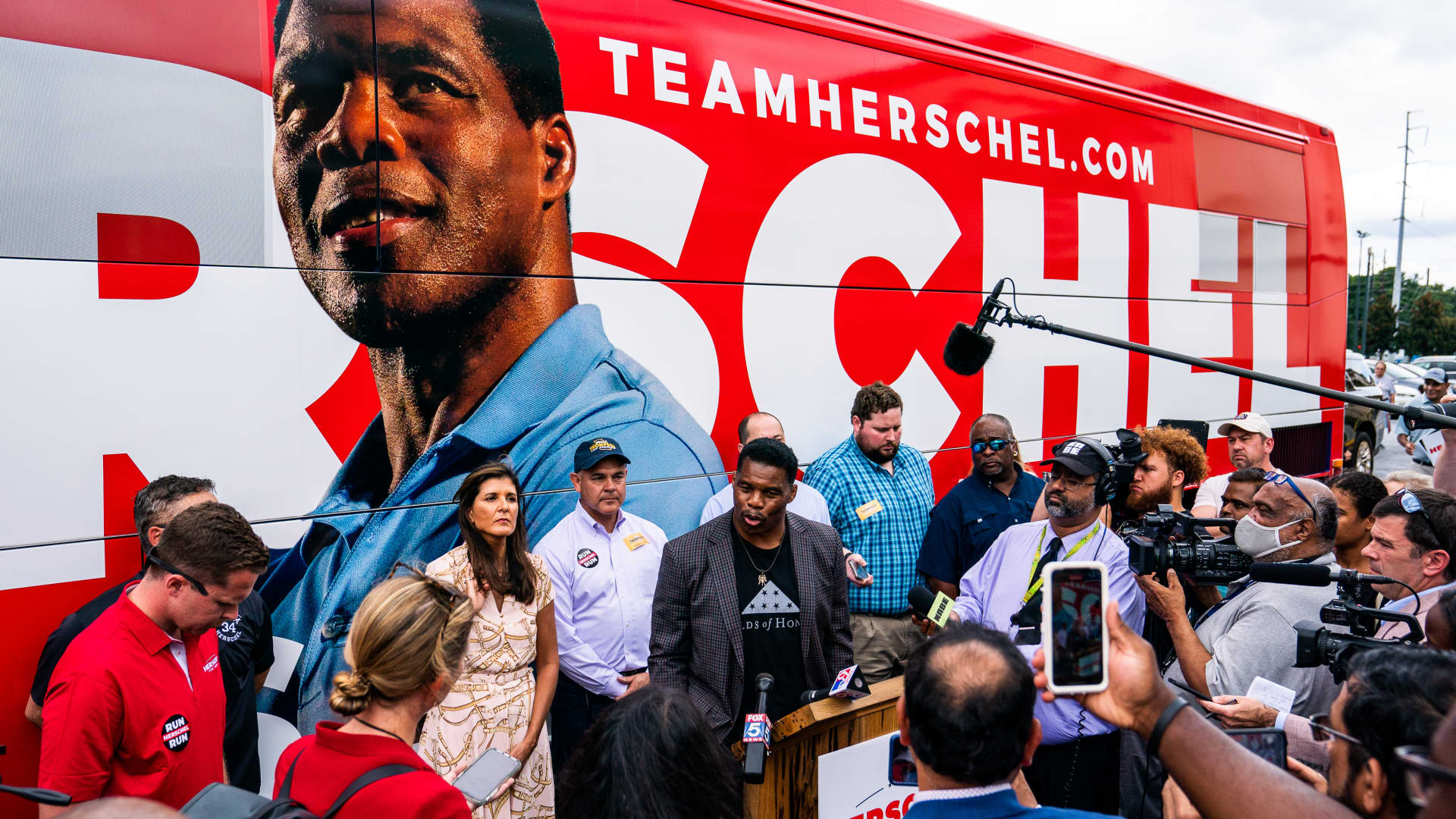 A woman who accused Senate candidate Herschel Walker of paying for her abortion in 2009 revealed that he urged her to end a second pregnancy, The New York Times reported Friday.

The woman, who was dating Walker at the time, told the newspaper that their relationship ended after she refused to have the second abortion.

Walker, who is running to unseat Democratic incumbent Sen. Raphael Warnock on a staunchly anti-abortion platform, has denied paying for an abortion in 2009. That accusation was first reported by The Daily Beast on Monday, in the final weeks leading up to the Nov. 8 midterm elections.

Walker’s Republican campaign did not immediately respond to CNBC’s request for comment on the Times’ latest reporting, which indicated it was based on a series of interviews with the woman who has remained anonymous.

Walker has denied knowing who the woman is, despite reporting from both the Times and the Daily Beast that she is the mother of a son she had with Walker.

On the campaign trail, Walker has previously acknowledged having more children than the one adult son, Christian Walker.

The anonymous woman who accused Walker of urging her to have multiple abortions told the Times that Walker has barely been involved in the life of their now 10-year-old son. The Daily Beast reported that Walker had previously confirmed that this woman was the mother of one of his kids, even though he appeared to claim that she was not when journalists asked him about it on Thursday.

The woman, identified as a Democrat, wants Georgia voters to know how Walker has treated her, the Times reported.

She told the newspaper her second pregnancy with Walker came two years after the first one, when they both agreed to have an abortion. Walker again did not want her to go through with the pregnancy, she said, but she did this time. The relationship ended in September 2011, and the woman’s son was born the following May, the Times reported, citing a paternity suit.

Christian Walker, a conservative media personality, has railed against his father in a series of angry online posts in the wake of the initial reporting about the alleged abortion payment. Christian also accused his father of being violent, neglectful and unfaithful to his family.

“Every family member of Herschel Walker asked him not to run for office, because we all knew (some of) his past. Every single one. He decided to give us the middle finger and air out all of his dirty laundry in public, while simultaneously lying about it,” Christian Walker tweeted Monday night.

As a Senate candidate, Walker has called for a total ban on abortion, and he recently said he has “always been for life.”

CNN reported earlier Friday that Walker’s campaign had fired its political director, Taylor Crowe. Spokespeople for the campaign did not respond when asked by CNBC to confirm Crowe’s departure.

Top Republicans, meanwhile, are sticking with Walker. Many of them have said they believe Walker’s denials, while some conservatives and allied entities have simply decried the reports as a politically motivated effort to damage the Republican ticket in Georgia.

The Peach State election could determine which party controls the Senate, and polling averages show Walker and Warnock are in a tight race.

“Herschel has properly denied the charges against him, and I have no doubt he is correct,” former President Donald Trump, who has endorsed Walker, said in a statement Tuesday.