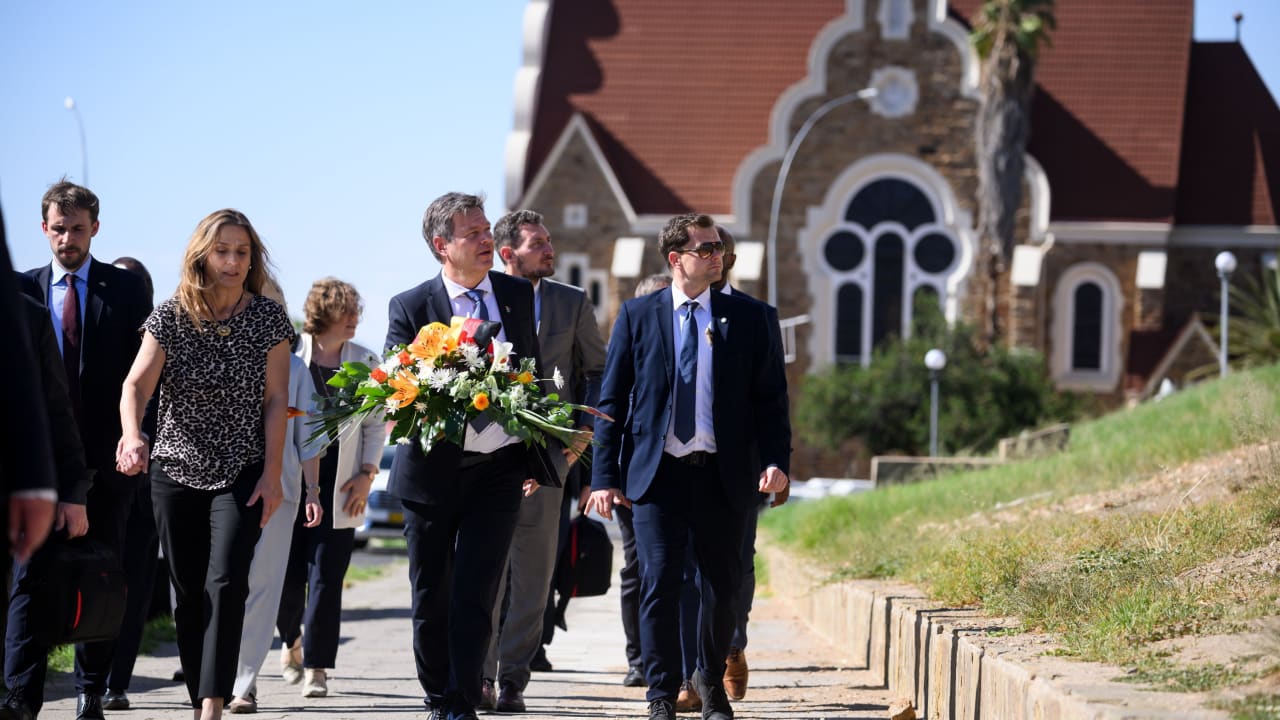 It could be THE energy carrier of the future: green hydrogen. The traffic light government relies on this resource and wants to produce hydrogen on a large scale in Africa – in the former colony of Namibia (formerly “German Southwest Africa”).

Their government is exulting, President Hage Gottfried Geingob (81) jokes self-deprecatingly that the visit of Federal Minister of Economics Robert Habeck (53, Greens) and his large business delegation to Namibia’s capital Windhoek this Monday is almost an “invasion”.

The size of the delegation underlines the importance of the project: the German investors want to invest billions in Namibia, produce green hydrogen on a large scale near Lüderitz on the Atlantic coast of the desert country – and thus gain a significant contribution to the German “energy transition”.

On the edge of the area officially known as “Tsau-ǁKhaeb-(Sperrgebiet)-National Park”, a large project called “Hyphen” is planned to set up production of green hydrogen – with an investment volume of around eleven billion (!) Dollars.

That roughly corresponds to Namibia’s annual economic output, said Habeck. The country has high hopes for the production of desert hydrogen. It has much more potential and, according to conservative estimates, could cover up to three percent of global demand.

However, this requires a drastic expansion of the infrastructure around the Namibian coastal town of Lüderitz (around 12,500 inhabitants), which – if the plans are implemented with determination – would become a veritable satellite town with workers and engineers.

With strong winds and intense sunshine, the area has the best conditions for the project.

According to local estimates, around 15,000 workers are needed for the construction of the “hyphen” plant alone. Around 7,000 skilled workers would be needed for the operation. Many of them may also come from Germany.

► That would also mean a significant influx of German speakers in Lüderitz. You can see the colonial past of the place immediately, many houses and street names (Bahnhofstrasse, Bismarckstrasse) come from the time of Kaiser Wilhelm. However, there are only a few ethnic Germans left in Lüderitz – unlike in the capital Windhoek, for example.

The German company Enertrag is also involved in the project, which has been going on for a while. With regard to Habeck’s visit and the financing of the project, company boss Gunar Hering says that it is “extremely important” that it becomes visible that Germany is behind the project.

Namibia is betting that the country could potentially become the “Dubai of Southern Africa”. Because: The energy hunger of the world market is huge. In addition to green hydrogen and solar energy in the desert state, the former colony also has huge oil and gas deposits that are yet to be developed.

Accordingly, a remark made by Habeck caused a frown in the Namibian delegation. He welcomed the development towards green hydrogen, but was skeptical about developing Namibia’s gas and oil reserves.

A statement that annoyed some Namibian representatives. After all, the Namibians also want to use these sources of energy, the deposits of which have only recently been discovered, to develop their country, for example to catch up with their northern neighbor Angola when it comes to oil production.

The fact that a German minister gave advice on which resources the former colony was allowed to use was quickly seen as presumptuous or even “neo-colonial” by the Africans.

Habeck had already had initial experiences with Namibia’s President Hage Gottfried Geingob, who speaks a little German himself, on the fringes of the economic summit in Davos in May. There Geingob had irritated Habeck with jokes, for example with the joke that if the German minister wanted to travel to Namibia in December of all times, the state house would be “closed”. Reason: “We’re going to Swakop.”

An allusion to the Atlantic baths in Swakopmund, popular with Namibians at Christmas time, which many – including the German lighthouse – consider to be the “German Baltic Sea resort” of the ex-colony. The time around the turn of the year is peak travel time in Namibia.

At the time, Geingob’s self-mockery visibly unsettled Habeck, who, in view of the German colonial history, appeared extremely serious, which in turn was perceived as irritating by the cheerful Namibian delegation at the time. People there are happy to expand the good relations with the Germans even more – not least in the service of their own economic development.

This time, Habeck was a little looser, at least at times. However, his program was tight – for the minister, who had stayed in the Hilton on Independence Avenue (until 1990 “Kaiserstraße”), he continued to South Africa after the Namibia appointments.

The hydrogen produced in the future is to be converted into ammonia, transported by ship to Germany from 2027 and used in fertilizer production and the chemical industry, for example – and replacing natural gas.

RWE has already signed a declaration of intent to purchase green ammonia from Namibia. The energy company wants to build a terminal in Brunsbüttel by 2026, which could serve as a port of destination.

Background: Germany should be CO2-neutral by 2045. To achieve this, production processes, for example in the steel and chemical industries, have to be completely reorganized. Huge amounts of “green” hydrogen are needed, which are to be produced on the basis of electricity from renewable energies and then produced by the electrolysis of water.

Habeck said he sees everything that is building in Namibia, also in the “light of history”. Almost 120 years ago, Germany was guilty.

Background: From 1884 to 1915, the German Reich was the colonial power in what was then German South West Africa and brutally suppressed uprisings. During the Herero and Nama War from 1904 to 1908, the Germans committed a mass murder that is considered the first genocide of the 20th century. A camp where many people who were detained by Germans under horrible conditions died was on the “Shark Island” in Lüderitz. In memory of the genocide, Habeck laid a wreath of flowers in Windhoek at a memorial monument at the “Alte Feste”, a fort from the German colonial era. Hereros and Namas were also imprisoned there.

The federal government and the Namibian government have agreed on a reconciliation agreement that still has to be ratified by the parliaments. While both sides are striving to finalize the deal, talks have recently been seen as deadlocked.

For him, the hydrogen project and German history are not completely separate, said Habeck, even if his interlocutors in Namibia did not address it. For him personally, too, it is crucial that the project benefits the people of Namibia.

Habeck: “The last thing we can accept is some kind of green energy imperialism.” That would mean that Namibia would develop energy, Europe or Germany would siphon it off and leave the country alone again.

Well-intentioned words that also have the potential to make Namibia’s officials nervous. Reason: Just a few weeks ago, the left-wing activist and short-term mayor of the capital Windhoek, Job Amupanda (35), caused a sensation with the claim that “Germany” was allegedly co-writing Namibian laws relating to energy projects.

Namibia’s government officials do not want to encourage such propaganda, nor do they want to feed the headlines with new fuel. German warnings and reminders on their own behalf are of little help to them. The Namibians rely on pragmatism in dealing with Germany, see great potential to have more parts of the population out of poverty with the investments.

Habeck stressed that Germany was making Namibia an offer that might differ from “energy-hungry” economies. Germany wants the country to develop more, that people are qualified, that they find jobs and that unemployment falls. The energy supply for Namibia and its neighboring country South Africa could become more robust and climate-friendly. Pipelines are planned.

Lots of German heritage in Namibia

Despite its brutal colonial history, Namibia itself is relaxed about its German heritage. Even today, German is taught as a language at many state schools. There is a German-language daily newspaper in the country, two German-language radio stations, numerous German place and street names, and tourists from Germany are an important source of income for the country.

In 2013, in the future “hyphen” location in Lüderitz, numerous people fought against a renaming of the city that was being considered at the time – most of them black residents at the time. Although the place is named after the Bremen merchant and colonizer Adolf Lüderitz, the name “Lüderitzbucht” is considered by the people in the coastal town to be a source of identity. They also call themselves “Bights” in their local languages. (with dpa)