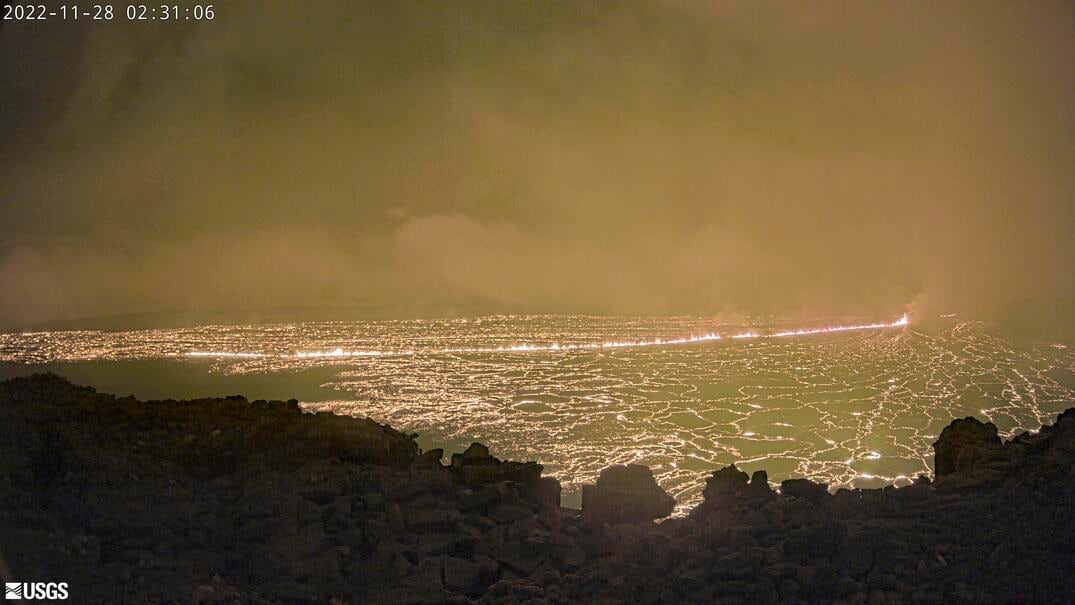 The eruption started around 11:30 p.m. local time in Mokuaweoweo, the summit caldera of Mauna Loa, inside Hawaii Volcanoes National Park on Hawaii’s Big Island. Its last eruption was in 1984.

Officials from the USGS said that lava is contained to the summit and does not threaten communities down the mountain. But they advised that winds could carry volcanic gas and fine ash downwind.

An ash fall advisory was in effect through 10 a.m. Hawaiian Standard Time on Monday, or 3 p.m. Eastern Standard Time, for the Big Island and across the Maui Channel to the southeastern shores of Maui. The National Weather Service in Honolulu, which is about 190 miles to the northwest of Mauna Loa, said as much as a quarter of an inch of ash could accumulate across the Big Island, potentially causing respiratory distress for some people, damaging engines and electronics, and harming crops and livestock. Though lava flows were not threatening any communities early Monday, that could change depending on whether and in which direction they might flow down the mountain — for example, eruptions in 1984 and 1950 sent flows toward the towns of Hilo and South Kona, respectively, the National Park Service said. The flows can take anywhere from hours to weeks or months to reach communities, according to USGS maps.

“Based on past events, the early stages of a Mauna Loa eruption can be very dynamic and the location and advance of lava flows can change rapidly,” the USGS said.

Mauna Loa lavas are currently restricted to the summit, but things can change. Residents of the Big Island should familiarize themselves with this map showing the time it would take ML flows to reach different regions on its flanks. South Kona should pay particular attention. pic.twitter.com/iiNI4gvcZt

Mauna Loa, one of the Earth’s most active volcanoes, has erupted 33 times since 1843, according to the USGS.

The volcano, whose name means “long mountain,” is known as a shield volcano because it is significantly wider than it is tall. Mauna Loa makes up about 51 percent of the Big Island and rises 13,681 feet above sea level and some 30,000 feet from the seafloor, according to the National Park Service.

The USGS, which has a research camera posted on the north rim of Mokuaweoweo, published images from before and after the eruption.

The eruption could also be seen from space, captured by the National Oceanic and Atmospheric Administration’s GOES West satellite.

Mauna Loa is also home to an observatory on its north flank where measurements of atmospheric gases have been collected since the 1950s, including carbon dioxide and methane, known to cause climate change.