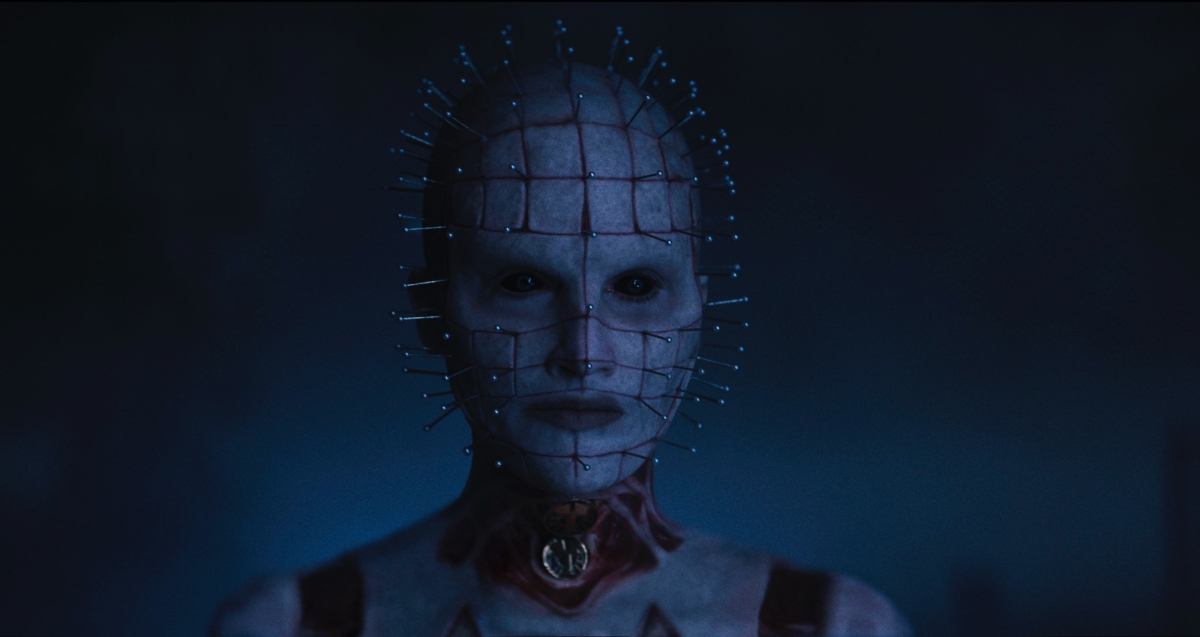 Clive Barker brought his novella The Hellbound Heart to the silver screen in 1987’s Hellraiser, which inspired one of the biggest horror franchises of all time. Unfortunately, the exhausting line of sequels begged for its legacy to finally have a much-deserved rest. The Night House director David Bruckner had his own sights to show the world in a new adaptation of Barker’s novella that is a return to form for the graphic horror franchise.

Riley (Odessa A’zion) is a young woman working through her drug addiction. She’s six months clean when she starts a relationship with Trevor (Drew Starkey), but her brother, Matt (Brandon Flynn), disapproves of him. However, their bickering only further pushes Riley into Trevor’s arms, when he then convinces her to help him break into a wealthy man’s shipping container to make some major cash.

Riley and Trevor come across an ancient puzzle box that they plan to sell, but they soon discover the horrors that come with it. They unknowingly summon the Cenobites, who continue to claim more lives. The pair must work together to find a way to end their rampage before it kills all those closest to them.

Hellraiser follows a strong-willed protagonist in Riley, although she’s going through a vulnerable time in her life. In addition to her drug rehabilitation steps, she can’t afford her rent, and family problems continue to mount. As a result, Riley plans to prove her brother wrong and change the trajectory of her life with a single heist that could allow her to build herself back up. Her desperation continues to set her into a panic, as she must overcome multiple hurdles before she can hope to face the Cenobites.

Ben Collins and Luke Piotrowski’s screenplay explores the shared curiosities and obsessions of the rich and the poor. Hellraiser taps into the human desire for ultimate control over their reality through class, but there is no such thing as absolute control. As a result, they find themselves at the merciless hands of the Cenobites that are angels to some, but demons to others. There’s a price for everything.

Each major character encounters their own battle with addiction. Riley’s happens to be substances, as she seeks an escape from her reality. However, other characters are tempted by power, love, greed, and other desperate yearnings that are inherent in many human beings. The Cenobites understand the pleasures of the flesh and find new, twisted ways to bring their sadomasochistic ways to their victims’ reality.

Bruckner recognizes many of the calling cards to Hellraiser and delivers on them. There’s a motif of chains that run through the film, directly tipping its hat to the terrifying presence of Pinhead, also called The Priest (Jamie Clayton). The result is a bloodbath that isn’t afraid to go all the way, refusing to cut away from the most gruesome moments. It certainly pushes the boundaries of what an R-rating would allow if this went through a traditional theatrical release model.

This iteration of Pinhead is appropriately androgynous, feeling more like an entity of death than a gendered being. Original Pinhead actor Doug Bradley will always remain iconic, but Clayton introduces a wonderful version of the character that never feels like a copy. She commands the screen in her own unique, intimidating fashion. Meanwhile, the human antagonist doesn’t quite manage to have the same threatening effect.

Brucker has some trippy visual tricks up his sleeve, especially as the environments change to accommodate the Cenobites. Some of the CGI enhancements fall a bit flat, but the kills themselves pack a grotesque punch.

Some of Riley and Trevor’s exposition-heavy investigations create lulls in the pacing for those who are already familiar with the franchise, but it allows newcomers the opportunity to jump into the story without skipping a beat. It engages some fairly straightforward slasher elements and doesn’t engage much past that, but it’s a very solid entry in the franchise. Hellraiser is a blood-soaked piece of nightmarish nostalgia packed with a fresh, gruesome bite to remember.

Hellraiser hooks right into streaming on Hulu on Oct. 7.

How to get help: In the U.S., contact the Substance Abuse and Mental Health Services Administration helpline at 1-800-662-4357.

RELATED: 15 Must-See 2022 Horror Movies for Halloween and Where to Watch Them