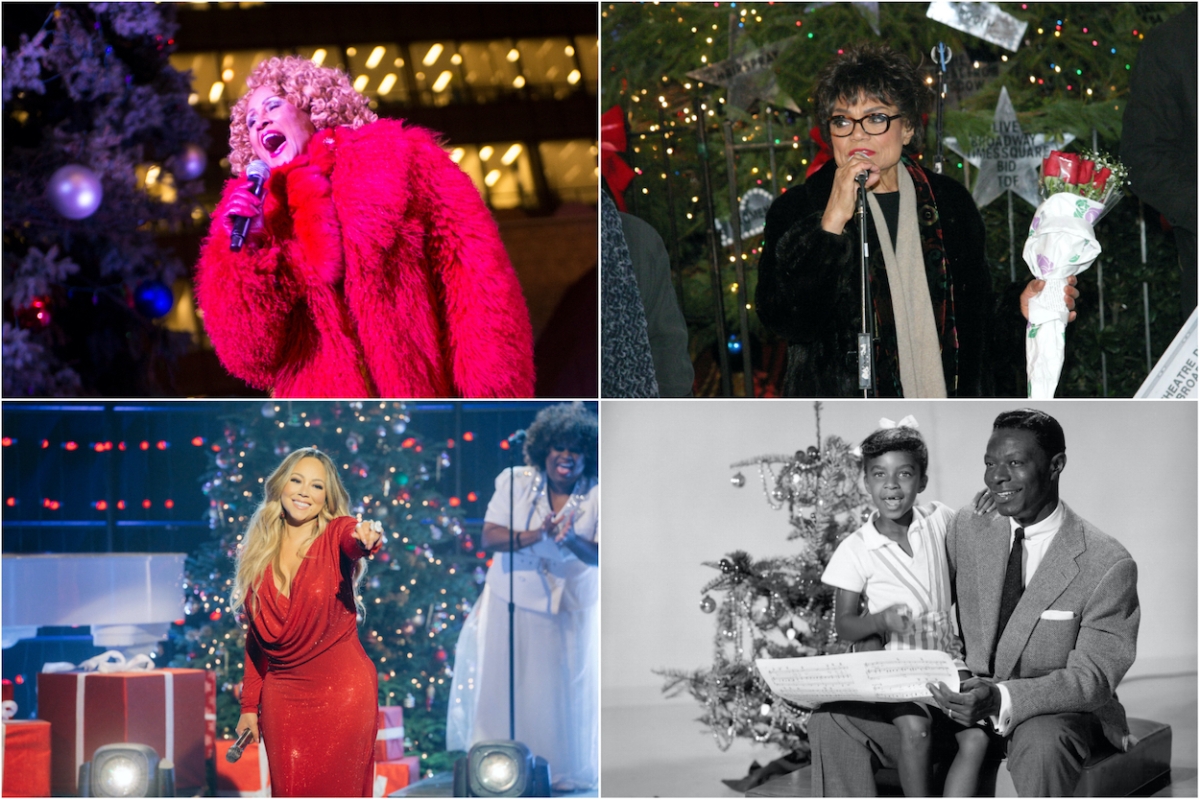 Hot chocolate and cookies might be the perfect pairing around the holidays, but sometimes you need musical accompaniment to take your celebration to the next level. Showbiz Cheat Sheet is here to help. Our team of music writers came together to create a holiday playlist for 2022 that mixes modern Christmas songs with tunes from years ago. Will there be snow this Christmas? We’re not sure, but the playlist being solid is a sure thing.

This holiday tune is a classic because of how soothing it is. Cole’s voice is angelic and fits the atmosphere of sitting around the fireplace in cold weather next to a Christmas tree. “The Christmas Song” is filled with beautiful Christmas imagery and is perfect for the whole season.

A Christmas classic, “Santa Baby” has been covered by artists from Madonna and Taylor Swift to Gwen Stefani and Michael Bublé. Nearly 70 years later, Eartha Kitt’s original rendition of the warm-and-fuzzy song — which was once banned in the south — still stands the test of time.

“Santa Tell Me” by Ariana Grande

Wouldn’t it be nice if Santa could tell you if the person you’re romantically interested in is also interested in you? That’s the world Ari has created in “Santa Tell Me.” But also, in this reality, it seems Santa is the one causing Ari to fall in love (“Don’t make me fall in love again”), which is a notable twist. A sort of Santa/Cupid hybrid. The world of the song aside, it’s a pretty danceable bop. You can’t say that about many holiday tunes.

The holidays are closely interwoven with family, friends, and nostalgia. This song, in particular, feels like switching on the radio to wrap presents on a Sunday morning or a late-night drive while looking at Christmas lights. It’s sweet, sentimental, and a little sad — the perfect holiday combo.

Cole’s one-of-a-kind voice pairs perfectly with this jaunty tune about the joys of picking out and decorating a tree around the holidays. Many people settle for artificial trees these days, but Cole’s song conveys the joy of stringing lights, hanging ornaments, garnishing the tree with garland, and enjoying the simple pleasure of a well-decorated evergreen (real or not).

“Christmas Wrapping” by The Waitresses

RELATED: 15 of the Most Festive Rock ‘n’ Roll Christmas Songs

As a complete departure from the melancholy vibes of a Joni Mitchell December, The Waitresses released “Christmas Wrapping” in 1982. It’s spritely and chaotic. It’s camp. It’s truly a hidden gem in the rock/alternative/indie Christmas scene. (P.S. the bass part in this song rocks).

“Carol of the Bells”

Is there a more iconic Christmas song than “Carol of the Bells?” Probably not. Whether it’s a cover by an artist or an instrumental version, it always slaps.

“Santa Claus Is Coming to Town” by The Jackson 5

“Santa Claus Is Coming to Town” is another classic Christmas song that many legendary artists have covered over the years. The Jackson 5’s upbeat and joyful take stands out among the countless other covers and remains one of the most unforgettable versions of the song more than half a century later.

“All I Want For Christmas Is You” by Mariah Carey

RELATED: 4 Holiday Songs That Are Just as Much of a Bop as Mariah Carey’s ‘All I Want for Christmas Is You’

Can there even be a holiday playlist without “All I Want For Christmas Is You” by the Queen of Christmas herself? Largely regarded as the most popular Christmas song ever, “AIWFCIY” has a simple message: Love is the greatest gift we can hope to receive during the holidays. Though the theme might be simple, Mariah‘s performance is anything but with truly inspired runs and a belt like a cannon made of crystal. She has other popular holiday songs, but this is the gem.

“Have Yourself a Merry Little Christmas” by Frank Sinatra

Originally sung by Judy Garland in the 1944 musical Meet Me in St. Louis, “Have Yourself a Merry Little Christmas” evokes a ton of nostalgia. It’s been covered by multiple artists, most notably Frank Sinatra, but each version is warm with a dash of melancholy, making it a quintessential Christmas song.

“What Child Is This?” by The Piano Guys

A variation of the English folk ballad “Greensleeves,” “What Child Is This?” takes the song’s melody in a Christian direction. Of all the religious Christmas songs, this one does the most to make the holiday feel mystical.

“Silent Night” is a Christmas classic that many artists have covered, but Stevie Nicks’ version is one of the best. Appearing on the charity album, A Very Special Christmas, Nicks’ “Silent Night” features some of her best contralto vocals. It’s hard not to imagine curling up on a sofa in front of a fire by the Christmas tree and listening to this song.

RELATED: This Is Bono’s Favorite U2 Song

Another Christmas classic, U2’s “Christmas (Baby Please Come Home)” is packed with emotion. You can hear the desperation and feeling in Bono’s voice, and it evokes goosebumps.

The man who once said he was no good as a drummer and shunned having the spotlight focused on his playing takes center stage on this holiday staple. Ringo plays a steady shuffle interspersed with tightly-played fills, and his limited vocal range suits the song well. It’s a celebratory take on a traditional holiday song that is pure Ringo through and through.

This energetic song captures the excitement of the holiday season. It’s very grand in its sound and mentions the various activities people do during this time of year. It’s easy to sing along to and stays in your head long after listening. Williams’ tune is almost essential to include on any holiday playlist.

One of Phil Spector’s masterpieces (holiday or otherwise), this tune boasts an impressive wall of sound that makes Darlene Love’s vocal anguish all the more powerful. Mariah Carey probably took a few of this song’s tricks for “All I Want for Christmas Is You.”