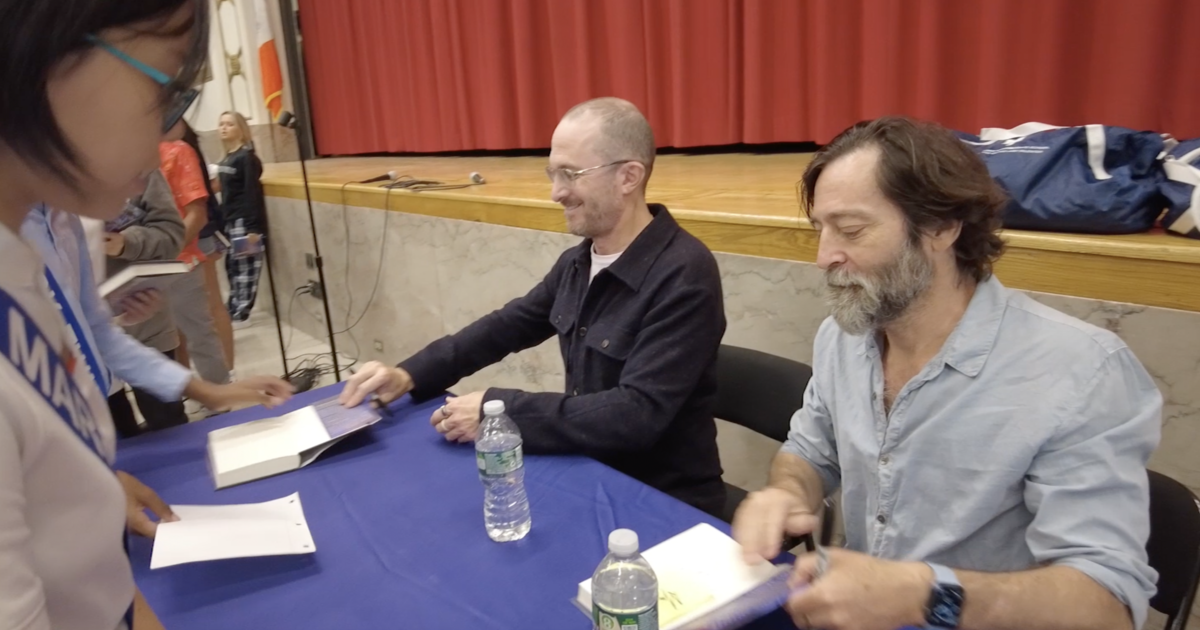 He was greeted by a standing ovation of 8th graders in a packed auditorium on Neptune Avenue.

It was not his first visit back; he was already induced into the school’s hall of fame a few years ago. This time, he came to talk about his new book, “Monster Club,” co-authored with his writing partner and friend, film producer Ari Handel.

“They had so much energy and enthusiasm and talent. That’s the well spring,” Handel said of the students.

“When I started working on this book,” Aronofsky explained, “my time here at Mark Twain was something that really inspired me to sort of bring back to life.”

The warmly welcomed duo signed copies and took questions from the future generation of movers and shakers.

“I’m more inspired to work on myself and what I really want to do in the future,” added Elene Surguladze, also in 8th grade.

The school’s drama students even put on a performance of an excerpt of the book, scrambling to get it together during the first full week of school.

“It was a very exciting piece to put together,” said drama teacher Peter Decaro, standing with his students after the performance.

The kids don’t have to go far to see the inspiration for the book because it’s set in Coney Island. Drawing from the rich history of the people’s playground, Aronofsky says it’s a story about childhood, imagination and change.

The school’s principal, Karen Ditolla, says she hopes that students who see a big Hollywood name who came from their world will have a stronger drive to succeed.

“Obviously, we have had a tremendous impact on Darren Aronofsky as a middle schooler, hence the fact that he wrote a book about us and he continues to come back. So education really, really is a huge force,” Ditolla said.

A children’s book is a new venture for the tenured director who mostly worked on psychological films for an older audience. But for this audience, it was a reminder that they, too, can dream big.

Have a story idea or tip in Brooklyn? Email Hannah by CLICKING HERE.