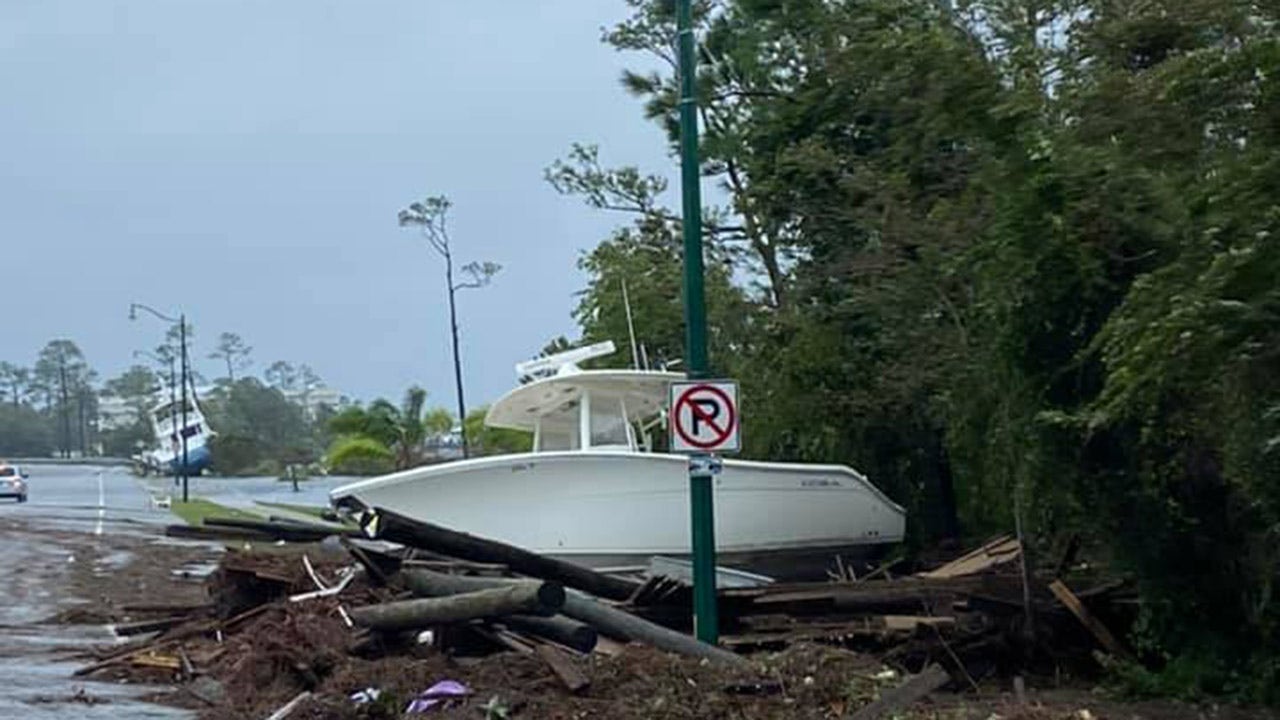 Politico tweeted a link to an article titled “DeSantis faces the true test of any Florida governor,” with the accompanying text, “Gov. Ron DeSantis spent his first term becoming one of the most influential Republicans in the country. But he still hasn’t faced one of the toughest challenges a Florida leader can encounter: a hurricane.”

Flooding and damage can be seen on Okaloosa Island in Florida after Hurricane Sally made landfall on Sept. 16, 2020.
(City of Orange Beach/Facebook)

Christina Pushaw, the rapid response director for the Ron DeSantis reelection campaign responded directly to the tweet, “Read that tweet again and ask yourself where you went wrong in life to end up doing this kind of ‘journalism.’”

She listed multiple critiques of Politico’s story in a separate post, calling out the author, Matt Dixon, directly.

“The premise of Matt Dixon’s story is false, in addition to being distasteful. Northwest Florida was hit by Hurricane Sally in 2020 … Also, Governor DeSantis has not only held briefings at the SEOC. He had a briefing in Pinellas yesterday, Sarasota today,” she wrote, with a link to a past story.

She also suggested that the media are cheering on the hurricane’s destruction of Florida.

“Florida has some of the world’s best emergency management leadership and personnel. Governor DeSantis and his team are doing everything possible to ensure our state is prepared. Sorry to disappoint liberal media activists who are constantly cheering for the destruction of Florida,” she tweeted.

A damaged business is seen in the aftermath of Hurricane Sally, Thursday, Sept. 17, 2020, in Perdido Key, Fla.  (AP Photo/Angie Wang)

Other Twitter users offered similar theories, slamming Politico as an example of the media rooting against DeSantis and the state of Florida.

“Here’s the media praying for Florida to get destroyed by hurricane, just so they can have something to make DeSantis look bad,” Commentator and Claremont Institute fellow David Reaboi wrote in a tweet.

“Fact Check: FALSE. Hurricane Sally hit Pensacola in September 2020, it was the most destructive hurricane to strike Pensacola in 16 years. Here’s @GovRonDeSantis at a briefing, committing to keep tolls lifted after our main bridge was destroyed. C’mon @politico,” he tweeted, with an image from the 2020 briefing.

Hurricane Ian was growing stronger as it barreled toward Cuba on a track to hit Florida’s west coast including Tampa as a major hurricane as early as Wednesday.
(DroneBase via AP)

Conservative commentator Virginia Kruta appeared to suggest that Politico’s piece was part of a long trend of Democrats and the media attacking DeSantis for any reason they can.

At some point in the afternoon, Politico edited the article to add the qualifier that DeSantis hasn’t faced a “major” hurricane, and wrote a note at the end reading, “CLARIFICATION: This story has been updated to add that Hurricane Sally affected the western part of the Florida Panhandle in 2020.”

Alexander Hall is an associate editor for Fox News Digital. Story tips can be sent to [email protected]