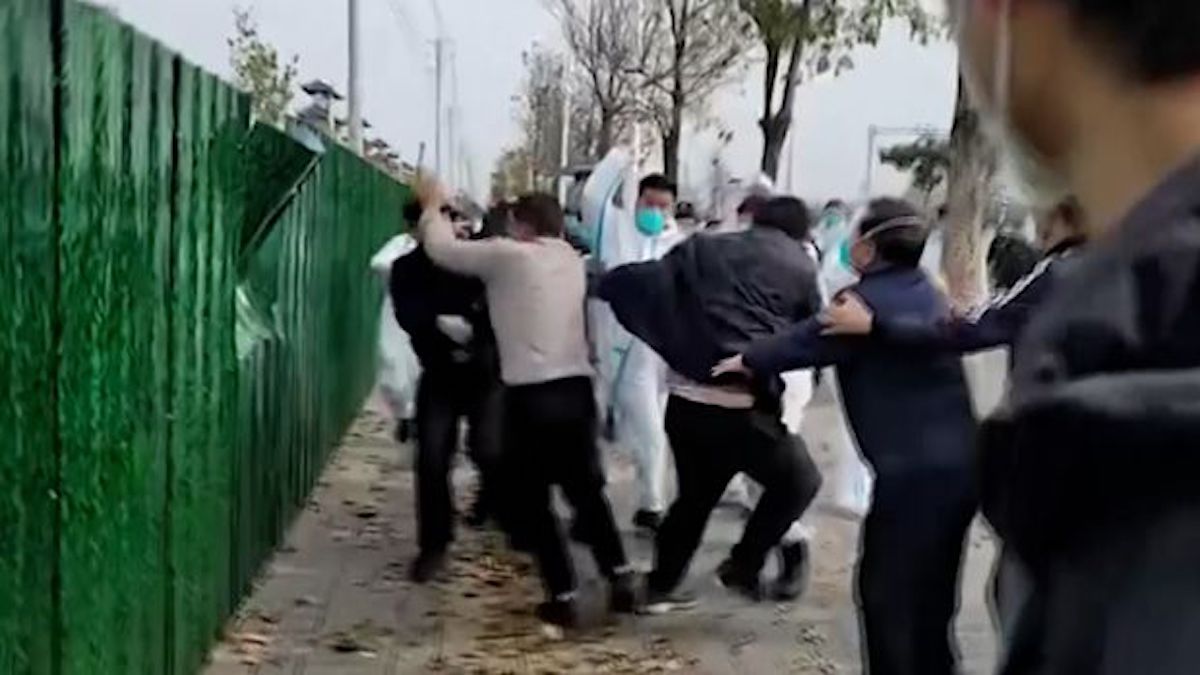 IPhone maker Foxconn imposed Friday a five-day anti-epidemic operation at its Zhengzhou-based factory in its latest bid to locate all Covid carriers and isolate them from the facility.

The anti-virus operation was launched after video footage showed hundreds of Foxconn factory workers clash with police on Tuesday and Wednesday. The company has since offered to pay newly-hired workers to leave the company to avoid further unrest, CNN reported.

The clashes are the latest imagery to put markets on edge as earlier hopes for a quick exit from “zero-Covid” measures start to wane. Covid cases have continued to rise since the central government unveiled on November 11 a 20-point notice to ease anti-epidemic rules.

On Thursday, China reported 32,695 new Covid cases, more than the daily peak recorded in Shanghai between March and May this year. More than 90% of the identified infected were asymptomatic, government officials said.

The anti-Covid measures are starting to impact social stability, including in economic hubs like Guangzhou and Zhengzhou where people and law enforcement officers have recently clashed over restrictions. Last week, residents in Guangzhou were seen tearing down barriers that surrounded their homes.

In late October, thousands of workers at Foxconn’s iPhone factory in Zhengzhou were seen in social media posts climbing the facility’s fences to escape lockdown measures, with some reportedly walking 10 hours to return to their home areas.

On October 30, the factory said it would double daily bonuses from 50 yuan (US$6.89) to 100 yuan for workers who could show up between October 26 and November 11. It also paid a premium to lure workers to return to the production lines.

But due to salary disputes, thousands of Foxconn workers rallied in the Zhengzhou Science Park on Tuesday and Wednesday. Citing an unnamed source, Reuters reported on Friday that Foxconn’s iPhone production in Zhengzhou could drop by 30% in November from normal levels due to the unrest.

Lou Yangsheng, party secretary of central Henan province, on Tuesday visited the Foxconn factory and urged the local government to restore order and ensure smooth operations at the facility.

Yang Guoxing, a Chinese expert on industrial agglomeration, said the Zhengzhou government should provide support to the Foxconn factory, which he said is one of the most important supply chains in the world.

Yang said that if the Foxconn factory could return to normal operations, the economy and job markets in Henan would be stabilized.

A Henan-based commentator said people should not defy the Covid rules as protests and riots would only make the situation worse. He said the government will further ease Covid rules when the coronavirus wanes.

However, a Beijing-based commentator said it is time to consider the “living with the virus” strategy as the current Omicron variant isn’t as lethal as previous strains.

He said people mistakenly calculated that the Covid-19 death rate in Hong Kong was 2.35% as 10,634 out of 452,483 Covid patients died. However, he said if natural deaths were deducted from the figure then the Covid death rate was only about 0.12%.

He estimated based on unclear modeling that if China eases its Covid rules then around 450 million people will be infected and 540,000 will likely perish. He said such a mortality figure seems high but actually is insignificant as 8.9 million people die in China every year.

On November 11, the central government announced that the standing committee of the CCP Central Committee’s politburo had decided to relax China’s Covid rules. It urged local governments not to expand without limits the scale of their lockdown measures or freely suspend classes, production and transport.

A State Council logistics task force told Xinhua on Friday that some local governments were still irregularly blocking domestic roads and interprovincial highways, although the 20-point notice urged against such measures.

It said local governments should ensure the smooth transportation of food and necessaries, and should not stop postal and express delivery services.

However, it has become increasingly challenging for local governments to cut off virus transmission chains without large-scale lockdowns, according to some medical experts.

Chongqing in Central China recorded 6,500 infections on Thursday, around 95% of which were asymptomatic.

The People’s Daily reported that the Chongqing municipal government will fully implement Beijing’s 20-point notice while achieving “zero clearance” at the community level within a short time.

The report said Chongqing has implemented strict anti-epidemic rules in high-risk districts and has urged people to stay at home since November 20.

Chinese Vice Premier Sun Chunlan visited Chongqing on Tuesday and Wednesday and ordered the municipal government to locate all the Covid patients at the community level and send them to quarantine centers as soon as possible.

Sun said Chongqing must ensure the smooth operations of its auto factories.

In Beijing, 1,845 cases were reported on Thursday, up from 1,611 on Wednesday. The city government locked down individual residential buildings where infections were found.

Some residents rushed to purchase food online as they were worried about potential wider lockdowns. Most online grocery shops stopped taking new orders as they were running out of capacity to deliver, reports said.

UAE: Man ordered to pay girlfriend Dh38,000 after refusing to pay loan she took for him