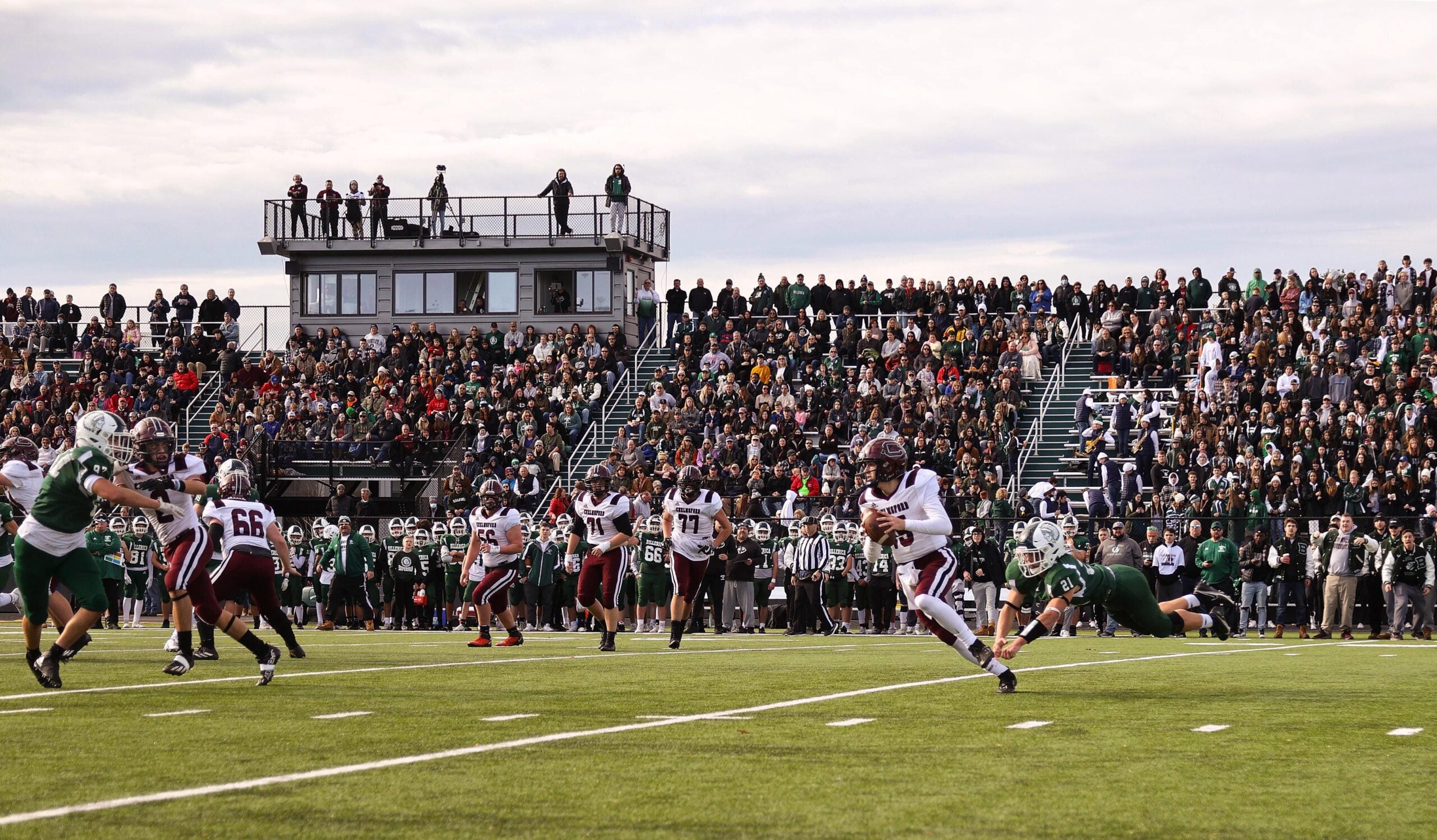 Following last year’s triumphant return, Thanksgiving rivalries continue as one of the Bay State’s storied sporting traditions. The Globe has more than a dozen reporters blanketing Eastern Mass to provide up-to-the-minute updates while you wait for the turkey to roast, the pies to bake, and the Patriots to kick off.

Do you know the closest Eastern Mass. rivalry?

How about the most lopsided one?

(Sorry, Framingham. Natick’s 79-33-5 all-time record against you takes the cake.)

Check out more cool statistics about Mass. Thanksgiving Day rivalries on this Globe interactive. You can even search and find out how your high school has fared in its game.

Between coaches facing their alma mater, players battling familiar foes, and seniors looking to cement their storied careers with one more milestone, there is no shortage of story lines on the gridiron this Thanksgiving.

▪ Wellesley at Needham (135th meeting) — The nation’s oldest public school rivalry is always played with an edge. A skirmish broke out toward the end of the 2019 meeting and Wellesley earned a narrow 34-28 victory in overtime last Thanksgiving to take a 65-60-9 lead in the series.

▪ Billerica at Chelmsford (96th meeting) — These teams hardly need any extra incentive, but the MVC Small title is on the line in this classic rivalry for the first time since 2005. Chelmsford is 30 points shy of setting the school record for points in a season and Billerica quarterback J.T. Green has topped 1,000 yards passing and rushing. Chelmsford leads the overall series, 62-28-5, as they play for the 91st time on Thanksgiving.

▪ Attleboro at North Attleborough (101st meeting) — After coaching at Attleboro for 10 years, Michael Strachan switches sides to his alma mater. His Rocketeers are coming off a disappointing 31-24 loss to Wakefield in the Division 3 state semifinals, but hold a 62-30-8 advantage in the rivalry.

▪ Mansfield at Foxborough (91st meeting) — Mansfield (8-2, 3-0) has cruised to three league wins after shifting to the Hockomock Davenport division this season, but Foxborough (6-5, 3-0) is looking to wrestle the league title away from the visiting Hornets.

▪ Wakefield at Melrose (112th meeting) — Wakefield coach John Rafferty (’70) has his alma mater marching to the Super Bowl after the first 11-0 start in program history. Rafferty coached at Melrose from 1992 to 2000, and Wakefield AD Brendan Kent was one of five brothers to play football at Melrose. Kent’s father, Jim, is a 22-year assistant at Melrose. Wakefield holds a 32-26-3 advantage in Thanksgiving meetings, but Melrose (62-42-7) leads the all-time series.

▪ Woburn at Winchester (121st meeting) — Last year, 1-8 Winchester gave 7-2 Woburn a thrilling finish in front of the largest crowd to attend a high school game at Fenway. In 2018, these rivals played to double overtime, and the all-time series is very close with Winchester holding a 55-53-12 advantage.

▪ English/New Mission at Boston Latin (135th meeting) — The oldest continuous rivalry prior to the forced hiatus in 2020 returned with English scoring a record 66 points in a win over Latin. Prior to that performance, Latin had won 52 of the previous 57 meetings to open an 83-38-13 lead.

▪ Peabody at Saugus (75th meeting) — Tanners senior quarterback Shea Lynch can break his own single-season records for passing yards and touchdowns and he only needs one more touchdown pass to break the career record in the Northeastern Conference. Junior Eli Batista is also on pace to break his own single-season records for receiving yards and touchdowns as Peabody looks to expand a 47-27 lead in this series.

▪ Framingham at Natick (117th meeting) — First-year Framingham coach David Wright has coached Natick’s Pop Warner A-Team and has five sons, including three stepsons, who have played for the Redhawks. Natick leads the series, 78-33-5.

▪ Weymouth at Walpole (25th meeting) — Another rivalry reaching the quarter-century mark this season, this clash between Bay State Conference foes shouldn’t lack for offense. Walpole senior Corey Kilroy has over 3,000 passing yards and 43 total touchdowns over the last two years and senior captain Andrew Falzone needs 146 rushing yards to reach the 1,000-yard mark. Walpole is looking to move to 20-5 in the series.

The schedule is set as eight MIAA state high school football championship games are slated for Gillette Stadium between Dec. 2-3. Three games kick off the slate on Friday, Dec. 2, followed by five more on Saturday. It’s the 15th year that Gillette has hosted the games, and the fifth time that all eight finals will be played in Foxborough.

Tickets are $17 for adults and $14 for students/senior citizens. Children 5 years old and younger will receive free admission. Tickets for the games are on sale now via Ticketmaster. No tickets will be sold at the Gillette Stadium Ticket Office.

▪ St. Mary’s 15, Rockland 14: St. Mary’s hangs tough on defense against Rockland to earn a trip to the Division 6 Super Bowl

▪ KIPP 34, Oxford 33: With the program’s first trip to the Super Bowl on the line, KIPP senior Juan Setalsingh delivered

Bring the shades and the earmuffs, it’s going to be cold and sunny this morning — 8:00 a.m.

After temperatures fell into the 20s in some parts of the state last night, Thanksgiving morning will bring blue sky and frozen ground. It’s one of those mornings where you’ll want your sunglasses and your winter coat. Don’t be fooled by the sunshine, make sure to bundle up.

Expect temperatures around 40 for those 10 a.m. kickoffs, with it warming up another 5 or so degrees by noon. Wind should be light and no precipitation is expected.

And be careful on the roads. The low sun angle this time of year slows down traffic even when weather is otherwise perfect. Some of the busier places of Route 128 as well as the Mass Pike can see a traffic jam just from the inability of people to feel comfortable driving in those places.