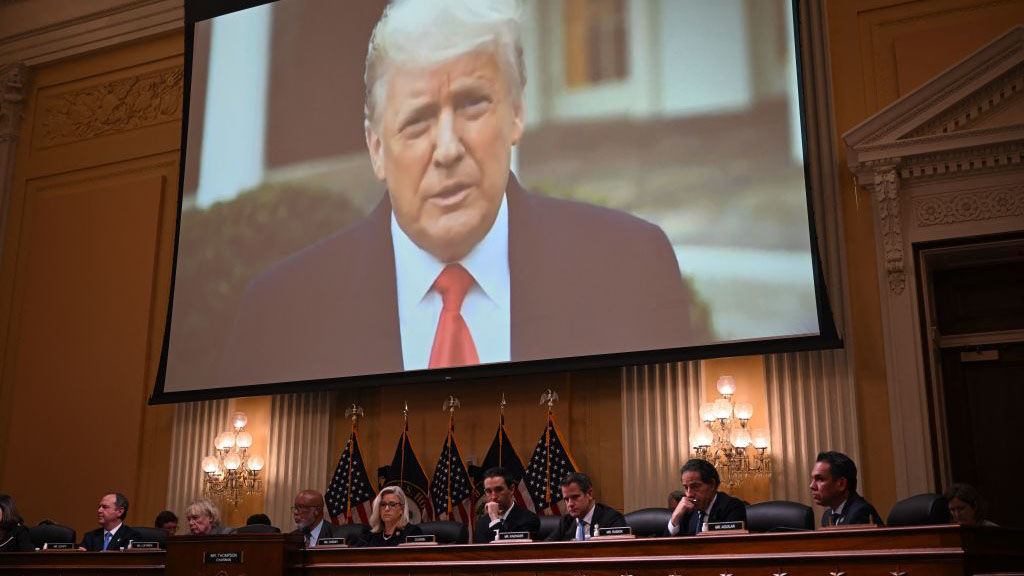 In the latest Jan. 6 hearing, already standing out for its notable moments, Rep. Liz Cheney saved the most startling for last.

In her closing remarks, the co-chair of the House investigating committee said the panel had learned that former President Donald Trump had recently tried to contact a witness whom “you have not yet seen in these hearings.”

The witness apparently recognized the caller ID, and did not answer the phone, instead contacting a lawyer, who then told the committee. The committee in turn referred the matter to the Justice Department.

The witness Trump is accused of trying to contact is a member of the White House support staff, a source familiar with the issue told NBC News on Wednesday.

CNN first reported that the witness works at the White House and was in a position to corroborate part of what Cassidy Hutchinson, an aide to former Trump chief of staff Mark Meadows, testified to under oath.

Though much remains uncertain about the call, including its purpose and the intended recipient, the way it was described Tuesday raised the prospect that Trump or someone close to him was hoping to shape witness testimony in the ongoing congressional hearings into the Jan. 6, 2021, assault on the U.S. Capitol.

While the committee has focused largely on compiling a historical record of the attack and Trump’s role in it, Cheney’s assertions about the former president’s phone call added another layer to the inquiry.

It was not the first time the committee has raised the possibility of witness tampering. Among its disclosures on that subject, last month the panel revealed that one witness had been contacted by someone it did not identify, reminding the person that they were perceived as “loyal” and would “do the right thing” at their deposition the next day.

House select committee vice chair Rep. Liz Cheney, R-Wyoming, disclosed Tuesday that committee members will be deciding how to move forward after reports of Trump allies attempting to sway witness testimony about the Jan. 6 riot at the U.S. Capitol.

The Justice Department declined to comment on Cheney’s disclosure, and it was not clear whether prosecutors who are tracking the hearings might follow up on the outreach to witnesses.

Even so, such contact is problematic given how easy it is for prosecutors to read nefarious intent into it, and can be illegal in instances when someone instructs a witness in any official proceeding to lie, to not cooperate or to otherwise hinder an investigation.

“From a legal perspective, I’m advising my client, ‘Don’t make a call, don’t tell someone to make a call, don’t do anything where there’s any appearance where you’re trying to influence a witness,’” said Michael Weinstein, a former Justice Department prosecutor and criminal defense attorney in New Jersey.

Witness tampering prosecutions are relatively rare and when pursued are hardly slam dunks, Weinstein said, with prosecutors and defense lawyers often diverging on the meaning and intent of particular language to a witness.

The federal statute even says that defendants charged with witness tampering can raise as an affirmative defense that their sole intention was to encourage or induce a witness to testify truthfully.

“It’s a very difficult case because unless someone is explicit — i.e. ‘Don’t Testify. If you testify, I’m going to kill you’ — there are a lot of nuances,” Weinstein said.

Instances cited by the Jan. 6 committee would appear to involve nuance. In one, a witness said they were told that “as long as I continue to be a team player, they know I’m on the right team. I’m doing the right thing. I’m protecting who I need to protect, you know, I’ll continue to stay in good graces in Trump World.”

The witness was reminded that Trump does read transcripts.

Another message described by the committee involved a witness who was contacted by a person purporting to pass along a message from someone “who wants me to let you know he’s thinking about you. He knows you’re loyal and you’re going to do the right thing when you go in for your deposition.”

None of the people were identified by the committee, but some media reports identified the person who got such a message as Hutchinson.

The principal statute governing witness tampering applies to federal proceedings, whether congressional, executive or judicial, and prosecutors must generally establish that the offender knowingly sought to influence, delay or prevent a witness’s testimony. A separate statute makes it a crime to intentionally obstruct a pending congressional proceeding.

That witnesses have described being contacted, or that Trump is said to have a keen interest in testimony or cooperation that could be damaging to him, is perhaps not surprising. Special counsel Robert Mueller’s Russia investigation documented numerous instances in which Trump or his associates made contact with people they feared could harm them.

Longtime Trump confidant Roger Stone was indicted, then convicted, of witness tampering charges that accused him of urging a witness in a congressional investigation to do a “Frank Pentangeli” — a reference to a character in “The Godfather: Part II” who lies to lawmakers. Trump’s campaign chairman, Paul Manafort, also faced accusations that he sought to tamper with witness testimony.

In addition, Mueller’s report cites an account from Trump’s former personal lawyer, Michael Cohen, that Trump called him a few days after the FBI served search warrants on Cohen and told the attorney to “hang in there” and to “stay strong.” Friends of Trump told Cohen that the president loved him and had his back.

At the time, Trump’s business, the Trump Organization, was paying Cohen’s legal fees, but Cohen has said that stopped after he began discussing with family and friends that he was considering cooperating with Mueller’s investigation.

The Jan. 6 committee is also exploring payments and fees from Trump that have gone to people who have been asked to appear before the panel.

Trump’s sprawling fundraising operation paid at least $4.8 million for “legal expenses” to more than 30 different firms between February 2021 and May of this year, campaign finance disclosures show.

That includes a $50,000 payment to a law firm where one of Steve Bannon’s lawyers is a partner. Bannon, a former White House strategist and Trump ally, is facing trial next week on charges of defying the Jan. 6 committee’s subpoena. His lawyer, M. Evan Corcoran, did not return an email seeking comment.

Separately, the committee has noted that Trump’s political action committee has made a $1 million charitable contribution to a foundation, the Conservative Partnership Institute, where Meadows is a senior partner. That contribution was made in July 2021, months before Meadows had halted his cooperation with the committee. A lawyer for Meadows declined to comment Wednesday.

The money was referenced last month by a committee investigator who alleged that large sums Trump raised from supporters to advance the lie that the election was stolen went to his PAC.

But proving that the payment to Meadows’ foundation was in any way improper or meant to influence his testimony would be a significant challenge, said Steven Lubet, a Northwestern University law professor.

“You’d have to prove it’s a corrupt motive and you’d have to prove that the intention is to hinder, delay, prevent or influence the testimony,” Lubet said. “And transferring the money doesn’t establish any of those requirements, so there’d have to be some additional proof that those things have happened.”