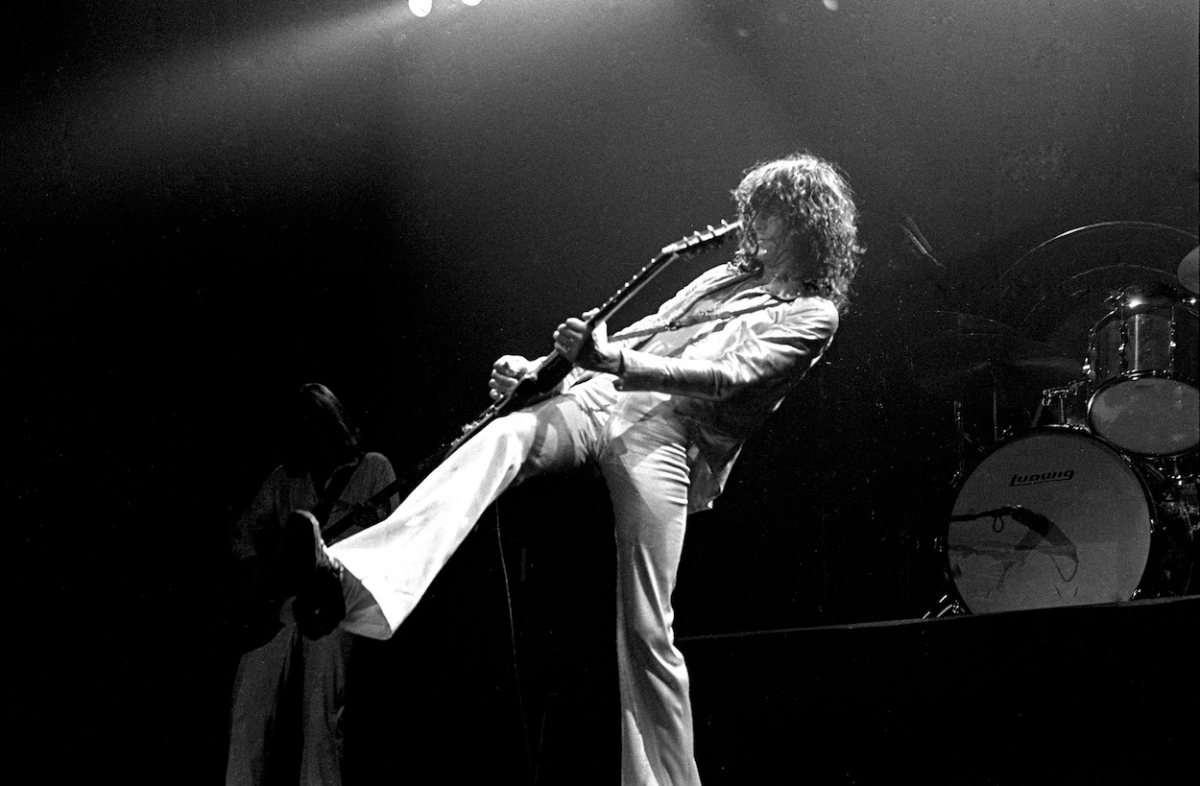 Led Zeppelin earned a reputation as one of the heaviest bands of their era. However, they also hopped between genres with ease and frequency. Zep incorporated traditional folk, Middle Eastern tones, symphonic elements, and genre exercises so effortlessly that it’s easy to understand why they bristled at earning a heavy metal label with their music. Led Zeppelin guitarist Jimmy Page said one riff took listeners out of their comfort zone, and we can hear his point.

“Dancing Days” sits right in the middle of Houses of the Holy. Tucked between the fleet-footed James Brown salute “The Crunge” and the reggae-riffed “D’yer Mak’er,” it might be the breeziest song on the album. And that might have been by choice.

After the rousing success of Led Zeppelin IV, the band never intended to try and recapture the magic of that album’s creation. Zep shifted gears dramatically to keep their momentum and avoid treading the same ground again. They didn’t want to become staid.

“Dancing Days” is indicative of that. It’s one of the shortest songs on Houses of the Holy, and Robert Plant’s lyrics about boozing the night away with a female companion are light-hearted, but Page’s riff is the opposite.

“You’re not in a comfort zone when you are listening to the opening riff of ‘Dancing Days,’” Page once said, per Centennial Media’s Legends of Music Spotlight: Led Zeppelin. “But I think it feels natural, in a dark way.”

We can hear what Page means about his “Dancing Days” riff.

If “Dancing Days” is supposed to be as light-hearted as Plant’s lyrics, no one bothered to tell Page.

His opening riff, which glides between two notes, is so simple that the listener quickly becomes familiar with the pattern. Then just as quickly, Page drops in a different sliding two-note couplet that sounds almost sinister. If Page’s guitar riff could be personified, the opening almost sounds like someone about to lose their footing as they’re about to step down off the front porch.

Page’s riff is off kilter for much of “Dancing Days.” He adds a barely-perceptible descending fill behind the main guitar line. When Plant sings about sippin’ booze, Page moves up the fretboard and adds a stair-stepping element to his riff. When he plays the next bar, his guitar line slowly slides backward.

If it wasn’t evident that Page’s riff on “Dancing Days” is meant to take listeners out of their comfort zone, the ending cinches it. His mini solo around the three-minute mark transitions back to the opening riff, played a little off-kilter in a higher register.

RELATED: Led Zeppelin Answered Its ‘Houses of the Holy’ Critics in Explosive Fashion

Houses of the Holy needed only two weeks to earn gold certification from the Recording Industry Association of America upon its release in 1973. The album earned diamond status (10 million or more units sold) in 1999.

“Dancing Days” has a good length for a single, but Led Zeppelin never released it as one. However, two Houses of the Holy songs spent a combined 24 weeks on the Billboard singles charts. “D’yer Mak’er” was Zep’s most successful single in terms of chart longevity; it spent 16 weeks on the hot 100 and peaked at No. 20. “Over the Hills and Far Away” peaked at No 51 during its eight-week chart run.

We don’t know if Led Zeppelin considered releasing “Dancing Days” as a single, but it seems unlikely. Jimmy Page’s woozy riff might have been too outside the comfort zone for American audiences.