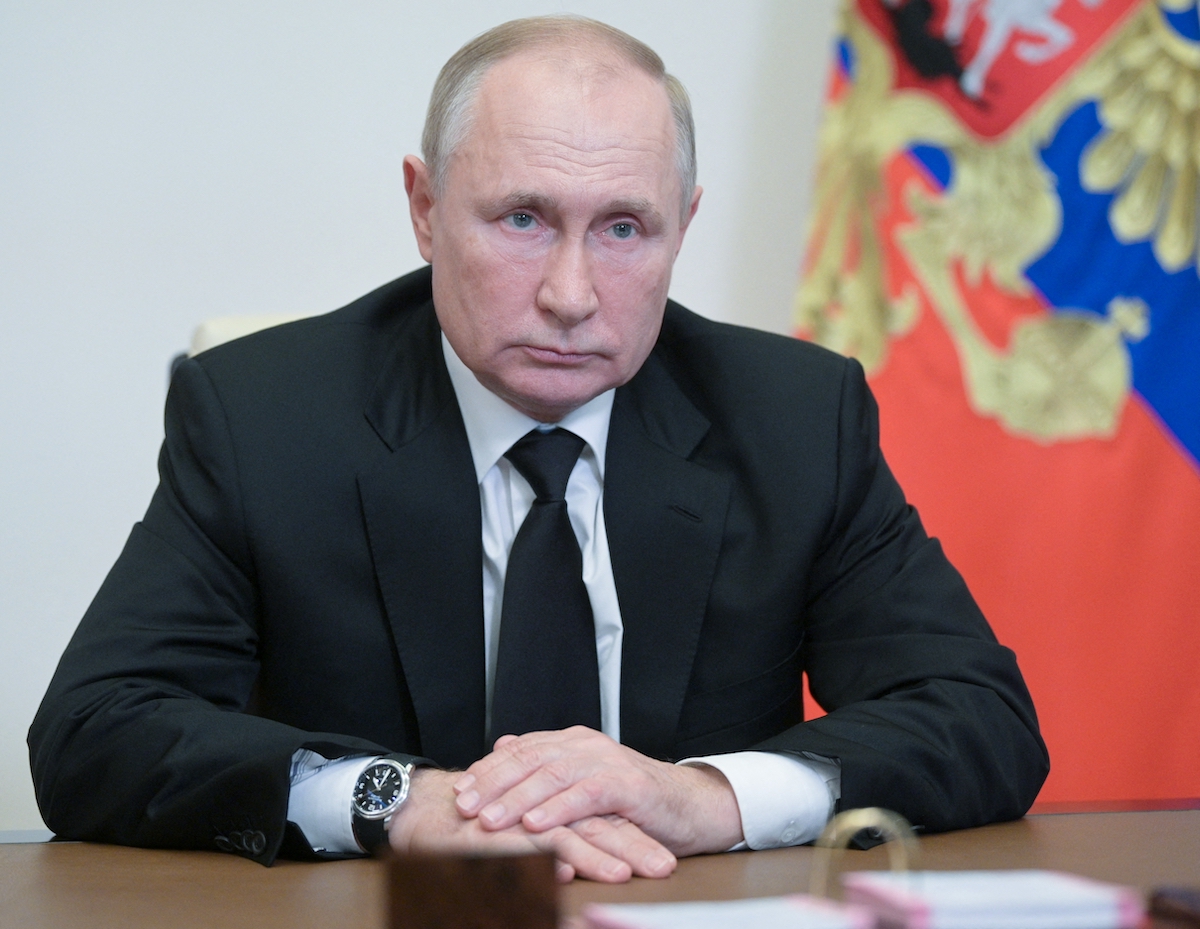 Immediately after the Russian invasion of Ukraine in February this year, the US, the UK and the European Union placed major sanctions on Russia to constrict its economy and restrain its war effort. Having been updated several times since, these sanctions have compounded the effects of the previous sanctions placed on Russia in 2014 after it annexed Crimea.

The Russian “economy contracted for the second quarter in a row,” according to a November 16 article in the Financial Times, which attributed this downturn to the Western sanctions. Undermining the sanctions through a variety of methods, including cooperating with other countries with experience evading sanctions, has become an even greater priority for the Kremlin.

Russia has decades of history in helping other countries evade sanctions. In recent years, Russia has exported oil to North Korea and employed its laborers in Siberia in violation of international sanctions, while Russian entities have also been sanctioned for aiding North Korea’s weapons programs.

The Kremlin is now calling in its own favors. Weeks after North Korea and Russia pledged “to strengthen ties” in August, North Korea is believed to have supplied Russia with millions of rockets and artillery shells, undermining Western attempts to isolate the Russian military-industrial complex.

Iran has faced heavy Western sanctions since 1979, aimed at restricting its economy and curbing its weapons programs. Last month, Iran was suspected of asking Russia for aid with nuclear energy materials, which could significantly shorten the “breakout time” needed to create a nuclear weapon.

Russia will likely acquiesce, having received significant drone and missile shipments from Iran since September. With the “price cap on Russian seaborne oil” coming into effect from December 5 (and the ban on most petroleum products expected to take place by February 5, 2023), Iran’s assistance in evading oil sanctions will be greatly appreciated in Moscow.

Iranian oil exports, for example, plummeted by 90% after the reintroduction of sanctions after former US president Donald Trump’s administration pulled out from the Iran nuclear deal, the Joint Comprehensive Plan of Action, in 2018. However, a mix of tactics has allowed Iranian oil exports to rebound in the years since.

Oil giant Shell faced criticism in April for undermining sanctions by purchasing “Latvian blend” oil, almost half of which (49%) originated from Russia. The UK has also received hundreds of millions of dollars‘ worth of Russian oil since its invasion of Ukraine, even as some of this oil “was registered as imports from Germany, Belgium, and the Netherlands.”

Russian and Iranian officials have also discussed using Iran as a “back door” to allow Russian oil products to enter global markets, which will become easier should a renewed nuclear deal between Iran and Western states go through.

Russian entities have similarly shown effectiveness in getting sanctioned Venezuelan oil to global markets in recent years. After Russian oil giant Rosneft was sanctioned in 2020 for doing so, the Kremlin quickly created a new oil company, Roszarubezhneft, to continue operations after Rosneft left Venezuela.

With Russian assistance, Venezuela’s oil exports doubled from December 2020 to December 2021, finding many other facilitators and buyers in the global market. In 2021, the US Treasury sanctioned several European oil traders who were working with a Mexican network that was shipping Venezuelan oil to companies in China, Indonesia, and other countries in Southeast Asia.

Creating shell companies has also historically blunted the effectiveness of sanctions. Syrian officials have created countless shell companies to blur ownership of economic assets in recent years, and Iranian clearing houses and foreign-registered front companies have conducted tens of billions of dollars in sanctions-evading trade annually, according to Politico.

Western banks, such as Germany’s Commerzbank AG and Deutsche Bank AG, and the United States’ Citigroup, often unknowingly, helped Iran conduct underground export transactions and may face Russian attempts to use these banks to facilitate similar transactions – “either wittingly or unwittingly.”

Russian oligarchs also have plenty of connections to Western financial actors and the ability to expand their economic empires in other countries.

Nonetheless, the ambitious Russian-oil price cap that was introduced on Monday has worried some in Moscow as “about 95% of the world’s tanker liability coverage is arranged through a City of London-based insurance organization called the International Group of Protection and Indemnity Clubs.”

Russia will struggle to export large volumes of oil without the insurance coverage required to secure its transport options, and Western officials hope Moscow will accept shipping oil at a reduced price rather than find other alternatives.

Lifelines, however, exist for the Kremlin. Former Russian president Dmitry Medvedev stated in June that the Russian government would “replace commercial insurance and reinsurance cover of oil exports by sea and the vessels that carry them in a bid to counter the European Union ban on companies providing services.”

This would be similar to the measures the Japanese government took in 2012 when it provided “a sovereign guarantee of up to $7.6 billion in liability for a tanker carrying Iranian oil” to maintain trade with the country.

Additionally, “There are probably insurers in Russia capable of writing third-party liability and reinsurance programs that could then be backed by a sovereign fund from China or Russia,” according to Mike Salthouse, chairman of the International Group’s sanctions subcommittee.

Indian companies also agreed to certify Russian tankers in June, raising suggestions of “a non-Western fleet with sovereign Russian or Chinese insurance and financing, and Indian certifications for the vessels.” Shipping companies and maritime services based in India, China, and the Persian Gulf would be essential for Russia to achieve this.

Russia is also using former Soviet states to bypass sanctions. In May, Ukraine accused Georgia, Armenia and Azerbaijan of helping Russia re-export its products to international markets after more than 200 companies were established and tens of thousands of Russians settled in these countries in the months after the February invasion.

Smuggling routes through Central Asia have historically facilitated the northern drug trade route to Europe. But these routes have also allowed Central Asian states to emerge as integral entry points for Western technology sought by Russia in recent months, including microcircuits and semiconductors.

Five Russian nationals were charged with sanctions evasion in October for shipping military technologies, including semiconductors, radars, satellites, and other equipment, from US manufacturers to Russia. Tens of millions of dollars were spent to supply US-origin technologies for use in Russian fighter aircraft, missile systems, smart munitions, and other systems.

The deals were facilitated through a mix of real and fake companies and falsified documents, while cryptocurrencies were used for the transactions and to launder the proceeds afterward.

Three Latvian and Ukrainian nationals were also charged in October for attempting to ship US technology for use in Russia’s nuclear and defense industries, in violation of US export controls. Though unsuccessful, the brazenness of Russian networks attempting to penetrate the US points to greater success in other countries with higher bribery rates and laxer inspection policies.

Isolating Russia will also require the assistance of other major economic centers. But China has received resources from Iran, Venezuela and North Korea in recent years in violation of US sanctions, and is already pursuing the same policies with Russia. Small refiners in China are able to ignore the risk of US penalties since they are “hard to reach with sanctions,” according to Anders Corr, founder of Corr Analytics.

Beijing will also look to use Russia’s isolation to increase Eurasian trade through its Belt and Road Initiative, as well as use other economic mechanisms to undermine traditional US dominance. After Russian banks were blacklisted from the Society for Worldwide Interbank Financial Telecommunication (SWIFT) payment-verification system, China and Russia have taken greater steps to develop their own alternatives.

In July, India set up a framework to conduct international trade in rupees. Vostro accounts required to facilitate this trade have been opened by Russia’s Gazprombank (with India’s UCO Bank), VTB Bank, and Sberbank, with six more Russian banks in talks to do so.

A major gas-pipeline deal with Pakistan, an agreement to use local currencies in trade with Egypt, and increased energy exports to Brazil in recent months have further demonstrated Russia’s attempts to diversify its economic options.

Russia’s economy will continue to face significant hurdles, particularly with the imposition of the oil price cap. While US officials have stated that the aim of sanctions is to change Moscow’s behavior, Russia and other countries may double down on developing rival official trade mechanisms to the West and expanding a globalized black market with other rogue states.

This article was produced by Globetrotter, which provided it to Asia Times.