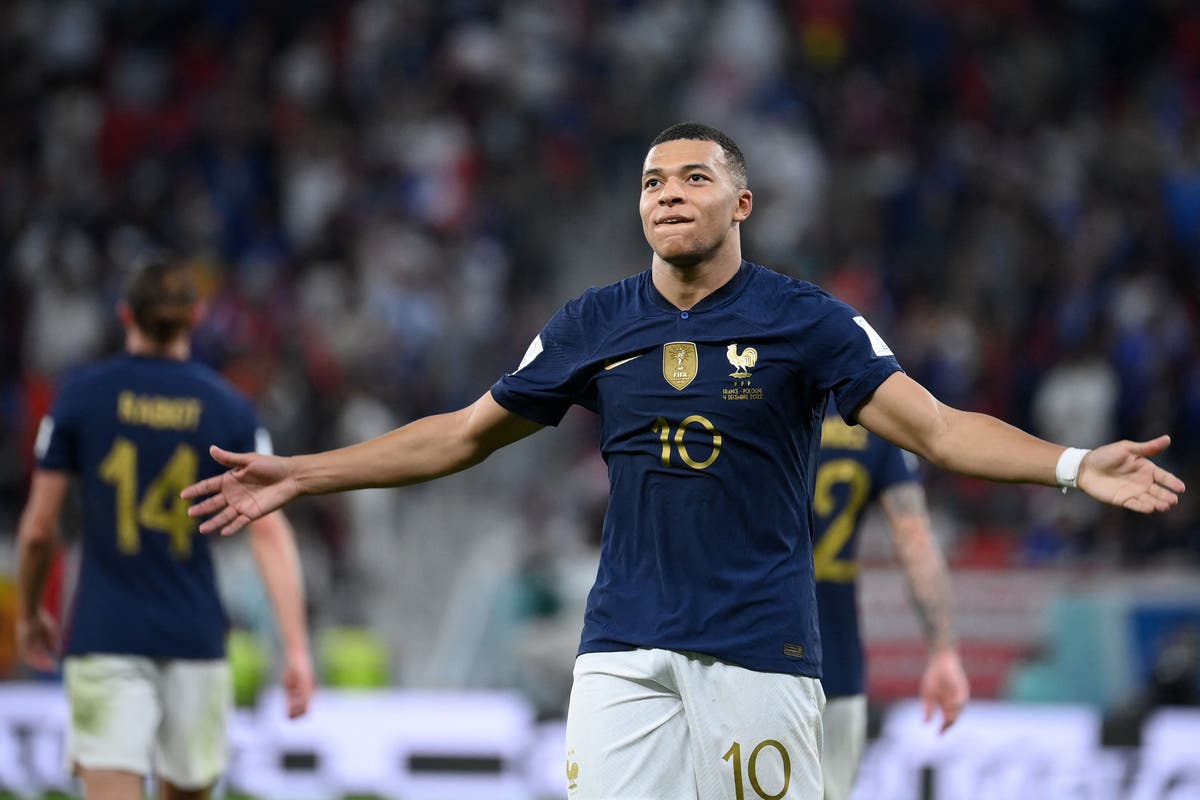 The temptation is to advise Olivier Giroud to enjoy his record. The killjoys and the realists alike could argue he is unlikely to have it for long. Even as he overhauled Thierry Henry to become the most prolific man in the history of the French national team, a threat to his status is accelerating towards him at devastating speed.

The score stands at Giroud 52, Kylian Mbappe 33. The gap could close rapidly. Mbappe does everything quickly and he has chased down more garlanded figures than Giroud. His first goal against Poland took him level with Cristiano Ronaldo on eight in World Cups, his second alongside Lionel Messi on nine. Each is almost certainly in his last World Cup. Mbappe could have three more.

He has emerged as the likely challenger to Miroslav Klose, the 16-goal leading marksman in the competition’s history. Yet Mbappe does not just play the numbers game; not when his defining quality is the pace that makes him viscerally exciting to watch. He is like Henry in overdrive, and not merely because of a fondness for the inside-left channel and a capacity to curl shots into the far corner.

But if he is the nemesis of Messi and Ronaldo, he is their antithesis in another respect. Famously, neither is a World Cup winner. Mbappe was one while still a teenager. “This is the competition of dreams,” he said, but they can only dream of triumphing in it. They are defined more by the Champions League. Mbappe is yet to win that; perhaps staying at Paris Saint-Germain, lucrative as it is, reduces his chances.

Which may leave Mbappe, ultra-modern figure as he is, as something of a throwback. He wished Pele well on social media when the Brazilian was admitted to hospital and in the age before Ronaldo and Messi, the men invariably described as the two greatest ever claimed such distinctions because of the World Cup. The club game had yet to overpower its international counterpart when Pele and Diego Maradona played.

Individuals assumed a greater role in conquering the footballing world then whereas the Italy, Spain and Germany wins in 2006, 2010 and 2014 felt like triumphs of teams, packed with very good or great players but possessing none of the 10 best ever. Instead, the collective prevailed.

Perhaps the gameplan can be simple: give it to the roadrunner. As Didier Deschamps said: “Kylian Mbappe has an ability to solve problems… so much the better for us. Kylian can change a match in a moment. He is always playing with such joy. We want to share those smiles. France needed a great Kylian Mbappe performance tonight and they got one.”

An assist came from a perceptive pass, the defenders sucked towards Mbappe because he is Mbappe. Two shots were taken with prodigious composure; the second was particularly Henry-esque. The smiles may belong to him, but joy probably isn’t the emotion experienced by some luckless right-backs. Sadly for them, Mbappe is also playing notably wide; there is more space on the flanks, more scope for the least fair of races when, with effortless ease, he turns the afterburners on.

It makes those five goals are all the more notable: for much of the time, Mbappe has been operating as a touchline-hugging winger, not a penalty-box poacher. He won the World Cup in 2018 cutting in from the right. He is trying to defend it from the left. And had Karim Benzema been fit, he might have been one of twin, if slightly wide, strikers.

In a way, he may have started off as officially the inferior of the pair. After all, Benzema is the reigning Ballon d’Or winner. Maybe PSG’s hubristic inability to win the Champions League has denied Mbappe the individual honours. Certainly Ligue Un’s relatively low profile certainly hampers his cause; he is the leading man who stars in off-Broadway productions. Some of the football-watching world see Mbappe largely in the Champions League, often amid Paris Saint-Germain’s underachievement, and major international tournaments. It gives him an anachronistic feel, the superstar who has been glimpsed less often on club duty.

Now he could become the youngest two-time World Cup winner since Pele; like the Brazilian, he scored in the final as a teenager. The eventual verdict may be that he has dominated a campaign, as Maradona did in 1986, but few others. And with every game in Qatar, the case to anoint Mbappe the world’s best player seems stronger. After the duopoly of Messi and Ronaldo proved themselves in the Champions League, he is taking the old-fashioned path to claiming that title: because of the World Cup.