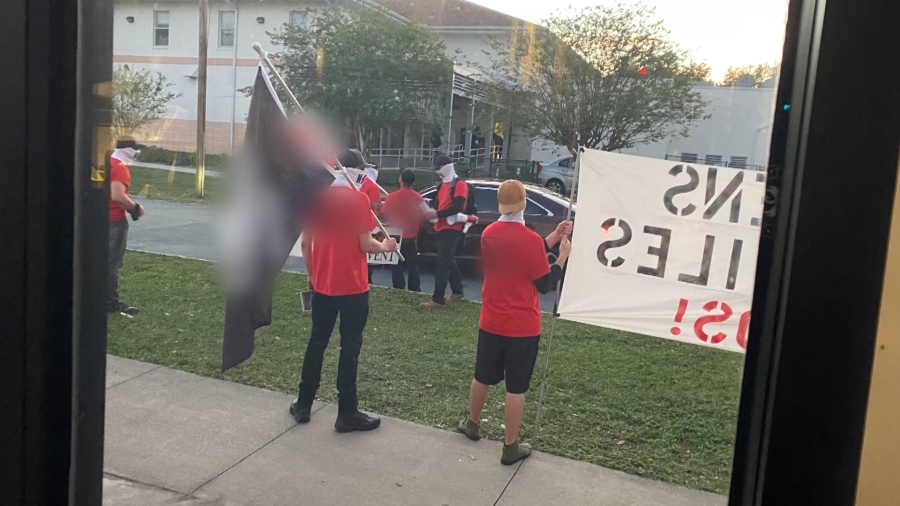 Jason DeShazo was getting ready.

“One of our volunteers rushed in and said the police officers are out there. There are Nazi protestors out there. My first response was like – ‘what?’” he said.

DeShazo was hosting a charity event for The Rose Dynasty Foundation, his own nonprofit organization, and CampOut, a camp for LGBTQ+ youth.

The “Celebration of the Arts” event involved drag performances, including DeShazo as “Momma Ashley Rose.”

Drag shows have become a target for members of the far-right, leading to protests and threats around the nation.

“If you look at our climate in the world, I knew it was gonna happen sooner or later but I had no idea that was happening Saturday night,” said DeShazo.

The dozen or so protesters wore masks and held signs with Neo-Nazi symbols on them.

They projected anti-LGBTQ messages on the building.

“They’re filming our minors walking in, calling everybody pedophiles. It was a little scary. We had some people that were shook up,” said DeShazo.

DeShazo is satisfied with how Lakeland Police responded to the incident, saying officers stayed at the scene while protesters were there and checked in on the people inside.

According to DeShazo, there were 70 people inside, and at least 10 were children.

“I think they did well at being neutral but also making sure we were safe and they came in several times to check on me and check on our people. So I’m happy with the way they responded,” said DeShazo.

According to Lakeland Police public information officer Robin Tillett, a protester told officers they had traveled to Lakeland from out of town.

It is unknown with which group they are associated.

“Officers advised the representative of the rules outlined in the Florida state statutes and municipal ordinances, with which the group complied,” said Tillett.

The president of Polk Pride, Scott Guira, said he is disappointed but not surprised this national trend came to Lakeland.

“We’ve all heard the hate speech coming from around the country that really is zeroing in on drag performers, LGBTQ people and now very specifically drag performers,” he said.

Republican U.S. Rep. Scott Franklin, who represents Lakeland in Congress, said he was thankful the “malcontents” were not locals.

“Our Constitutionally protected right to free speech doesn’t shield people from parading their stupidity. But as Rush Limbaugh said, ‘The First Amendment doesn’t give anybody the right to be heard. People don’t have to listen to you.’ The more oxygen we give to haters, the more we fan their flames,” said Rep. Franklin in a statement.

DeShazo says he has received threats but vows to continue doing his work.

The mission of his nonprofit organization is to ensure every person feels “loved, accepted and wanted.”

“I’m not going anywhere. I’m not. We’re gonna continue to do what we do and I’m gonna continue providing that safe space for me wherever I can,” he said.