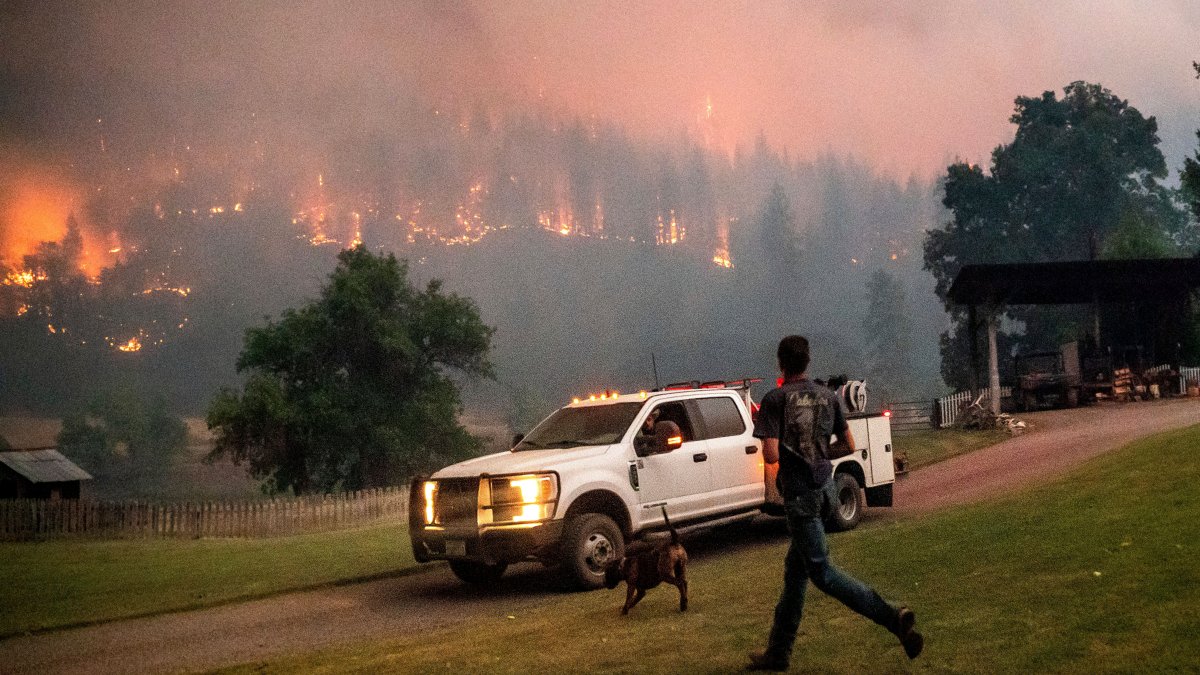 Crews battling the largest wildfire so far this year in California braced for thunderstorms and hot, windy conditions that created the potential for additional fire growth Sunday as they sought to protect remote communities.

“The fuel beds are so dry and they can just erupt from that lightning,” Freeman said. “These thunder cells come with gusty erratic winds that can blow fire in every direction.”

The blaze exploded in size to more than 80 square miles (207 square km) just two days after erupting in a largely unpopulated area of Siskiyou County, according to a Sunday incident report. The cause was under investigation.

The blaze torched trees along California Highway 96, and the scorched remains of a pickup truck sat in a lane of the highway. Thick smoke covered the area and flames burned through hillsides in sight of homes.

A second, smaller fire just to the west that was sparked by dry lightning Saturday threatened the tiny town of Seiad, Freeman said. About 400 structures were under threat from the two California fires. Authorities have not confirmed the extent of the damage yet, saying assessments would begin when it was safe to reach the area.

A third fire, which was on the southwest end of the McKinney blaze, prompted evacuation orders for around 500 homes Sunday, said Courtney Kreider, a spokesperson with the Siskiyou County Sheriff’s Office. The office said crews had been on the scene of the fire since late Saturday but that the fire Sunday morning “became active and escaped its containment line.”

Several people in the sheriff’s office have been affected by evacuation orders due to the fires “and they’re still showing up to work so, (a) very dedicated crew,” she said. A deputy lost his childhood home to fire on Friday, she said.

As the McKinney fire threatened, some residents chose to stay behind while others heeded orders to leave.

Larry Castle and his wife, Nancy, were among about 2,000 residents of the Yreka area under evacuation orders. They left Saturday with some of their prized possessions, including Larry’s motorcycle, and took their dogs to stay with their daughter near Mount Shasta.

Larry Castle said he wasn’t taking any chances after seeing the explosive growth of major fires in recent years.

“You look back at the Paradise fire and the Santa Rosa fire and you realize this stuff is very, very serious,” he told the Sacramento Bee.

In northwest Montana, a fire sparked in grasslands near the town of Elmo had grown to about 17 square miles (44 square km) after advancing into forest. Crews were working along edges of the fire Sunday, and aircraft were expected to continue to make water and retardant drops to help slow the fire’s advance, said Sara Rouse, a spokesperson with the interagency team assigned to the fire. High temperatures and erratic winds were expected, she said.

A section of Highway 28 between Hot Springs and Elmo that had been closed was reopened with drivers asked to watch for fire and emergency personnel. Visibility in the area was poor, Rouse said.

In Idaho, the Moose Fire in the Salmon-Challis National Forest has burned on more than 75 square miles (196 square km) in timbered land near the town of Salmon. It was 21% contained by Sunday morning. Pila Malolo, planning operations section chief on the fire, said in a Facebook video update that hot, dry conditions were expected to persist Sunday. Officials said they expected fire growth in steep, rugged country on the fire’s south side.

California law enforcement knocked on doors in the towns of Yreka and Fort Jones to urge residents to get out and safely evacuate their livestock onto trailers. Automated calls were being sent to land phone lines as well because there were areas without cell phone service.

Scientists say climate change has made the West warmer and drier in the past 30 years and will continue to make weather more extreme and wildfires more frequent and destructive.

The Pacific Coast Trail Association urged hikers to get to the nearest town while the U.S. Forest Service closed a 110-mile (177-km) section of the trail from the Etna Summit to the Mt. Ashland Campground in southern Oregon.

In Hawaii, the Maui County Emergency Management Agency said a brush fire was 90% contained but a red flag warning was in effect for much of Sunday.

And in north Texas, firefighters continued in their effort to contain the 2-week-old, 10 1/2-square-mile (27 1/3-square-kilometer) Chalk Mountain Fire. The crews now report 83% containment of the fire that has destroyed 16 homes and damaged five others about 50 miles (80 kilometers) southwest of Fort Worth. No injuries have been reported.

Across the country, more than two-thirds of the homes and businesses destroyed by wildfires are in the “wildland urban interface,” or WUI, a transitional zone between developed areas and wilderness. LX News climate storyteller Chase Cain explains why the area is more hazardous and how to see if your home is one of the 72 million facing some level of fire risk.