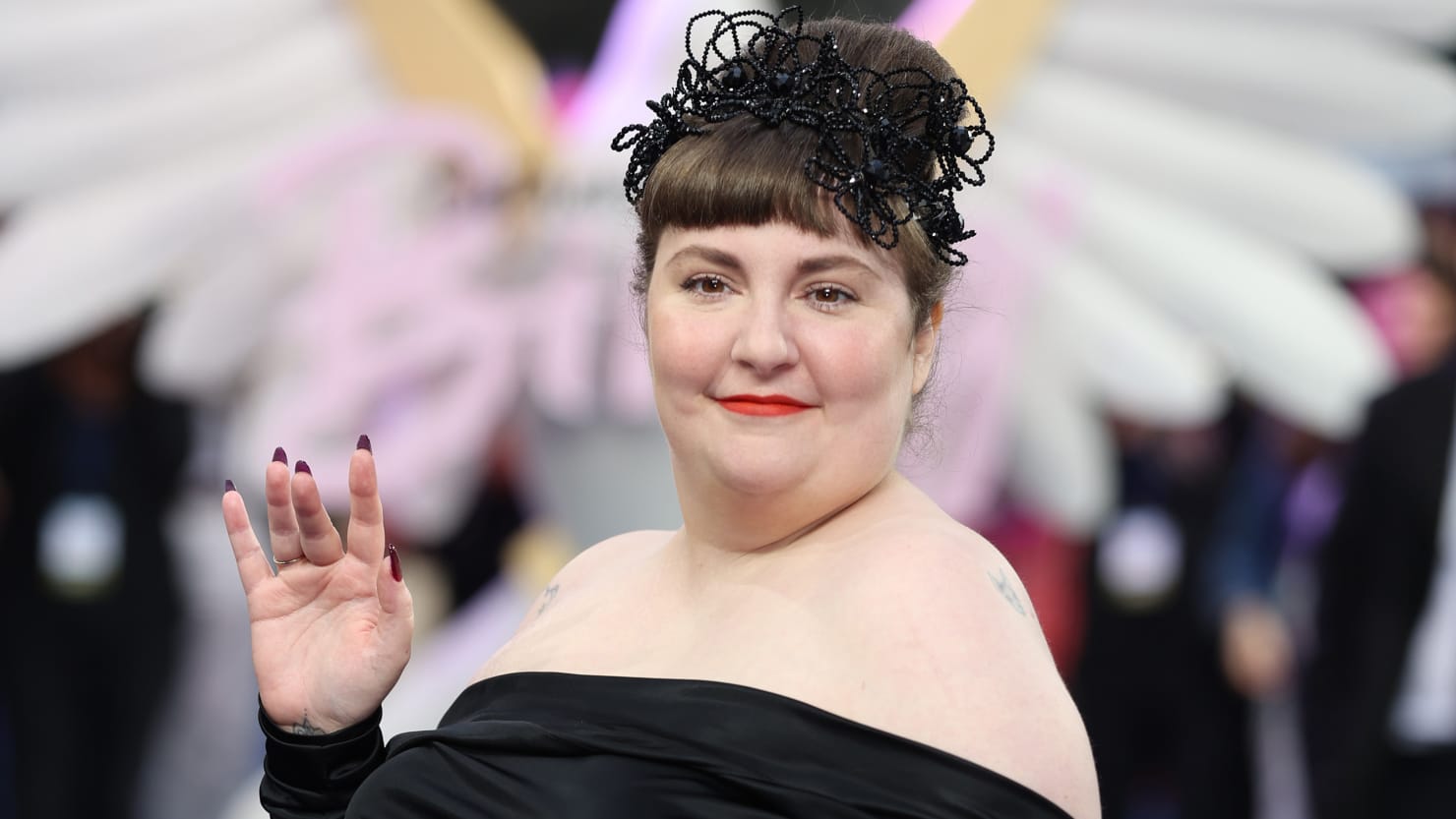 Lena Dunham is known for three things: her film and television creative output, particularly the breakout HBO series Girls; her wealthy white feminist gaffes overflowing with ignorant self-important nonsense; and her stream of apologies for said gaffes that set the scene for when she inevitably shows she’s learned absolutely nothing—as she did Sunday.

“When I go, I want my casket to be driven through the NYC pride parade with a plaque that reads ‘she wasn’t for everyone, but she *was* for us,’” Dunham tweeted, unironically. “Who can arrange?”

Nary a month after lamenting in The Guardian that “these things” will “be attached to [her] forever”—meaning the stuff that’s led Dunham to plead forgiveness from marginalized folks so many times that there’s a Twitter account that generates apologies on her behalf—Dunham wrote a tweet so tone-deaf that the word “cringe” doesn’t do it justice. Despite claiming that being a source of constant controversy and well-earned thinkpiece criticism was never “a job [she] wanted” and is now “a job that [she has] respectfully resigned from,” it seems that Dunham is on her bullshit again.

For starters, it’s mind-boggling that Dunham, totally unprompted, took to social media to declare herself an LGBTQ icon. Folks do not become queer icons via an application process or self-coronation, but it definitely was a bold effort. It’s also pretty stunning to see a rich, straight white lady issue directives for how she should be properly honored at a parade that was not made for her and needn’t be remade in her image.

This is a year when at least 240 anti-LGBTQ bills have been filed. Florida’s “Don’t Say Gay” legislation became law and copycat proposals are being written. Homophobic hate groups have collected unprecedented millions. An illegitimate, hyperpartisan Supreme Court conservative supermajority has signaled its willingness to undo marriage equality. Gender-affirming health care is under attack. Books about gender, sexality, patriarchy, anti-Black racism, and the intersections therein are being banned from schools and libraries. And an entire political party—along with its media and Very Online rearguard—are committing stochastic violence, arbitrarily labeling LGBTQ folks “groomers,” and trying to make non-cisgender, non-heterosexual existence illegal.

At a time when LGBT people, especially Black and other queer folks who have been doubly marginalized, likely feel like Pride is a celebration of just surviving this neo-fascist rise, maybe sit this one out, Lena.

Sure, Dunham produced an important documentary about a clothing company that caters to transgender men, has been supportive of her non-binary sibling, memoirist Cyrus Grace Dunham, during their journey, and received a 2014 Horizon award for her LGBTQ advocacy.

(During her acceptance speech, Dunham she joked that it was “a huge disappointment for me when I came of age and realised that I was sexually attracted to men.” That went over fine in that New York City event space but probably received less applause from LGBTQ kids in the closet because they know the safety found in straightness, but sure, yaaassss queen, I guess.)

Still, requesting that your basic LGBTQ advocacy be lauded with a literal goddam parade seems so incredibly self-centered that it makes your support seem self-serving. (Especially since it comes from someone who has been accused in the past of taking credit for other folks’ liberatory work, as when Tessa Thompson apparently felt the need to put out a statement noting that “Lena was not anywhere present in our group during the countless hours of work for the last two months” around the Time’s Up initiative.) Even a winking suggestion that LGBT folks make it all about you in this moment is not a good look.

I won’t rehash all of Dunham’s displays of gross and myopic white feminism, but this new tweet begs rehashing at least some of them. The place to start is probably with Girls, which from its 2012 debut launched a million think pieces about gender, race, class, and Dunham’s obliviousness about each. At the end of the first season, after a seemingly endless series of articles pointing out that Dunham’s show seemed to drop four entitled white girls into a Brooklyn scrubbed of any nonwhite folks, she told NPR’s Fresh Air she had avoided “tokenism in casting” and written a series “super-specific to my experience, and I always want to avoid rendering an experience I can’t speak to accurately.” What that essentially means is that the writer’s room (which was sometimes just Dunham, but not always) was overwhelmingly white. And while the show apparently couldn’t find a Black writer that fit during its first season, it did find a place for Lesley Arfin, a mentee of Vice’s Do’s and Don’ts-era Gavin McInnes. (Before she was hired on the show, Arfin once wrote that ““‘Nigger’ is a great word” because “the two g’s next to each other are like literal two G’s, broin’ out, tough as nails, them against the world.” Guess early aughts hipster racism was a job prerequisite.)

Less than a week after a mass shooting left six people dead at a Sikh temple in Oak Creek, Wisconsin, Dunham posted a pic of herself saying she’d “had a real goth/fundamentalist attitude when I woke up from my nap.” We’ve all been offline just as critical news was happening, so that might be understandable, but her conflating hijabs, fundamentalism, veils, and Islam (and throwing goth in the mix) led comedian Hari Kondabolu to note, “This tweet by Lena Dunham of ‘Girls’ makes it clear that SHE DOESN’T HAVE MUSLIM FRIENDS WHO WEAR VEILS.” Dunham may have apologized for that message, but she kept right on being unapologetically terrible on race.

Like when she accused Odell Beckham Jr. of not hitting on her at the 2016 Met Gala, an assessment filled with white-lady ideas about euro-centric beauty standards and how Black folks should respond to them. Dunham again apologized, but it was only a matter of time until the next public error.

It came in 2017, after The Wrap reported that actress Aurora Perrineau had filed a police report alleging Girls writer Murray Miller had raped her five years before, when she was 17 years old. In response, Dunham and Girls co-showrunner Jenni Konner issued a statement accusing Perrineau of lying.

“While our first instinct is to listen to every woman’s story, our insider knowledge of Murray’s situation makes us confident that sadly this accusation is one of the 3 percent of assault cases that are misreported every year,” the statement claimed.

In effect, Dunham helped turn a biracial black woman’s allegation of violent sexual abuse against an older white man into a story about herself. (Perrineau would later tell Glamour that the story had only been reported because she filed a police report. “It was never a thing like, ‘I’m going to tell my story.’ I just wanted justice.”)

Incredibly, Dunham had positioned herself as a vocal opponent of the idea that women fabricate sexual assault charges, tweeting, “Things women do lie about: what they ate for lunch. Things women don’t lie about: rape.” She had written a New York Times op-ed about pervasive sexual abuse of women by powerful men in Hollywood, saying the problem lay with men who refuse to speak up, not “the women who are afraid to come forward with their own stories.” After recounting her own story of sexual assault in her 2014 memoir, Dunham wrote about having her “character and credibility questioned at every turn” in a piece for BuzzFeed.

“I do not want our daughters born into a world that reacts to sexual violence against women in this way,” Dunham wrote. “This reaction, which ranges from skepticism to condemnation to threats of violence, is something I have been subject to as a woman in a position of extraordinary privilege. So let us then imagine the trauma experienced by low-income families, women of color, the trans community, survivors with disabilities, students on financial aid, sex workers, inmates, foster children, those who do not have my visibility, my access to medical and mental health care, or my financial and legal resources.”

But Dunham denied Perrineau this support just three years later. A day after publicly accusing her of lying, Dunham tweeted an apology, noting that she and Konner had been “given the gift of powerful voices and by speaking out we were putting our thumb on the scale and it was wrong.”

In December 2018, Dunham would pen an open letter again expressing contrition and acknowledging that she was, in fact, the liar, and that she had never possessed the “insider information” previously cited. (Dunham would later reportedly apologize to Perrineau, who had passed a polygraph test, in person.) Nonetheless, for a time, Perrineau was seen as an actor immersed in a scandal she hadn’t created and which threatened to overshadow her career.

Dunham’s tweet might seem like no big deal to some folks, but this is part of a pattern that—10 years on from when she first emerged in popular culture—keeps repeating itself. It’s neither the time nor the place for Dunham’s very on-brand occupation of a space that is not hers to fill. Should this latest gaffe be followed by an apology, Dunham’s effort to make amends will almost certainly be quickly overtaken by yet another statement that brings us right back to where we started from. Perhaps Dunham has a hole that can only be filled with attention, if it weren’t bottomless. Maybe she can’t see past her own ego. Maybe she views negative attention as just as good as any kind. In any case, it shouldn’t still be our problem.