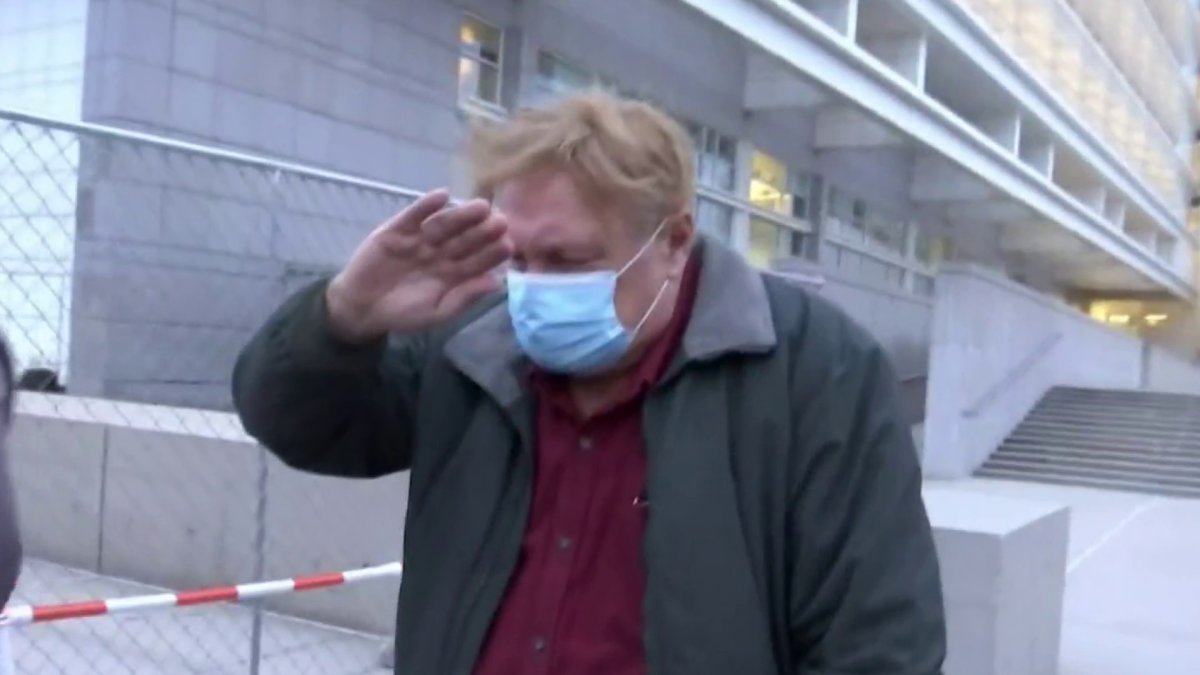 A Long Island man who was arrested allegedly threatening to launch a devastating attack at the New York City Pride march and repeatedly threatening LGBTQ leaders over the span of years — and then arrested again for stealing Pride flags from a town — pleaded guilty on Wednesday.

Robert Fehring admitted to sending anti-LGBTQ letters in the mail for more than a decade, in which he menaced and threatened to harm those supportive of LGBTQ causes and events in the area. He did not respond to questions as he left federal court in Central Islip.

The 74-year-old told the judge that he knew what he was doing was illegal.

Eileen Tyznar, of the Sayville Chamber of Commerce, said that she has felt threatened and scared for three years, receiving violent letters and notes threatening minorities as well as the LGBTQ community.

“He would call me evil for putting up these flags,” she said. “You can’t just go around threatening people because you don’t believe in certain views.”

Fehring allegedly stole more than 20 pride flags from the Suffolk County town of Sayville back in July, according to officials. Security video obtained by NBC New York appeared to show a man, wearing a weight belt, use a pole to pull one of the flags down.

The flags were later found in Fehring’s home, along with his two shotguns and rounds of ammo. Law enforcement also allegedly found two stun guns, an American flag-patterned machete, a DVD addressed to the home titled “Underground Build Your Own Silencer System” and a stamped envelope addressed to an attorney who has worked with LGBTQ groups. The envelope was found in a garage freezer, and inside the envelope were the remains of a dead bird, the criminal complaint stated.

As part of his plea deal, Fehring will have to give up his firearms. He will remain at home until sentencing — a fact that Tyznar was wary of.

“It’s scary that he’s still out. Today hopefully will be the start of him going away,” she said.

The annual NYC Pride march was the target of a potential attack planned out by Fehring, prosecutors have said previously, adding that he wrote that he intended to carry out an attack so devastating, that it would make the 2016 attack at the Pulse nightclub in Orlando “look like a cakewalk.”

The Bayport resident and former music teacher is also accused of mailing letters to leaders of the LGBTQ community in which he threatened to assault, shoot and bomb individuals, organizations and businesses associated with the community, according to the U.S. Attorney’s office.

A criminal complaint stated that Fehring had been sending threatening letters since at least 2013, oftentimes stating he would use firearms and explosives toward LGBTQ individuals or at associated events. Fehring allegedly sent at least 60 threatening letters in that time span.

One letter in particular threatened that there would be radio-controlled devices “places at numerous strategic places” at the 2021 New York City Price March, complete with enough “firepower” to make the shooting at the Pulse nightclub in Orlando that left 49 people dead more than 50 injured “look like a cakewalk.”

A June 2021 letter addressed to the CEO of an LGBTQ nonprofit in Sag Harbor threatened that they “better be ready to meet your end if you show up at Eisenhower on Sunday. It’s a great place to unload a high-powered rifle bullet from a distance, that can go right through your gay face.”

Fehring wrote another letter to the organizer of the Pride event in East Meadow, in which he called the individual a “FREAK” and said how he would be killed.

“They couldn’t get a shot off at you, slithering around the back stage area like a snake. Too many cops. Very disappointed. But your time has come,” the letter from Fehring read, according to prosecutors. “They are out to KILL you … and your boyfriend. You are being watched. No matter how long it takes, you will be taken out….high-powered bullet….bomb….knife….whatever it takes.”

Leaders of Long Island Pride, which produced the event in Eisenhower Park, say that for six years they have received similar kinds of threatening letters, and have lived in fear.

“I feared for my life when walking out of my house, which the guy lived only 15 minutes from me. I feared for those that walked into our community centers, or that came to Long Island Pride,” said LGBT Network President David Kilmnick, who also said Suffolk police initially dropped the ball when it came to going after Fehring for his alleged threats.

“There were times over the eight years it wasn’t being taken as seriously as it was and just being put to the side, saying ‘well, people who make these threats, they really don’t follow throughout on it.’ Really? How many shootings have we seen in schools and other places in our country over the years?” Kilmnick said.

Members of the FBI’s Civil Rights Squad and the New York Joint Terrorism Task Force searched Fehring’s home on Nov. 18, and found photos from the Pride event in East Meadow in June 2021, prosecutors said, signifying he was either present at the event or had someone take pictures for him.

A letter from Sept. 2021 was addressed to the owner of a Brooklyn barbershop and stated that the business “is the perfect target for a bombing” while threatening more violence, according to the criminal complaint.

Sentencing for Fehring has been scheduled for June. He faces up to five years in prison.

Brendan Fraser Through the Years

World Cup 2022: What to know about the first slate of quarterfinal matches

Why do Brazil dance as a celebration after scoring at the World Cup 2022?