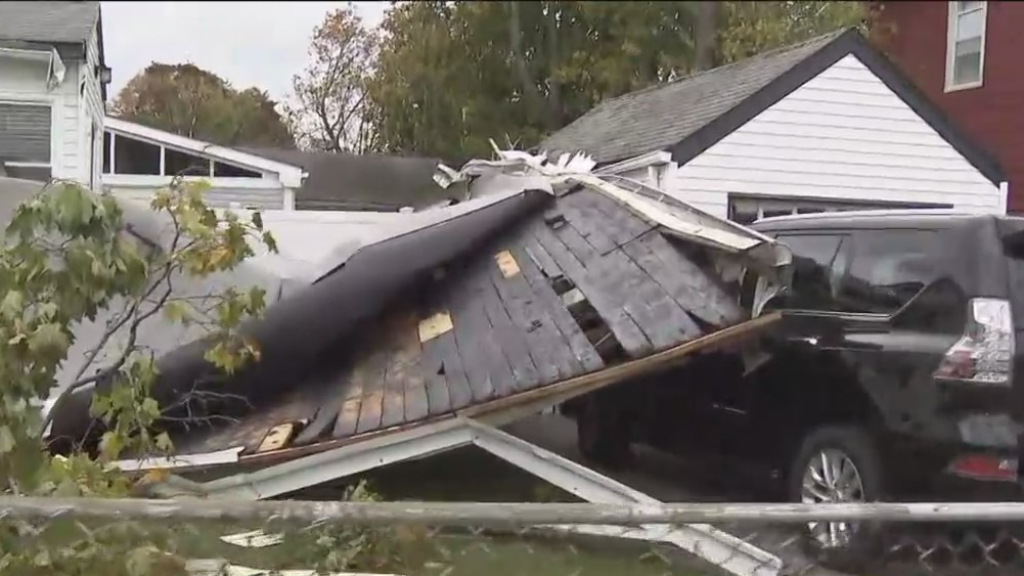 UNIONDALE, N.Y. (CBSNewYork) — People on parts of Long Island are cleaning up after multiple tornadoes touched down over the weekend.

The severe weather caused huge trees to topple onto homes and cars, leaving damage behind.

As CBS2’s Vanessa Murdock reported, the tornadoes began in Nassau County, where an EF0 twister put down winds of 85 miles per hour.

In Uniondale, a two-story colonial is now unfit for living after half the roof was ripped off and thrown onto a neighbor’s Lexus and garage.

This was the third Nassau County town hit by the EF0 twister.

The first touchdown happened at 2:37 p.m. in Woodmere. The twister hopped to Hempstead and then Uniondale. The final tornado touchdown was at 2:55 p.m. in Levittown, which saw the worst destruction.

“I yelled at my wife, ‘Get into the bathroom,’” one Levittown homeowner told CBS2.

“The only other place you can go is, let’s say, in the bathroom, in the tub, if that were the case. Other than that, no, just say a little prayer and we’ll go from there,” neighbor Ed Warch said.

A home under construction was severed in half by a fallen tree.

“It’s a huge tree. The amount of damage it did, you can see, it’s off the slab, it’s crazy. This house has to be completely taken down and started over,” one resident said.

An SUV was crushed under the weight of another tree. In a moment, cement slabs from the sidewalk went from being flush with the earth to rising taller than an average human.

On Cornflower Road, neighbors quickly called 911 to help a neighbor trapped in her living room.

“The fire department came, the police came, and they were just able to get her out in a wheelchair right out the front door,” said one neighbor.

There were endless downed limbs, busted fences, and some busted windows too.

Tornadoes happen on Long Island. From 1950 to 2020, eight touched down in Nassau County and 28 in Suffolk County. Over the same 70-year period, five EF2s with winds up to 135 miles per hour raked the island.

So how rare is a November outbreak? The latest touchdown on the island happened October 29, 2018, and the latest in New York State on November 16, 1989.