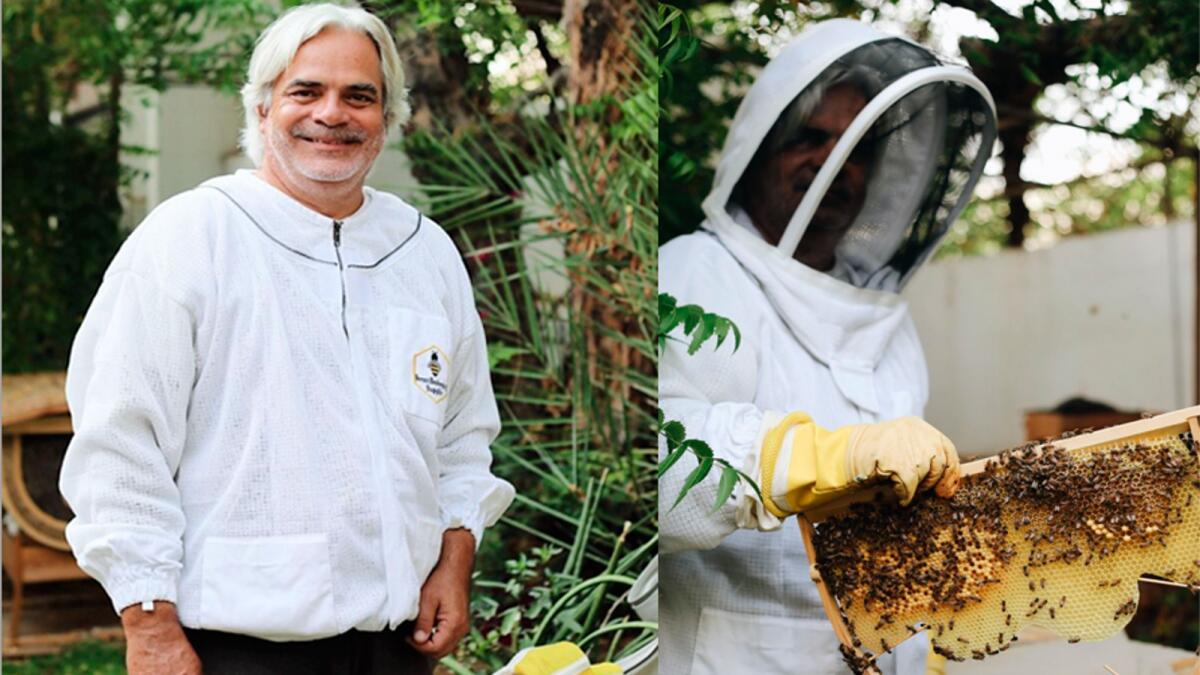 For 30 years, Olivier Cantagrel, founder of Oliver’s Bee Farm wore a suit to work. In the corporate world he held many positions including senior ones too such as Chief Financial Officer and Chief Operating Officer. Today, he wears a different suit to work — a beekeeping suit. Olivier is now a beekeeper with a thriving dedicated business.

The change in his line of work happened due to his curiosity. “A few years ago, I moved to a new house and saw my neighbour wearing a beekeeping gear. I waved and he waved back,” he said.

Following this simple social exchange, Olivier and his neighbour Hussein started to talk about his passion for beekeeping. “I was curious to learn more about what he did, and he shared his knowledge about the particularities of beekeeping in the UAE and he invited me to help him.”

The rest is history. He and Hussein (his business partner), now produce and sell honey which is made via natural apiculture, which does not involve chemical treatment. “If you want to make sure your honey is 100 per cent natural, get your own hive and learn about beekeeping, or buy your honey from a trusted source,” he said, adding that in the UAE one hive can produce anything between 5kg to 10 kg of honey per year.

Olivier has also expanded into carrying out other related activities such as helping people create their own bee garden. But even though he was new to beekeeping, Olivier said that he was familiar with the countryside as his grandparents had a farm in France. But what started as a hobby in Dubai, “grew out of proportion” and turned into a business. “You take a few hives and then you want to do more things, and my partner helped me,” he said.

His hives are in Jumeirah, but Olivier says that bees normally look for flowers around a 5km radius away from their hive. In the case of his bees, he says they may go as far as the Downtown area.

Urban beekeeping is something that many people don’t know they can do in their own homes, and they don’t know how to do it, he says. “They think they can’t do it here because it’s a desert city. Yes, but there’s tap water, so there’s vegetation,” he said. Olivier helps those wanting to try their hand at beekeeping install their first hive, and he then teaches them the tricks of the trade.

When comparing his new life to his previous corporate one, Olivier said that it is more physical, but taking care of bees is interesting as a hobby because you need to be focused. “You’re entering a new world and you have to be very calm because bees are very good at smelling and hearing with their antennas. So, when you’re near them, they can hear your heartbeat and if it is accelerated then they will be suspicious of you. This is literally “the smell of fear”,” he said. If they don’t feel threatened, they will not sting, he stressed.

Another activity that he regularly carries out is organising educational sessions on bees and beekeeping at schools. During the visits, Olivier takes a transparent beehive and talks to children about bees, the environment and bee conservation.