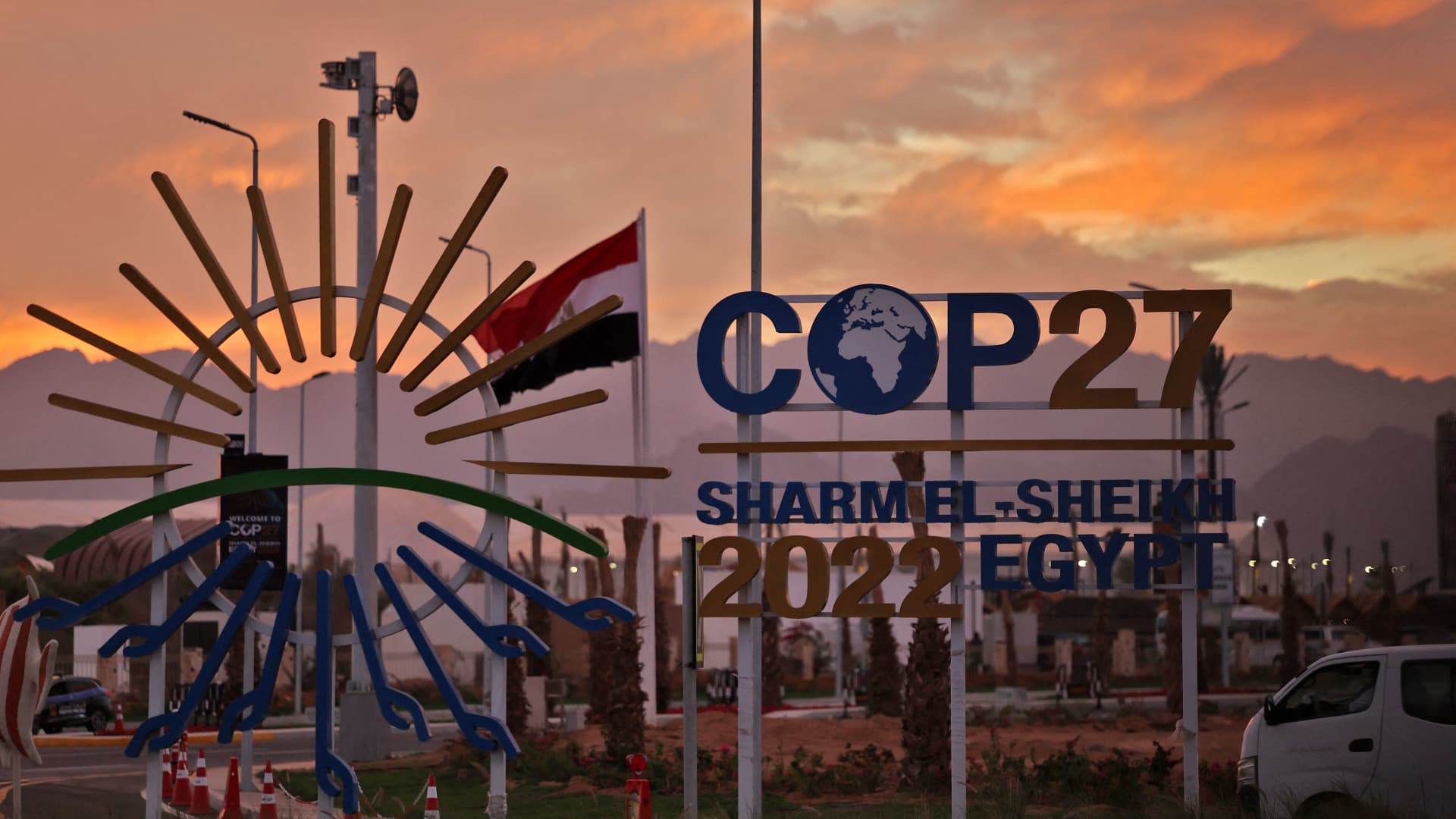 Negotiators say they have struck a potential breakthrough deal on the thorniest issue of United Nations climate talks, creation of a fund for compensating poor nations that are victims of extreme weather worsened by rich nations’ carbon pollution.

“There is an agreement on loss and damage,” which is what negotiators call the concept, Maldives Environment Minister Aminath Shauna told The Associated Press Saturday. It still needs to be approved unanimously in a vote later today. “That means for countries like ours we will have the mosaic of solutions that we have been advocating for.”

Saturday afternoon’s draft proposal came from the Egyptian presidency. A second overarching document from the climate talks leadership ignores India’s call to phase down oil and natural gas, in addition to last year’s agreement to wean the world from “unabated” coal.

According to the draft of the compensation proposal — the issue is called “loss and damage” in negotiations parlance — developed countries would be “urged” to contribute to the fund, which would also draw on other private and public sources of money such as international financial institutions. At the talks, the world’s poorest nations, which contributed little to historic emissions of heat-trapping gases, have been unified in insisting on such a fund.

“We managed to make progress on an important outcome,” said Wael Aboulmagd, who heads the Egyptian delegation. “I think we’re getting there.”

However, the proposal does not suggest that major emerging economies such as China have to contribute to the fund, which was a key ask of the European Union and the United States.

It also does not tie the creation of the new fund to any increase in efforts to cut emissions, or restrict the recipients of funding to those countries that are most vulnerable, which had been an earlier proposal from the Europeans.

Two drafts released by the Egyptian presidency, on efforts to step up emissions cuts and the overarching decision of this year’s talks, barely build on what was agreed in Glasgow last year.

The texts leave in place a reference to the Paris accords less ambitious goal of limiting global warming to “well below 2 degrees Celsius (3.6 Fahrenheit)” which scientists say is far too risky.

They also don’t suggest any new short-term targets for either developing or developed countries, which experts say are needed to achieve the more ambitious 1.5C (2.7F) goal that would prevent some of the more extreme effects of climate change.

Loss and damage has been the all-consuming issue during the two weeks of talks.

The EU made a surprise proposal days earlier tying a fund for climate disasters to emissions cuts that go beyond what the 2015 Paris climate agreement calls for. That landmark deal aims to limit global temperature increases to an ambitious 1.5 degrees Celsius (2.7 Fahrenheit), and no change this year could be interpreted as not strengthening efforts.

The meeting known as COP27 opened two weeks ago and had been scheduled to wrap up on Friday but looks set to drag on through the weekend.

Earlier on Saturday government delegations and the meeting’s Egyptian hosts pointed fingers at each other.

German Foreign Minister Annalena Baerbock said responsibility for the fate of the talks “now lies in the hands of the Egyptian COP presidency.”

She said the European Union had made clear overnight that “we will not sign a paper here that diverges significantly from the 1.5 Celsius path, that would bury the goal of 1.5 degrees.”

“If these climate conferences set us back then we wouldn’t have needed to travel here in the first place,” she said.

“The issue now rests with the will of the parties,” Shoukry said at a press conference. “It is the parties who must rise to the occasion and take upon themselves the responsibility of finding the areas of convergence and moving forward.”

He added that “all must show the necessary flexibility” in reaching a consensus, and that Egypt was merely “facilitating this process.”

In another setback, top U.S. climate envoy John Kerry tested positive for COVID-19 though he only has mild symptoms and is working by phone with his negotiating team and foreign counterparts, his spokesperson said late Friday.

Throughout the climate summit, the American, Chinese, Indian and Saudi Arabian delegations have kept a low public profile, while European, African, Pakistan and small island nations have been more vocal.

A key sticking point remains over the issue called loss and damage. The world’s poorest nations are insisting that western carbon-polluting nations establish a fund to compensate nations hurt by climate extremes, such as Pakistan and its devastating flooding, as the developing world put little of the heat-trapping gases into the atmosphere.

“These negotiations won’t work if it’s pitching one country against the other, one block against the other,” said Irish Environment Minister Eamon Ryan, one of the lead negotiators on loss and damage. “The only way it will work is if we sit down in collaboration and recognize we have common cause because we are in common peril and the only solution can be a good solution.”

Climate advocacy group Power Shift Africa’s Mohamed Adow blamed the United States and the European Union, saying “they’re the two groups of parties that are currently blocking and delaying the delivery of our solidarity outcome out of Sharm el-Sheikh.”

“We’re now, I must say, very close to getting a loss and damage fund,” Adow said. “And because of that we’re seeing one of the biggest historic polluters threatening to walk out.”

The United States may have moved a bit on its stance and seems more willing to accept the establishment of a loss and damage fund, but the division now is on where and how that fund is administered and who puts money into it, Waskow said.

Many of the more than 40,000 attendees have left town, and workers started packing up the vast pavilions in the sprawling conference zone.

COP meetings have evolved over the years to resemble trade fairs, with many countries and industry groups setting up booths and displays for meetings and panel discussions.

At many stands, chairs were stacked neatly ready for removal, and monitors had been taken away, leaving cables dangling from walls. Pamphlets and booklets were strewn across tables and floors. Snack bars, which the Egyptian organizers said would remain open through the weekend, were emptied out.

At the youth pavilion, a gathering spot for young activists, a pile of handwritten postcards from children to negotiators was left on a table, in what was perhaps an apt metaphor for the state of play as the talks bogged down.

An occasional gust of wind from the open doors nearby blew some of the cards onto the floor.

How The Purge Series Holds a Mirror Up to America