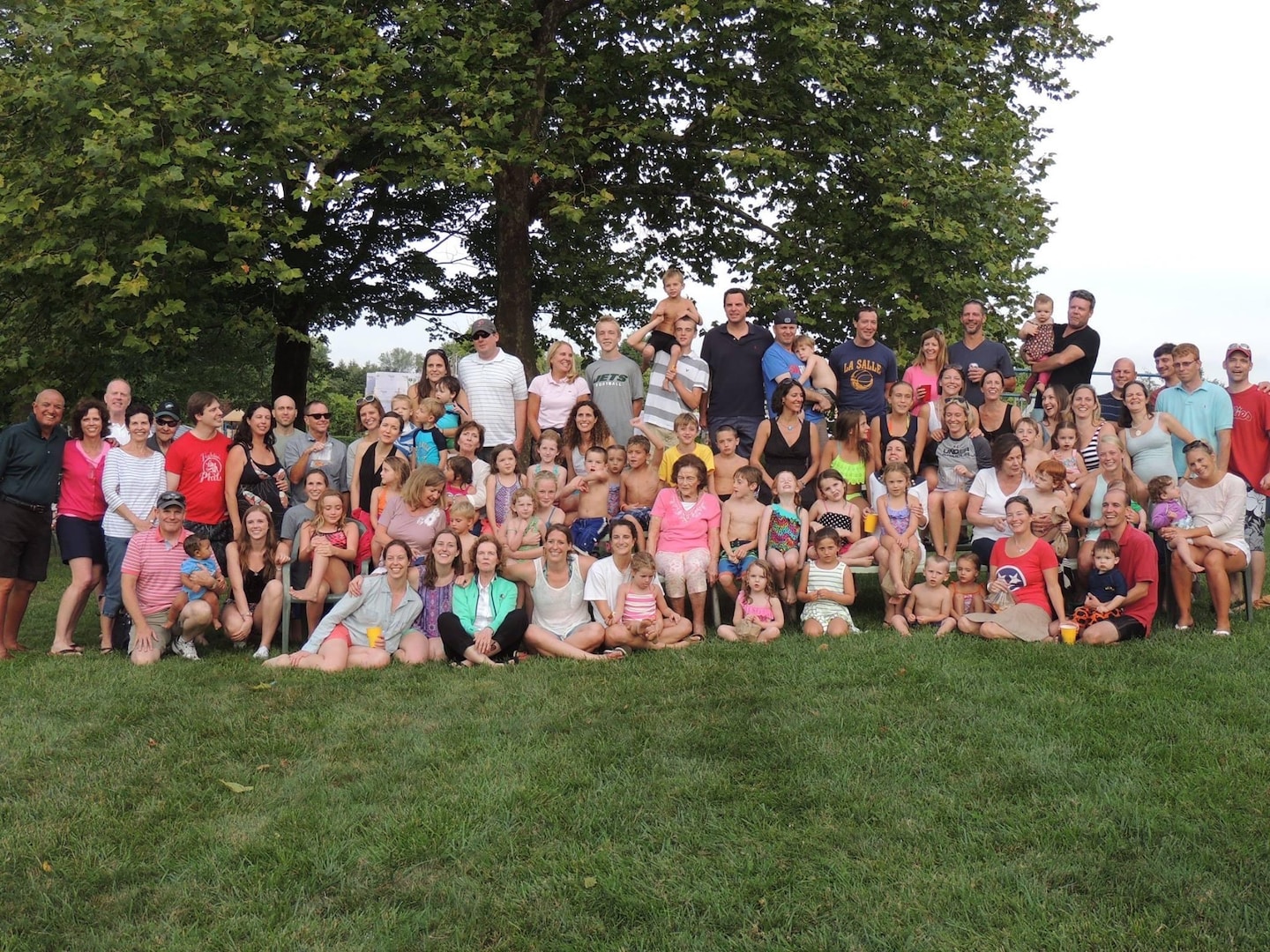 Life as an only child was lonely for Marguerite “Peg” Koller.

“I had to go outside to find kids to play with,” said Koller, 99, who grew up in Philadelphia, and now lives in Montgomery County, Pa. “I definitely wished I had siblings.”

More than just a brother or sister, she longed for a large family. So when the time came for her to start her own brood, she went with a “more is more” mentality.

Koller and her late husband, William, who came from a compact family of four, had 11 children, 56 grandchildren and, as of Sept. 19, 101 great-grandchildren and counting.

She has fond memories of being a young mother. It was chaotic, to be sure, but “I look back, and I don’t think about it being hard,” she said, except perhaps getting everyone dressed and ready for church on time. But the small struggles were a fine exchange for having a full house.

“I just loved having them, and having so many people around me,” she said, adding that her 11 children were born over a span of 19 years.

At one point before she got married, however, she nearly became a nun. As a teen, she applied to join the convent and was accepted.

Despite her hope for a large family, “I just felt I had a vocation,” said Koller, explaining that she is a person of faith and a Catholic.

It was her mother and then-boyfriend (who later became her husband of 66 years), who convinced her to get married instead and, in hindsight, she’s glad they did. Her family, she said, is her greatest source of pride.

In 1942, Koller married William Koller, a World War II veteran who died in 2008. Together, the couple started Koller Funeral Home in Philadelphia, which still exists today and is run by several family members.

The couple was not sure at first how many children they wanted, but once they got started, “we just kept going,” Koller said, adding that her life was never lonely again.

The Koller kids, for their part, loved living in a jam-packed household, where there was no shortage of action and entertainment.

“It was such a great experience growing up in our family,” said Chris Kohler, 60, who was the ninth born, and married a man with the same last name, though spelled differently. “Even now that we’re all grown up, we’re still such great friends.”

Having their steady-handed parents as role models, she said, made the siblings close.

“They had such a great relationship,” Kohler said, explaining that they split household duties equally, including cooking and cleaning. “They worked hand in hand in the business and at home.”

“They always had to be together, always holding hands,” she continued. “I was hoping that I would find something like that for myself.”

Go ahead and stare at my prosthetic arm. I know it is awesome.

Not only did Kohler want to emulate her parents’ relationship, she also wanted the energy and fullness of her childhood home.

“We had so many brothers and sisters around to play with and help us. That made an impression on me, and so I always wanted to have a big family,” said Kohler, who went on to have six children and 14 grandchildren so far.

Her siblings, too, all had an above average number of kids. The fertility rate in the United States is 1.78 births per woman, and the majority of the 11 Koller siblings had more than five children each.

The many-sibling mind-set carried over to the next generation. Greg Stokes, 41, Koller’s grandson, is a father of four girls. “Coming from a large family, I always wanted people around,” said Stokes, who has eight brothers and sisters. “I think everybody in my family wanted to have multiple kids because of the energy and the excitement.”

Although he is one of 56 grandchildren, Stokes, who also lives in Montgomery County, easily developed a tight bond with both of his grandparents. He has vivid memories of attending a local swim club with his grandparents and cousins in the summertime, and he often takes his daughters there.

“Everybody always had a really close relationship with grandmom and grandpop, and really with each other,” Stokes said, adding that he and his cousin lived together in college and for several years after. “We would have sleepovers at grandmom and grandpop’s, and every Christmas Eve, there’s a big party.”

Throughout life’s challenges, including his brother’s death at age 12, having countless people to lean on made the pain easier to bear. “It’s definitely been a very unique experience,” Stokes said, adding that the majority of the extended family lives in Pennsylvania.

He plays college football in North Dakota. And he is 49 years old.

Part of what has kept them close, he continued, is his grandmother’s unwavering dedication to each member of the family. “She is there for every high school and college graduation,” Stokes said. “She always makes an effort to be present.”

In fact, six years ago, when two family weddings were scheduled on the same day (hazard of a big clan), she made it to both, despite the celebrations being more than an hour’s drive apart. She had a similar experience with two of her grandchildren’s graduation ceremonies.

“For all our kids’ graduations and baptisms and birthday parties, she always wanted to be there,” Kohler said of her mother. “Her family is her life.” Koller loves attending milestone events, and thinks they are important markers of life.

“I don’t miss parties,” said Koller, explaining that her faith, a balanced diet and regular exercise — she lifts weights twice daily — is the secret to her long life. Koller passed down the same values in her children, grandchildren and great-grandchildren.

When Chrissy Balster’s son was born — bringing the great-grandchildren count to 100 — she and her husband brought their newborn baby directly from the hospital to visit their grandmom.

“No matter the size of the family, how big it grows, how far away we are, those lessons that my grandparents started 75 years ago are very much rooted in all of us,” said Balster, 34, whose son was born on Aug. 4, and was named “Koller William” after his great-grandfather.

Introducing the 100th great-grandchild to his great-grandmother, Balster said, was a moment of pure joy for all of them, but especially her. “It was so exciting to bring together these two amazing people,” she said. “We are just so lucky to be a part of her legacy.”

Holding her newborn great-grandson in her arms for the first time, “I thought about my husband,” Koller said. “He would be so thrilled.” Although it’s become increasingly difficult to get the growing family together, the Kollers still have an annual Christmas Eve party, as well as regular reunions. They also stay connected through social media.

Just as Koller has never missed a major milestone, her family, which now consists of close to 250 people including spouses, also try to be present at all her big celebrations.

The whole family, including the newest great-grandson, who was born last week and is also named after his great-grandfather, William, is coming together to mark their matriarch’s 100th birthday on Nov. 28 at a local country club.

She said she is excited to work her way around the room and chat with her many, many family members. And she has been clear with her family about something else: “I’m going to get up and dance,” she said.

Do you have a story for Inspired Life? Here is how you can submit.