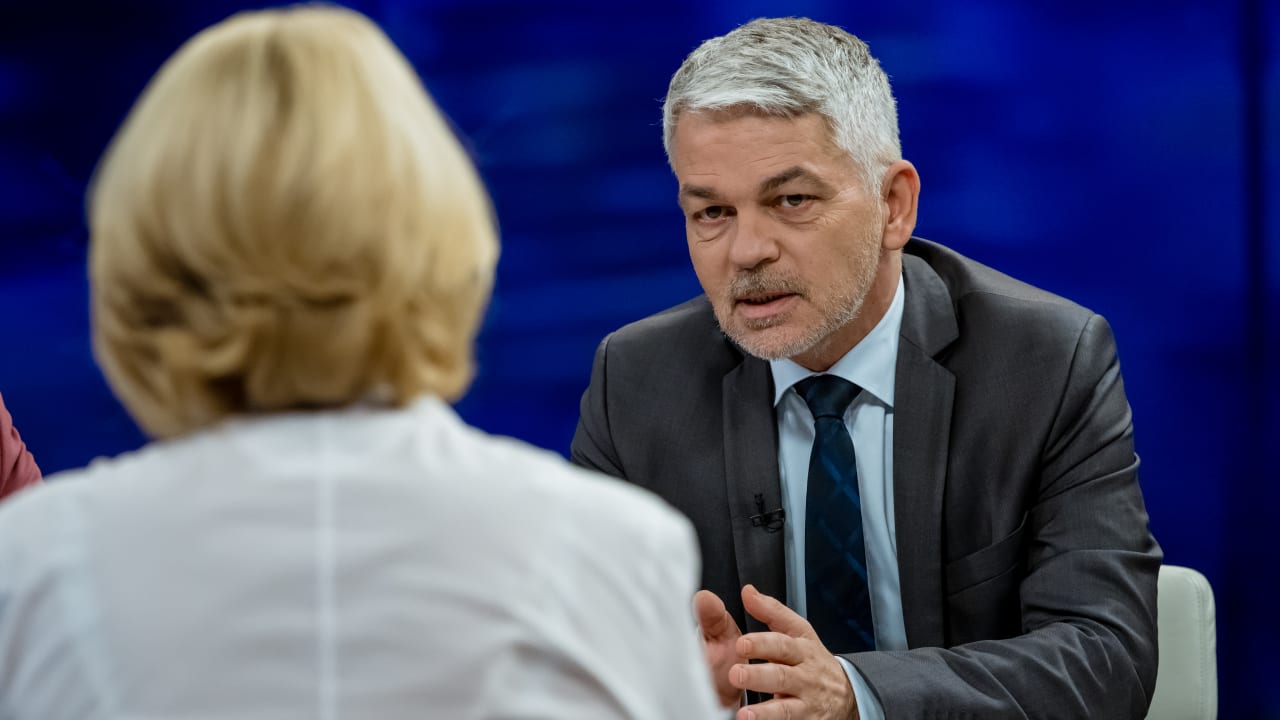 Putin’s mass mobilization also reveals that his troops in Ukraine are nothing but cowardly murder gangs.

There is looting everywhere, Russians are fighting non-Russians for the loot, wounded front-line soldiers are being shot by their own people. Maybrit Illner is shocked: “The war is escalating – how dangerous is Putin’s weakness?”

Norbert Röttgen (57, CDU). The foreign policy expert suspects more cautiously: “Putin threatens to fail in the realization of his obsession to destroy Ukraine.”

Professor Carlo Masala (54). The military expert believes: “Putin is aware that all nuclear threats have fizzled out so far.”

Rüdiger von Fritsch (68). The former ambassador in Moscow warns: “We must not fall into Putin’s fear trap!”

Katrin Eigendorf (60). The ZDF war reporter said yesterday on “Maischberger”: “Putin has never been hit as badly as he is now since he came to power.”

There are no longer any two opinions about Putin’s goals on serious talk shows, but the countermeasures, as the Zoff-o-Meter also knows, remain highly controversial. Also in this round of six?

Clearest picture of the situation

“Putin’s authority is crumbling. Partial mobilization will increase its weakness,” predicts Röttgen. “This war is now hitting the kitchen tables in Russia,” adds Klingbeil. “Today we saw pictures of fathers who had to leave their families in tears.”

“This war is being taken to the ethnic Russians,” observes Prof. Masala, “and that could be on a completely different scale.” that sounds cynical, never mind.”

“Now they get younger and older men who train them for two, three or four weeks and then throw them at the front,” says the professor, describing Putin’s mobilization problems. Also, “Winter is coming now. Where do 300,000 reservists get protection from the cold?”

Masala’s analysis: “This is an act of desperation. Putin sends a lot of cannon fodder to the front. In the south, 20 to 30 battalion tactical groups are in danger of giving up because they are cut off from supplies. 20,000 men maximum. Even if it’s only 10,000, the southern front will be gone!”

“Even the word ‘mobilization’ was enough to trigger the panic,” says journalist Adler. “Putin hadn’t mentioned the number (of conscriptions), it was classified information and extremely controversial.”

“But then,” the DLF reporter continued, “Shoigu made a mistake: he spoke of 25 million reservists. With 140 million people, that means: everyone who is male and has two legs has to go. That triggered the panic. Protests in 40 places, 1400 arrests!”

“When you say ‘We don’t want Russia to lose’, that means that Russia somehow wins too,” warns Röttgen. “Then the world will learn that war as a political tool is worthwhile.”

His concern: “The moment Putin achieves anything, he will continue. Winning Putin means a continuation of war. Ukraine must win. This is the most important point to get peace again.”

“The war was not worth it at the moment when the status before the war, January 2022, was reached,” adds the CDU politician. “I wouldn’t go back to 2014.”

The talk show host got it right away: “Well, not the Crimea!”

“The German position should be: We don’t support that,” Röttgen replies. “That has to be achieved politically and diplomatically.” The nervous waving of his hands indicates that he himself is not really convinced.

“The message ‘Don’t irritate us too much’ is part of Russian propaganda and the fear trap that he wants us to fall into,” explains von Fritsch. This also includes “this constant murmuring about the nuclear weapon”.

According to the old Kremlin expert, behind the massive mobilization is that Putin is “trying to secure and hold a certain position.” After a ceasefire, he could then use his propaganda – liberation of the Donbass from Nazis – to sell it as a victory.

Most hopeful assessment of the situation

“The Russians are trying to hold the Oskil River as a line of defence,” reports Prof. Masala. “The Ukrainians are very successful in denying them that. They keep the Russians moving, keep destroying logistics.”

His latest success story: “Just before this show started, there were rumors that Ukraine had made a breakthrough at Liman in the northeast. In Bachmut they seem to be very successful. They attacked Cherson. This is all in preparation for a new offensive.”

“What we will see in the next few days,” predicts the expert, “are attacks on the central offices where this sham referendum is being held.”

“In 2014, people in Ukraine actually believed that the Ukrainian army was killing their children,” the ZDF war reporter shudders, but: “It’s not like that anymore.”

The best example: Isjun, which had just been liberated, was, according to Eigendorf, “clearly a Soviet city. Today they see Russia as an enemy and say very clearly: That was a mistake back then. Putin never wanted to represent our interests.”

The DLF journalist mercilessly settled accounts with the former chancellor: “Merkel marched in the wrong direction with the SPD at her side,” she complains, wagging her index finger. Germany’s gas dependency contributed to Russia’s armament eight years ago, after Putin’s war against eastern Ukraine.

“It always went unchecked in the wrong direction,” the journalist continues to complain, “that important infrastructure was handed over to Russia. The gas storage. The PCK (Schwedt). Nord Stream 1 and 2. Nobody stopped it!”

Your question: “Isn’t it worth setting up a committee of inquiry in the Bundestag? Who was so surrounded by lobbyists? Did corruption also play a role?”

“Now every single German citizen has to pay the bill,” Adler raves at the end. “It will plunge people into deep poverty. There will be a general impoverishment of the population. We have the SPD and the CDU/CSU to thank for that!”

“I would see a few nuances differently,” Röttgen replies, “but that now in 2022 I’m defending what I criticized in 2015 — I didn’t stop it, I didn’t have the position of power, but I’ve had it uninterruptedly since 2015.” and public…”

“Let me say it again,” the journalist interrupts. “You were the big exception who kept saying: That’s wrong.”

The CDU politician uses the relief as a political offensive weapon: “You have to talk about Manuela Schwesig, the prime minister who is still in office,” he suggests.

But the talk show host immediately turns on the defense booster: “She was on the show last week and said, of course, there was a federal government that supported it.” Uff!

“I’d like to say something,” Klingbeil announces, but Illner lets him stew: first she prefers the ambassador, then she adds her two cents herself.

Only after four minutes can the SPD leader finally counter. “There was a broad consensus that went far beyond the SPD and CDU/CSU to say we’d be happy to take cheap Russian gas,” he recalls. “There is a thinking that starts with Willy Brandt’s policy of détente, that one wants to cooperate with Russia.” Wow!

“In a speech a few weeks ago, I made it very clear to myself that we made mistakes, as a politician, but also as an SPD,” Klingbeil then admits, “because we didn’t interpret Georgia correctly in 2008 and Crimea in 2014.”

His expectation: “That we now look: How can I align a new Ostpolitik in which I include Poland and the Baltic States much more? For me, that is one of the consequences that follows from this.” Setting up a committee of inquiry is a matter for the opposition.

Finally, the Zoff-o-Meter kicks in

“Mr. Klingbeil!” warns the DLF journalist sternly. “People want to know who got them this soup! It must be called horse and rider! This was done with incredible selfishness, which criminally disregarded the interests of our neighbors.” Boom!

When Röttgen takes aim at Schwesig again, the goat is fat: “Everything was the SPD!” Klingbeil growls. “It was both of us! Both made mistakes. Please don’t say in every sentence, that was the SPD!”

“The CDU must also endure a full investigation,” Röttgen hurriedly admits, but Klingbeil is still not enough: “The CSU too!” he demands – the state election campaign has just begun in Bavaria…

quote of the evening

The Ukrainians need movement, armor protection and firepower. Movement is the marten, firepower could be tanks.

Interesting information, strong arguments, argumentative guests, but the Chancellor’s Party still can’t get the essentials together: It was a talk show in the category “a lot of whipping, little cream”.