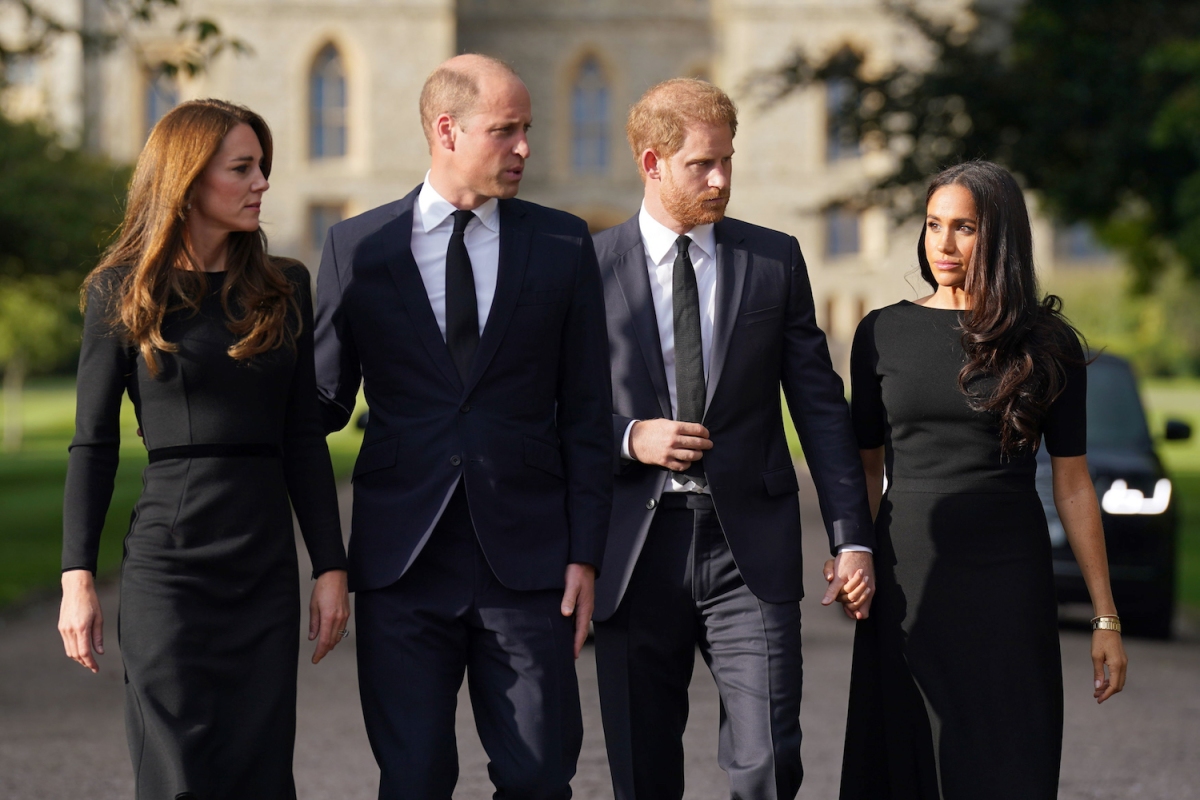 According to a new book, Meghan Markle was “obsessed” about trying to set the record straight regarding her alleged feud with Kate Middleton. The author shared that Meghan wanted to have the palace release a statement but they reportedly didn’t want to “create a precedent.”

Rumors swirled about how Meghan made Kate cry after a disagreement involving Princess Charlotte’s flower girl dress fitting ahead of Harry and Meghan’s wedding.

In the book Courtiers: The Hidden Power Behind The Crown, author Valentine Low claims Meghan “became obsessed” with wanting the palace to release a statement to clear up the rumors.

In a book excerpt published on the Daily Mail website, Low wrote, “The overriding issue that concerned her was a newspaper story about Kate crying after a bridesmaid’s dress fitting for Princess Charlotte that took place before the wedding.”

Low noted, “The truth is that, after the dress fitting, Meghan had become obsessed with trying to persuade the palace press office to put something out denying the story.”

Things didn’t play out that way, however, as the palace didn’t want to “create a precedent.”

The author noted, “They were equally adamant that it would be a serious mistake to start briefing about personal stories relating to differences between members of the royal family.”

He continued, “Not only did they not want to brief against other royals, but they feared it would create a precedent, making it harder in the future for them to avoid commenting on personal tittle-tattle.”

Low added, “It would also fan the flames of the story, ensuring it continued to fill the pages of the newspapers for several days to come. This became a major point of contention between Meghan and her media advisers.”

Meghan set the record straight in her Oprah interview

Of course, the palace didn’t release a statement but Meghan took the opportunity to clear things up during her 2021 interview with Oprah Winfrey. According to Meghan, Kate made her cry — not the other way around.

Low wrote, “It was not an attractive performance: Meghan had spent months complaining about how her reputation had been smeared in the press, and now she was doing the same to Kate, who quite clearly was never going to respond.”

When Oprah asked, “Did you make Kate cry?,” Meghan said, “the reverse happened.”

She continued, “And she was upset about something, but she owned it and she apologized. And she brought me flowers and a note apologizing. And she did what I would do if I knew that I hurt someone, right? To just take accountability for it.”

Meghan said it was “shocking” that the story surfaced six or seven months after the wedding. “I would have never wanted that to come out about her. Ever, even though it had happened. I protected that from ever being out in the world,” she said.

Meghan confirmed that Kate “made me cry,” telling Oprah, “It really hurt my feelings and I thought in the context of everything else that was going on in those days leading to the wedding, that it didn’t make sense to not be just doing whatever, what everyone else was doing which was trying to be supportive knowing what was going on with my dad and whatnot.”

Meghan Markle found it hard to be ‘blamed’ in the media

When Oprah asked if “there was a confrontation over the dresses,” Meghan explained what happened.

“It wasn’t a confrontation,” she said. “I don’t think it’s fair to her to get into the details of that because she apologized and I’ve forgiven her.”

Meghan continued, “What was hard to get over was being blamed for something that not only I didn’t do, but that happened to me. And the people who were part of our wedding going to our comms team and saying, ‘I know this didn’t happen.’ I don’t have to tell them what actually happened.”

The Duchess of Sussex was clear about why it was important to her to explain how things really played out. “I think it’s really important for people to understand the truth,” she said. “I would hope that she would have wanted that corrected and maybe in the same way that the palace wouldn’t let anybody else negate it, they wouldn’t let her because she’s a good person.”

She added, “I think so much of what I have seen play out is this idea of polarity, where if you love me, you don’t have to hate her. And if you love her, you don’t need to hate me.”