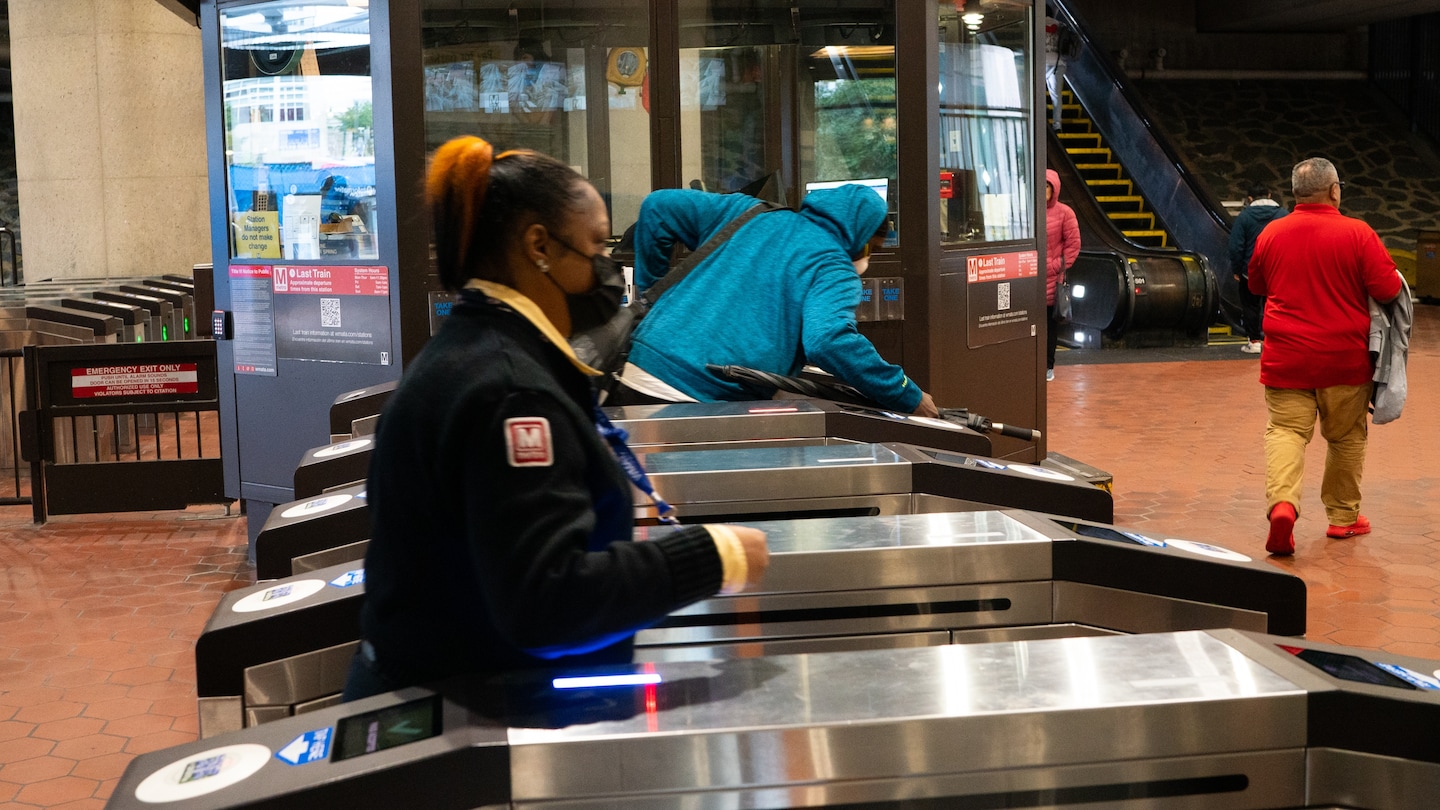 Metro will begin issuing tickets to nonpaying riders in the District to curb a pandemic-era rise in fare evasion, a dramatic shift for a transit agency that has mostly ignored the issue since the city decriminalized the act four years ago.

The enforcement campaign, which extends systemwide, began Tuesday with transit police officers being told to issue warnings this month to violators on Metrorail and Metrobus. Police will begin issuing citations in November.

The change comes as Metro is facing a significant shortfall in its operating budget next year and in subsequent years because of a shift to telework. It also follows a steep drop in fare-evasion tickets and arrests in recent years, with 15,000 such cases in 2017 falling to fewer than 300 last year. None of those in 2021 occurred in the District, which barred arrests — but not civil citations — when decriminalizing the offense in 2018.

Metro General Manager Randy Clarke told D.C. Council members during a meeting Tuesday that the transit agency plans to hire mental health crisis intervention professionals and “customer experience liaisons” to “maintain some orderliness.” After years of lax enforcement in the city, the changes could be a shock to many who have regularly jumped over fare gates in the rail system or skipped past fare boxes on buses.

Fare evasion in D.C. will carry a $50 fine, which is set by the city and was lowered after decriminalization, while fines in Maryland and Virginia are up to $100, Metro said.

Fare evasion in D.C. is rising. Money troubles are pushing Metro to confront it.

A funding gap of nearly $185 million in the next fiscal year and more than $500 million the following year is forcing Metro’s board to consider outside sources for assistance, which could include requesting more subsidies from the jurisdictions that contribute most of the system’s funding. The agency could also consider seeking a tax referendum, which also would require support from regional leaders.

Local officials, who have grown frustrated over a train shortage stemming from the suspension of half of Metro’s rail car fleet, want Metro to police fare evasion more effectively to demonstrate the agency is doing its part on revenue.

Metro stopped civil citations in the District because transit officials said legal issues prevented them from handing out legally binding tickets — a contention at least one D.C. Council member disputes. Those issues, Clarke said, have been resolved and the agency should have tickets ready to issue in the District in November.

Metro had continued to issue fare-evasion citations in Virginia and Maryland in recent years, although those numbers had fallen significantly.

Clarke said in an interview Tuesday that Metro estimates it loses $40 million a year to fare evasion, money he said the transit agency needs to stave off service cuts. That amount is about 2 percent of Metro’s operating budget next year, which officials have said is projected to surpass $2 billion.

A Metro report earlier this year showed Metrobus riders skipped paying a fare on 34 percent of trips, a percentage that had doubled during the pandemic. The transit agency said 17 percent of bus trips were unpaid between July and the end of December 2019.

Metrobus operators do not enforce fares, according to a bus operator training manual. After attacks on bus operators over the years, the transit agency told drivers to leave fare enforcement to transit police.

Concerns that police were disproportionately targeting Black residents in the District led the D.C. Council to decriminalize fare evasion. Civic activists said Tuesday that they were discouraged that Metro didn’t outline any special oversight or independent monitoring of police while unveiling the enforcement plan.

“Where is the accountability for when their officers overstep their bounds?” asked Carlean Ponder, co-chair of the Silver Spring Justice Coalition. “It’s not that people are in widespread favor of gate jumpers. … It’s just that we’re obviously wanting to see some accountability for police officers when they’re engaging with the public.”

“We have concerns about Metro’s new enforcement initiative for fare evasion because in the past, Metro Transit Police have disproportionately targeted Black riders for stops, tickets, and arrests, and these stops have​ resulted in ​excessive use of force against riders by police,” ACLU-D.C. Policy Director Nassim Moshiree said in a statement. “These interactions have been dangerous, and they have harmed community trust in law enforcement.”

Clarke did not directly address these concerns but said he would prefer that officers didn’t have to confront anyone.

Metro will have the ability to “actually issue citations,” Clarke said, indicating legal issues that Metro said had held it back had been resolved. He said the D.C. government is printing the tickets.

“We are just about to receive those tickets from the District,” Clarke said, adding that Metro had tickets from other jurisdictions in the region. “Until we receive those [from D.C.], we have had no ability to do civil enforcement.”

Council member Charles Allen (D-Ward 6) said in an interview that D.C. law never precluded Metro from fare-evasion enforcement, which he said he supports. He said he doesn’t know why Metro didn’t act sooner, but said he’s pleased Clarke is taking action about two months into his role at Metro.

Clarke said the transit agency will launch a campaign ahead of November in the hope Metro can discourage fare evasion before the agency begins to increase enforcement. He said transit officials worked on a revamped police deployment plan that includes “way more officers” on trains and buses and at bus stations and rail stations, with higher visibility across different times of the day.

Sisi Rojas, who waited for a Green Line train Tuesday at the Petworth station, voiced concerns over police targeting Black residents and other groups, but she said she supports the increased enforcement.

“I feel like there should be some type of consequence for not paying your fare, just because at the end of the day, there are hard-working people out here, just people that are doing the right thing and paying the fares,” said Rojas, 26, who lives in Prince George’s County.

Robyn Swirling, a Petworth resident, said enforcement will only hurt those who need transportation the most.

“I don’t think that more policing is the solution to our problems,” said Swirling, 36. “I think that people are evading fares generally because they either don’t have the money or because the cost of Metro compared to its service lately doesn’t particularly feel worth it.”

Lucinda M. Babers, D.C. deputy mayor for operations and infrastructure and a Metro board member, said in a statement that Mayor Muriel E. Bowser (D) believes Metro riders should follow the rules and pay their fare, while adding, “We believe education and compliance are critical steps before enforcement.”

Clarke said fare enforcement is among the fare policy questions the region needs to discuss, including whether Metro should charge fares at all or whether it should provide deep discounts to low-income riders. He said he remains “agnostic” on those ideas but supports elevating that discussion among regional leaders, saying a sustainable revenue source is key.

“Nothing is free, but we could have free fares. That is a policy decision this region could make and decide to fund,” Clarke said. “My job is to run the system as it is, and right now fare revenue accounts for a component of our revenue to run the system.”

He described the transit agency’s new customer experience liaisons as civilian workers tasked with giving riders directions and being the “eyes and ears” of the agency. Metro is also hiring what Clarke called mental health crisis intervention specialists, trained to help people who are experiencing mental health episodes.

Clarke called the changes part of the agency’s “multi-spectrum approach to public safety.” Other changes will include increased lighting and video screens that show riders they are on camera.

“The idea is you are being watched,” he said. “Please respect the community’s transit system. Don’t do bad behavior on this system.”

10 Horror Movies That Will Make You Rethink Attempting Winter Sports