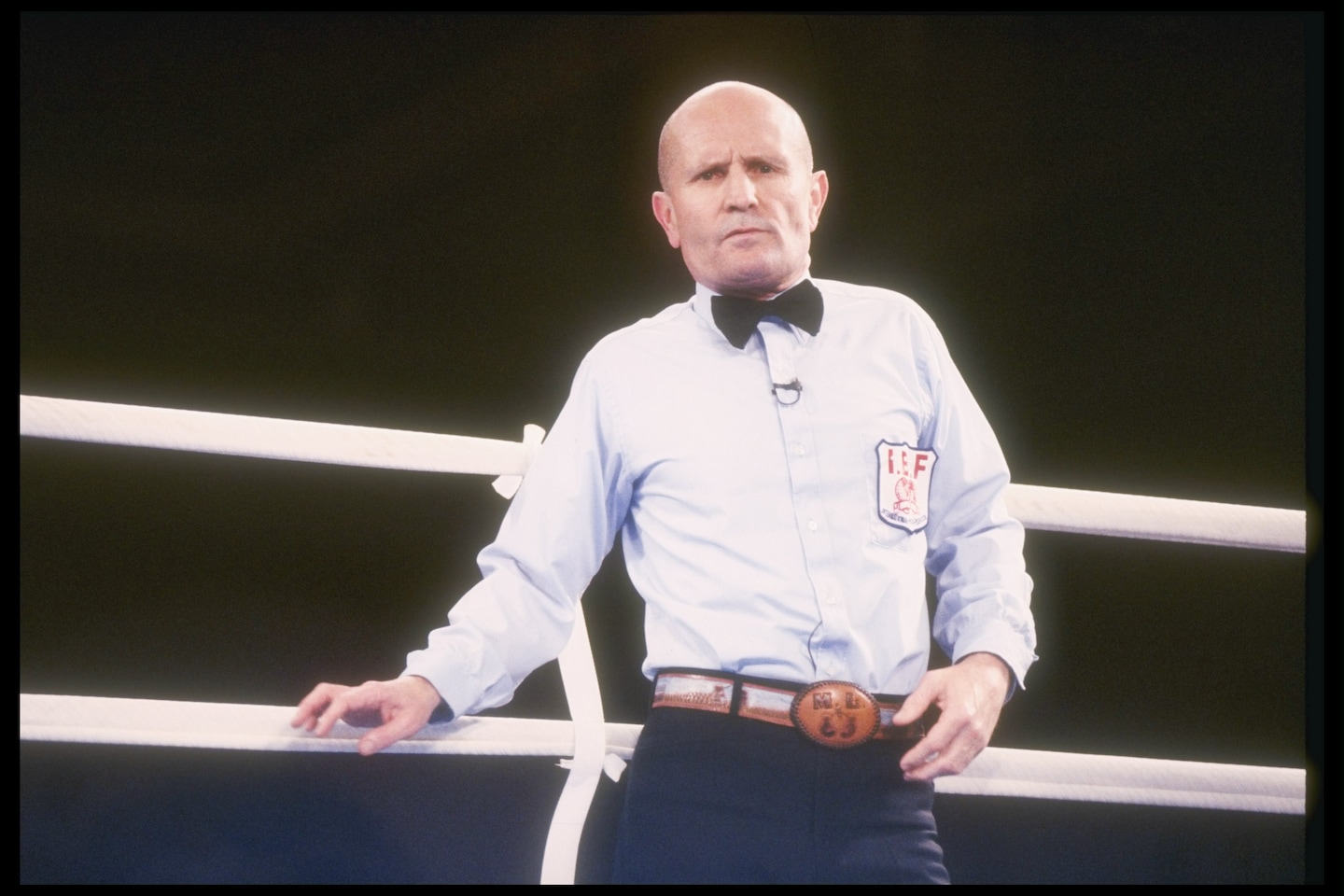 Mills Lane, a full-time judge and part-time boxing referee who became one of the sport’s most recognizable figures after disqualifying Mike Tyson for chomping off a slice of Evander Holyfield’s ear during a 1997 championship bout, died Dec. 6 at his home in Reno, Nev. He was 85.

The cause was kidney failure, said his son Tommy Lane.

With his signature pre-fight line — “Let’s get it on!” — Mr. Lane was the third man in the ring for more than 100 championship fights, many televised nationally, among boxing greats such as Muhammad Ali, Sugar Ray Leonard, Larry Holmes, Roberto Durán and Marvelous Marvin Hagler.

Mr. Lane, a former boxer and Marine who became Washoe County district attorney in 1982 and a judge in 1990, was revered and feared for his law-and-order demeanor in the courtroom and boxing ring. “He’s a hard hitter,” a defense lawyer told the Los Angeles Times in 1991. “When you went to court against Mills and you weren’t prepared, he’d run over you like he was in a truck.”

At 5 feet 7 inches and weighing less than 150 pounds, Mr. Lane had to implore a similar temperament in the ring to control men who made him look miniature in comparison.

“As the referee, you’ve got to preside over this licensed wrath while keeping a tight rein on order,” he noted in “Let’s Get it On,” his 1998 autobiography written with Jedwin Smith. “That’s the job — keeping up with the pounding action, slipping in and out of that specter of unmitigated furor and confusion, prying apart hundreds of pounds of frustration, rage, and fury.”

Rage and fury are on the card of every boxing match, but the June 28, 1997, fight between Tyson and Holyfield turned into a spectacle of near-madness. Tyson was furious after being head-butted by Holyfield in the second round. He emerged from his corner in the third with a flurry of punches. Then, with under a minute to go, Tyson bit off about an inch of Holyfield’s right ear, spitting it to the mat.

Mr. Lane, out of position, missed it. Still, he knew from Holyfield’s reaction that something worse than a punch was afflicting him. “Evander reared back and clutched at his right ear as he leaped into the air and spun completely around,” Mr. Lane wrote in his book. “And that’s when I saw the blood streaming from his ear. Talk about insane moments.”

Holyfield flailed his arms around, acting “like a man who had just been attacked by a swarm of hornets,” Mr. Lane wrote. Meanwhile, Tyson had “a stone-cold mask of loathing; his squinting eyes were glaring pinpricks of pure hatred. His hands were thrust out in front of him, waist high. It was almost as if he were strutting, admiring his handiwork.”

Both fighters went back to their corners. Mr. Lane consulted with boxing officials but allowed the fight to go on, penalizing Tyson with a two-point deduction. “If you bite him again,” Mr. Lane screamed at Tyson, “I will disqualify you!”

Shortly after the fight resumed, Tyson did bite Holyfield again, this time in the left ear, though not as damaging. Mr. Lane ended the fight. Holyfield needed surgery that night to repair his ear. (The cartilage had been found in the ring but was lost on Holyfield’s ambulance ride, according to the New York Times.)

For Mr. Lane, the incident was a public relations bonanza.

“Because of Tyson’s despicable behavior and the subsequent justice I handed down were witnessed by tens of millions of spectators on live television, I was catapulted into national prominence,” Mr. Lane wrote. He appeared on Larry King and Jay Leno’s TV shows. He spoke about refereeing at conferences and business conventions. Paramount made him a TV judge, calling the syndicated program “Judge Mills Lane.”

Mills Bee Lane III was born Nov. 12, 1937, in Savannah, Ga., to a family that is “our equivalent of the Rockefellers,” a family friend told the Los Angeles Times. The family owned Citizens and Southern Bank, then the largest bank in the state, but Mr. Lane’s father wanted nothing to do with the business, moving his family to a rice plantation in South Carolina.

Mr. Lane grew up listening to prize fights on the radio and shadowboxing in his room. His family sent him to Middlesex Boarding School in Massachusetts, where he played hockey. After graduating in 1956, Mr. Lane joined the Marine Corps. He took up boxing while stationed in Okinawa, Japan.

He left the Marines three years later and enrolled at the University of Nevada at Reno, where he joined the boxing team and, in 1960, won the NCAA title in the 147-pound weight class. He turned pro after graduating in 1963, going 10-1 before retiring. He refereed boxing matches to make money for law school, graduating from the University of Utah in 1970.

Mr. Lane then became a prosecutor in Nevada, earning the nickname “Maximum Mills” because of his ability to get long sentences for criminal defendants. He knew many people did not like him. For protection, he bought a gun he named “Dr. Colt.”

“The reason I carry a Colt and not a Smith & Wesson,” he told the New York Times in 1997 shortly after the Tyson fight, “is because a Smith & Wesson you only get five. A Colt, you get six. Dr. Colt. It goes everywhere I go, brother. Except on the airplanes. The government takes a dim view of that.”

Mr. Lane steadily climbed the ranks as a referee. In 1972, he was in the ring when Ali took on Bob Foster. His first heavyweight title match came six years later — Holmes vs. Ken Norton at Caesars Palace in Las Vegas. Holmes won in a brutal 15-round bout considered by many to be one of the greatest fights in history.

The job weighed on Mr. Lane — particularly decisions over stopping fights when a fighter’s life was on the line. “My window of time is about a quarter of a second,” he told the Daily Mail in 1996. “That’s how long I’ve got to make a lot of decisions. How hurt is the guy? Can he defend himself? Basically is he in real trouble? It’s not long.”

Mr. Lane retired in 1998 and suffered a major stroke four years later. In 2013, he was inducted into the International Boxing Hall of Fame. His first two marriages ended in divorce. He is survived by his third wife, the former Kaye Pearce, whom he married in 1980, and their two sons, Tommy and Terry Lane, both of New York City.

Despite his tough reputation, there were lighter moments in Mr. Lane’s legal career. When couples wishing to marry entered his courtroom, he would ask whether they realized marriage was a “life sentence, no parole.”