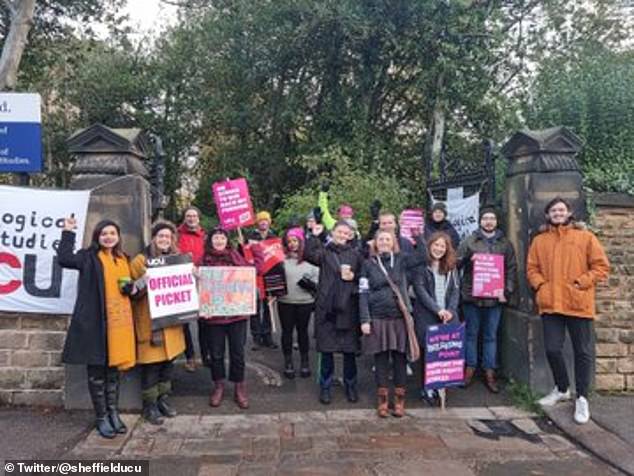 Around 2.5 million students will have their lessons disrupted as 70,000 lecturers and university staff hold their biggest-ever strike today and vow not to reschedule any cancelled classes, while almost every school in Scotland shuts as teachers walk out.

University and College Union (UCU) members will walk out at 153 universities over pay, conditions and pensions today, tomorrow and next Wednesday.

Classes are expected to be cancelled and libraries may close, with strikers refusing to reschedule missed work or provide online catch-up as pickets are set up across the country.

Meanwhile, every school on the Scottish mainland will be shut as thousands of teachers picket their workplaces and members of the Educational Institute of Scotland (EIS) demand a higher pay packet, with warnings of more strikes to come.

Education Secretary Shirley-Anne Somerville warned the Scottish Government’s budget is under ‘extreme pressure’ and the 10 per cent rise demanded is ‘unaffordable’ after a last-ditch offer was made in a bid to avert the strike.

But Andrea Bradley, the union’s general secretary, dismissed the latest proposal, in which the lowest-paid staff receive a 6.85 per cent increase with most getting a 5 per cent rise as ‘simply a lazy reheating of the offer that our members have already rejected’.

More than 70,000 lecturers and other staff at 150 universities will strike, starting today 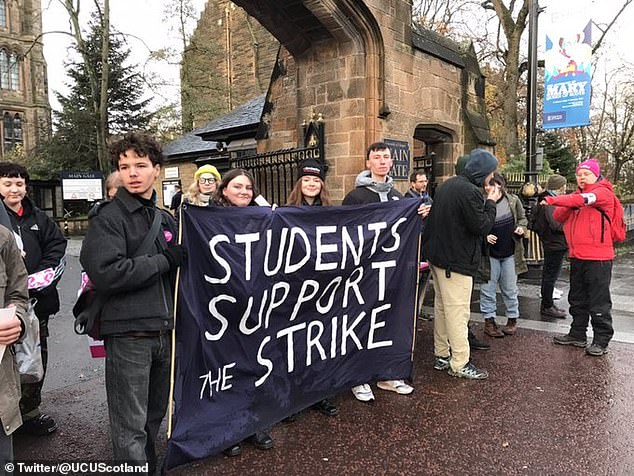 Around 2.5 million students will be impacted by the strikes, but the National Union of Students supports it. Pictured: A protest outside the University of Glasgow

‘Such a pathetic, divisive offer will never be acceptable to the EIS or to Scotland’s teachers, and Scotland’s teachers will be out in force today – on picket lines outside schools and at pay campaign rallies across Scotland – to demonstrate clearly their outrage and their determination to secure a much-improved, genuinely fair pay settlement from Cosla and the Scottish Government,’ she said.

University bosses condemned the lecturers’ strike, saying only one in ten pension scheme members had actually voted in favour of it.

It is not clear how many lessons will be impacted as the UCU does not have to say how many members will take part in the strike.

They pledged to lay on ‘replacement teaching, specific tutorials and access to online resources’ to help students and make mitigations in exams.

It comes after students endured months of online learning during the pandemic plus other lecturers’ strikes in 2018, 2019, 2021 and in February this year.

The Left-wing National Union of Students is supporting the strike despite the blow to its own members.

The University and College Union (UCU), which is behind the action, said if demands are not met there will be further strikes in the New Year.

‘They have had enough of falling pay, pension cuts and gig-economy working conditions – all whilst vice-chancellors enjoy lottery win salaries and live it up in their grace and favour mansions.

‘Staff are burnt out, but they are fighting back and they will bring the whole sector to a standstill.’ 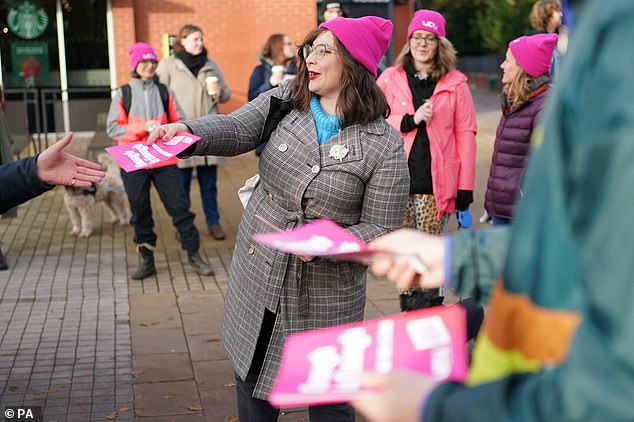 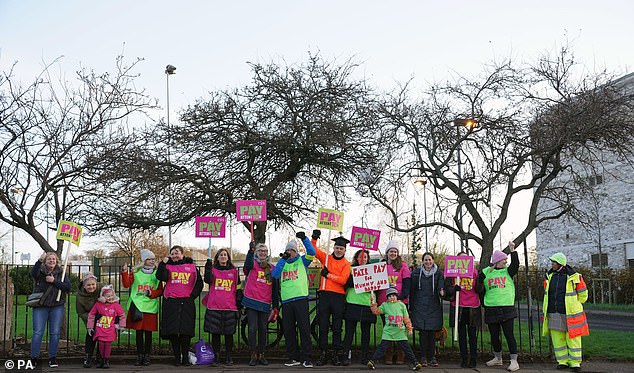 ‘Staff working conditions are students’ learning conditions, and for more than a decade both have come under attack from a sector that puts profits above education.’

On pay and working conditions, the union is calling for a ‘meaningful’ pay rise to deal with the cost-of-living crisis and action to end the use of ‘insecure’ contracts.

In the pension dispute, UCU is demanding employers revoke a ‘package of cuts’ made earlier this year which it claims will see the average union member lose 35 per cent from their guaranteed future retirement income.

Postal workers have gathered for a picket outside a Royal Mail delivery office.

A small group of members of the Communication Workers Union (CWU) were at the scene in Camden, north London, with banners and flags from 6.30am on Thursday.

A few drivers entering the delivery office beeped and waved to show their support.

As part of the UCU’s industrial action, they have also asked all members to ‘work to contract’.

In addition, they will ‘not cover for absent colleagues’; ‘refuse to reschedule classes missed due to industrial action’; and ‘remove materials for classes that would have taken place on strike days from online learning platforms.’

A spokesman for Universities UK, which represents vice chancellors, said the university pension scheme was ‘among the most generous in the private sector’.

Professor Steve West, president of UUK, said it was ‘disappointing’ the union had voted for strike action.

‘Of course, it is students who stand to suffer,’ he added.

‘We understand that strike action is the last thing students want after the disruption they have faced because of the pandemic and from previous industrial action.

‘This may be a worrying time for them, they may feel anxious about possible disruption.

‘But I would send this message; universities are well prepared to mitigate the impact of any industrial action on students’ learning, and we are all working hard to put in place a series of measures to ensure this.’

He added that libraries, computer rooms, students services and IT support will be available throughout the industrial action.