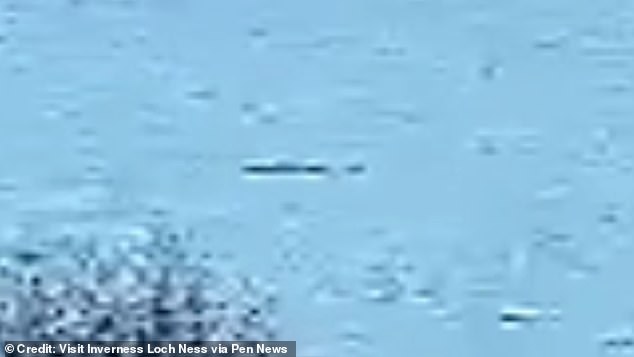 A Nessie hunter claims that he has proven the existence of the monster after spotting a 10ft long ‘black shape’ with a ‘curved hump, long snout and tail’ in Loch Ness.

Eoin O’Faodhagain, 58, said he got the ‘shock of my life’ when he saw the mysterious presence moving in the water while he was watching via webcam.

The veteran hunter described the sight to look similar to scenes from the 2007 film The Water Horse: Legend of the Deep which is based on the creature.

He is now convinced that the new footage could in fact bring Nessie ‘from folklore to reality’.

‘I noticed a splash and movement on the screen coming into view on the right, and a long black shape, and I immediately started a screen recording of this object,’ he explained.

‘I got excited because it remained on the surface of the water, moving very slowly, unlike a large fish that would leap out of the water, but would then submerge.

‘This object was no fish, or a log for that matter – it was moving in a controlled speed, slow, unlike a log which would be moving with the current.

‘I believe it is a live creature.’

The latest alleged sighting – which lasted for around ten minutes – was captured at Shoreland Lodges, near Fort Augustus, on the water’s southern shore, using a webcam maintained by Visit Inverness Loch Ness (VILN). 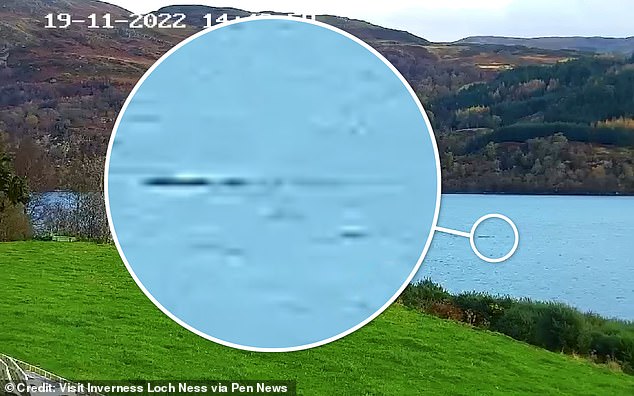 Mr O’Faodhagain thinks that the footage could in fact bring the legendary lake monster ‘from folklore to reality’. Pictured: Zoomed in images of the ‘creature’

The footage – which has been sped up for the sake of brevity – appears to show a long black object moving through the loch.

Mr O’Faodhagain often sits down to watch the water via webcam from his home in County Donegal, Ireland.

Throughout the years, he has racked up multiple entries in The Official Loch Ness Monster Sightings Register but this time he is convinced that he might finally have proven its existence. 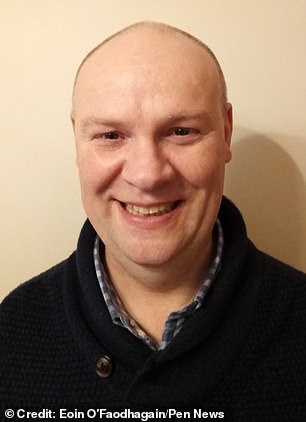 Mr O’Faodhagain (pictured) often sits down to watch the Loch Ness waters via webcam from his home in County Donegal, Ireland

He added: ‘I believe in the Loch Ness Monster after witnessing a live sighting in July 1987.

‘I think my video and photos on Saturday have proven the existence of the monster, and brought her from folklore to reality.’

Before this, there had been six official sightings on the sightings register in 2022, which matches that of the previous year. And according to the website, there have been a total of 1,143 to date.

Mr O’Faodhagain, who works as a hospital clerk, described what he saw as a ‘very strange looking creature’ and believes it could represent an unknown species.

‘There’s a tail in shaded grey, a black round curved hump in the centre, and what looks like a fin near the front of the creature,’ he said.

‘The head and neck are at an angle from the rest of the body, and there’s what looks like a long snout.

‘One way to describe it is Water Horse. I know that is the name of a film, but that is what it looks like.’

The film follows the story of young boy Angus MacMorrow who discovers a mysterious egg that grows up to be Nessie. 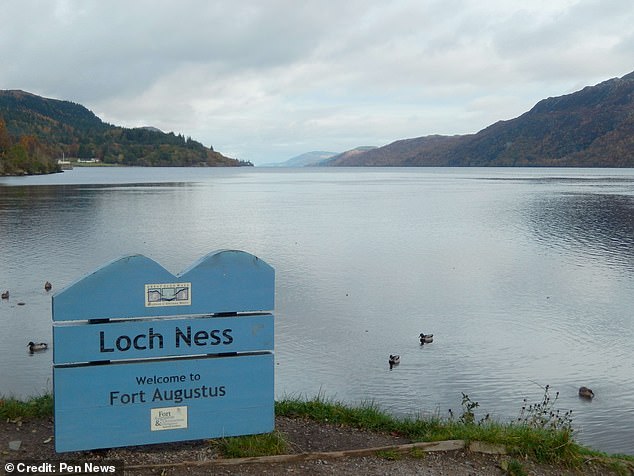 The latest alleged sighting – which lasted for around ten minutes – was captured at Shoreland Lodges, near Fort Augustus (pictured) on the loch’s southern shore

Mr O’Faodhagain, who works as a hospital clerk, compared his sighting to the depiction of the monster in the film The Water Horse: Legend of the Deep (pictured)

He continued: ‘I don’t think there is anything that we know about today in the lakes and seas of the world that resembles that shape.

‘One hypothesis for the existence of the Loch Ness Monster is that it is an unknown species.’

In April, experts described seeing the most compelling footage to emerge in the past 20 years of hunting for the Loch Ness Monster.

Gary Campbell, who has spent 26 years logging every credible sighting of Nessie, said it was the best footage he had seen in decades.

The remarkable footage was taken by a couple who are professionals in their early 50s, who were on holiday in the Scottish Highlands.

What is the Loch Ness Monster?

Rumours of a strange creature living in the waters of Loch Ness have abounded over the decades, yet scant evidence has been found to back up these claims.

One of the first sightings, believed to have fuelled modern Nessie fever, came in May 2, 1933.

On this date the Inverness Courier carried a story about a local couple who claim to have seen ‘an enormous animal rolling and plunging on the surface’.

Another famous claimed sighting is a photograph taken in 1934 by Colonel Robert Kenneth Wilson.

It was later exposed as a hoax by one of the participants, Chris Spurling, who, on his deathbed, revealed that the pictures were staged.

Other sightings include James Gray’s picture from 2001 when he and friend Peter Levings were out fishing on the Loch, while namesake Hugh Gray’s blurred photo of what appears to be a large sea creature was published in the Daily Express in 1933. 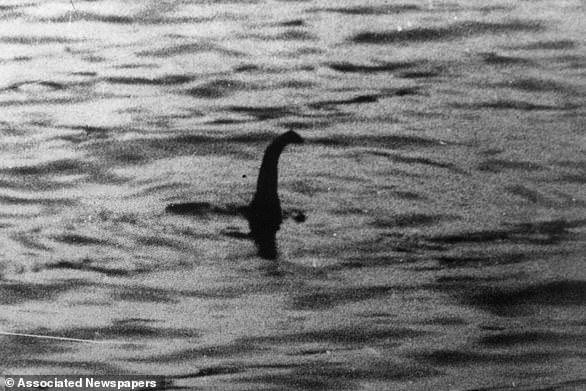 Robert Kenneth Wilson, a London physician, captured arguably the most famous image of the Loch Ness Monster. The surgeon’s photograph, which turned out to be a hoax, was published in the Daily Mail on April 21, 1934

The first reported sighting of the monster is said to have been made in AD565 by the Irish missionary St Columba when he came across a giant beast in the River Ness.

But no one has ever come up with a satisfactory explanation for the sightings – although in 2019, ‘Nessie expert’ Steve Feltham, who has spent 24 years watching the Loch, said he thought it was actually a giant Wels Catfish, native to waters near the Baltic and Caspian seas in Europe.

An online register lists more than 1,000 total Nessie sightings, created by Mr Campbell, the man behind the Official Loch Ness Monster Fan Club and is available at www.lochnesssightings.com.

So what could explain these mysterious sightings?

Many Nessie witnesses have mentioned large, crocodile-like scutes sitting atop the spine of the creature, leading some to believe an escaped amphibian may be to blame.

Some believe Nessie is a long-necked plesiosaur – like an elasmosaurus – that survived somehow when all the other dinosaurs were wiped out.

Others say the sightings are down to Scottish pines dying and flopping into the loch, before quickly becoming water-logged and sinking.

Eventually, enough of these are gathered to propel the log upward as deep pressures begin altering its shape, giving the appearance of an animal coming up for air.

Kyler Murray fires back at Patrick Peterson’s criticism: ‘You on some weird s—‘