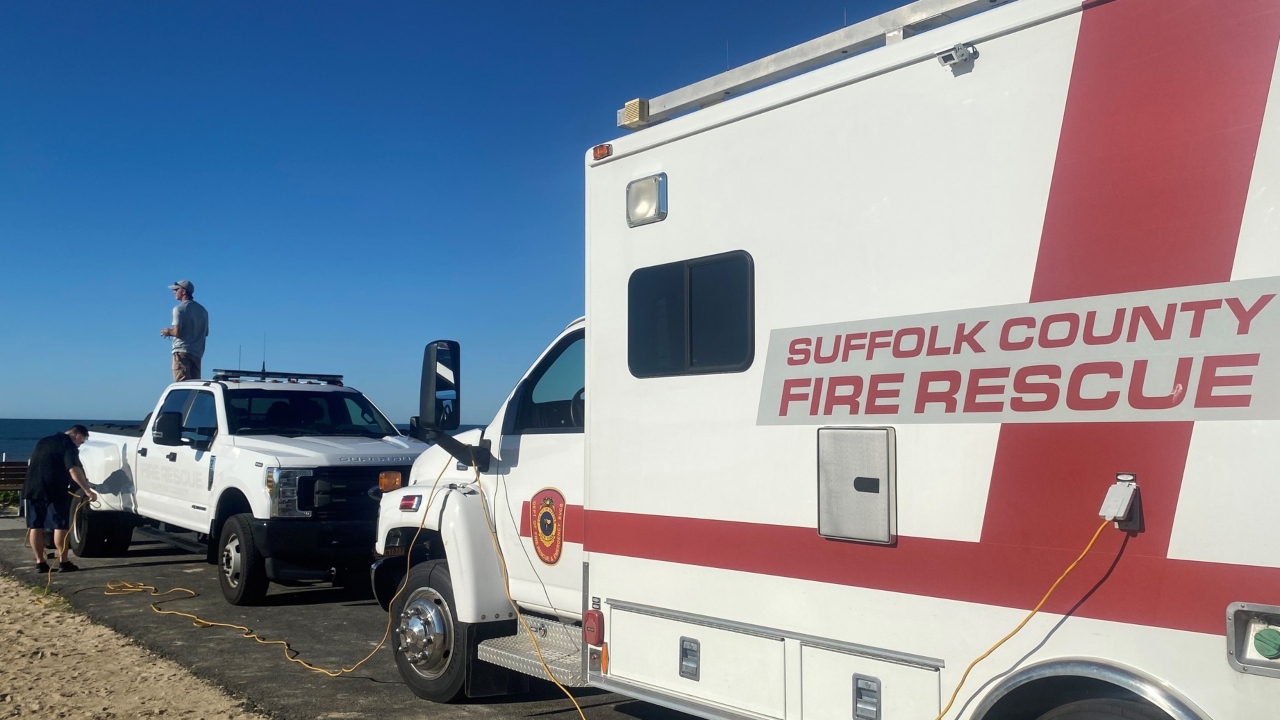 Lifeguards started work an hour early to look for sharks and drones were used in the effort.

“Working in cooperation with the Parks Department and lifeguards on jet skis and paddleboards, the team provided continuous monitoring of the surf line on Sunday and Monday. The team’s live streaming ability allowed parks officials, police and lifeguards to view real-time video from the drone operation,” it explained.

County Executive Steve Bellone said Sunday that the lifeguard had been playing the role of a victim during a morning training exercise when the shark bit him in the chest and hand.

“If you’re going to have an encounter with a shark this is probably the best scenario you could have,” he said, adding the lifeguard received immediate treatment from other officials already engaged in the training. “We have never had an incident like this occur. Hopefully we never will again.”

Bellone said there had been an additional shark sighting following the attack; it was not clear whether it was the same shark.

Zach Gallo, the 33-year-old lifeguard, told the New York Post on Monday that his survival instinct kicked in.

“I ripped back and just started hammer-punching, and I felt the rubber texture of the head. It felt like the size of a basketball,” he recalled.

Gallo, who required stitches, said he was grateful that his injuries were “minor” and that the shark was likely just “curious.”

Shark sightings have increased as warmer waters have sent them north earlier than usual.

SOUTHERN CALIFORNIA JUVENILE WHITE SHARKS ARE ‘HANGING OUT’ NEAR BEACHES BUT NOT CONCERNED ABOUT HUMANS: STUDY

Last week, a 17-year-old girl was attacked by a 9-foot-long shark off Florida’s Gulf Coast.

In Volusia County – the “Shark Bite Capital of the World” – there were 17 shark bites recorded last season.

Researchers and scientists say sharks get a bad rap and shark advocates have called for rebranding attacks as “interactions.”

A man carries his surfboard after surfing in the Atlantic Ocean along the beach in Long Beach, New York, May 9, 2022.
(REUTERS/Shannon Stapleton)

WPBF 25 News reported Monday that the director of a controversial shark fishing tournament in the Sunshine State’s Palm Beach County had received threats to his life just a week before the event.

Protesters say such tournaments are devastating to marine life, but its leaders said it is being used to do a proper stock assessment.

The U.S. recorded the most unprovoked shark bites worldwide.

Julia Musto is a reporter for Fox News Digital. You can find her on Twitter at @JuliaElenaMusto.