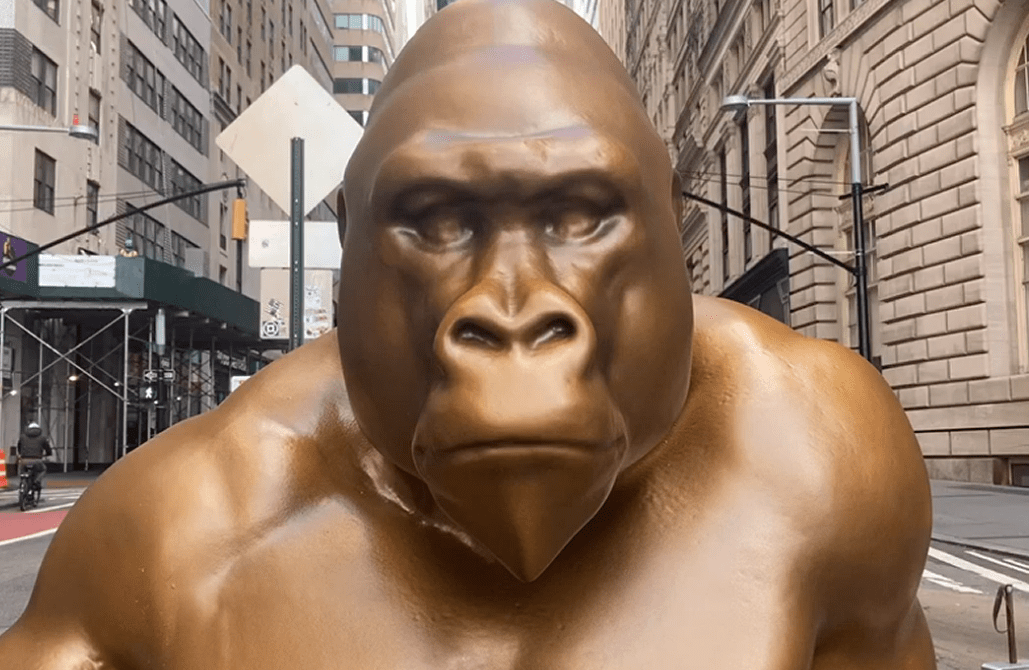 Harambe the Gorilla is back. This time as a 7-foot-bronze statue staring down the infamous Charging Bull, surrounded by 10,000 bananas, in Bowling Green Park.

Like his death in 2016, the gorilla’s reemergence has caught the attention of passersby.

“We were here last night and we noticed there was a gorilla here,” said bystander Jessica Sutherly. “Once a truck passed, there was a whole bunch of bananas and immediately I ran over.”

“I came here and I didn’t know what was going on with the bananas,” said Isabella Miyashiro, another bystander. “Then I saw the gorilla and I started to reflect, ‘why?’”

Neal Muller and Annie Zhou, traveling from Chicago, decided to visit the statue after Muller saw a post of the installation on Reddit.

“I saw it on a post on Wall Street Bets and we came over here,” said Muller.

Robert Giometti, Tejay Aluru and Ankit Bhatia, the co-founders of Sapien.Network, an in-development social networking platform “dedicated to putting the needs and welfare of human beings first,” created the display to highlight wealth disparity between the American public and Wall Street businesses.

According to a press release, Harambe represents “millions of people who struggle under a system that enriches wealthy elites.”

“Harambe was vulnerable,” said Robert Giometti. “The system shouldn’t have been set up to let [Harambe’s death] happen. It’s the same thing that we see at a global scale with capitalism as it stands right now.”

“Harambe is a representation of something that lets us look at something more than ourselves,” said Ankit Bhati.

In addition to Harambe, Aluru, Bhatia, and Giometti sourced 10,000 bananas, which symbolize a lack of trust among people and respect for finite environmental resources. According to Bhatia, Sapien.Network plans on distributing these bananas to local food banks and community fridges.

“We acknowledge the banana as a trust building mechanism,” said Tejay Aluru. “There’s a distinct lack of trust and empathy in the world. We wanted to go back to the simple roots and giving a banana is powerful.”

“It’s also about respecting nature’s limits,” said Giometti. “Bananas rot and you can’t have infinite bananas. Some people tend to think that you can have infinite growth and have infinite money, but that’s not how the world works.”

Despite their intent, some observers had trouble comprehending this message until News 4 explained it to them.

“I thought it was somebody pulling a prank or something,” said Sutherly who was taking in the statue’s symbolism. “The fact that the gorilla only has four bunches and the bull has a lot. It definitely represents how much the American people get versus the top one percent.”

“I thought it was a protest,” said Miyashiro.

Others, however, rejoiced in the spirit of Harambe taking pictures with the statue and even taking a few bananas for the road.

“It’s funny,” said Muller, who took a few photos with the statue and bananas. “Apes together strong.”

“People are grabbing bananas and cheering,” said Bhatia. “This is what it’s all about.”

“The whole thing is in the spirit of giving,” said Aluru. “We’re just three random dudes giving out bananas because we can.”

In 2016, a 3-year-old boy fell into Harambe’s enclosure at the Cincinnati Zoo causing zookeepers to shoot the gorilla in order to protect the child. His killing sparked a controversial debate among internet users with some stating that it appeared as if the gorilla was protecting the child.

Even though he died in 2016, the recreation of his statue has made it clear that his legacy is here to stay.