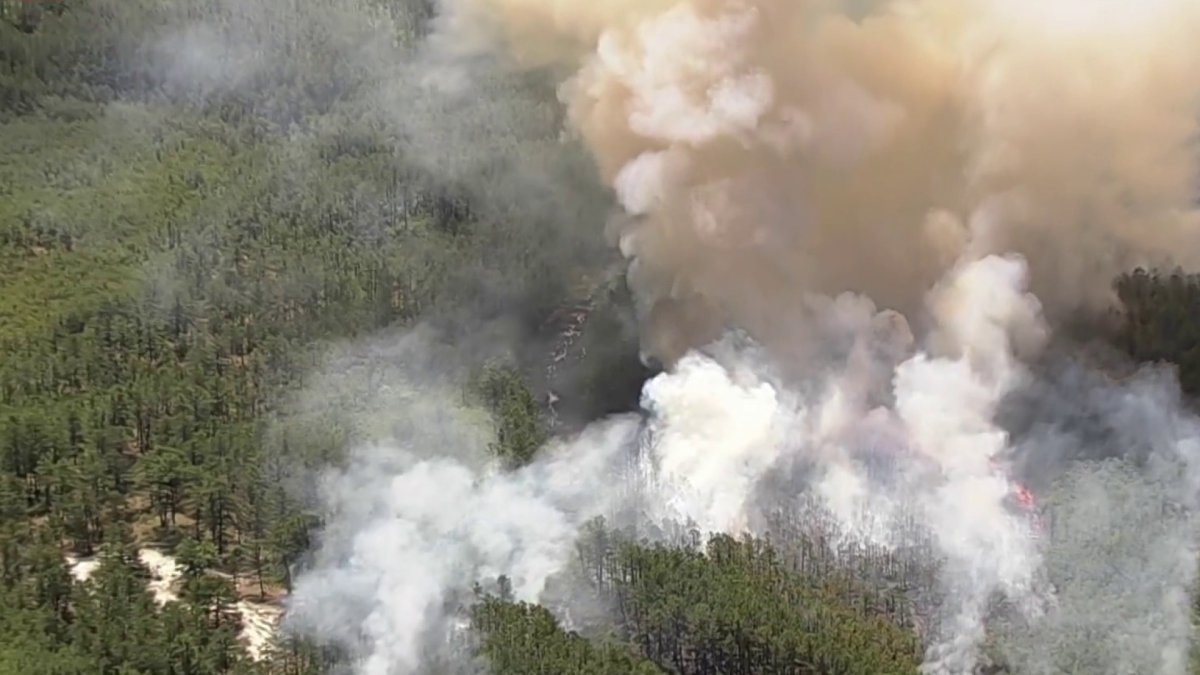 You can watch officials give a live update on this page starting around 12:30 p.m. Monday.

New Jersey firefighters have spent two days now battling a major wildfire in the Wharton State Forest in Burlington County and a small part of Atlantic County. And officials say they ruled out a natural cause starting the blaze.

The fire, which was being fueled by dry and breezy conditions, began Sunday morning in a remote section of the forest along the Mullica River in the Pine Barrens area. As of Monday morning, thick white smoke and flames could be seen as firefighters continued a backfiring operation to contain the blaze, which spanned areas of Washington, Shamong, Hammonton and Mullica townships.

As of late Monday morning, the fire has spread to 7,200 acres in size and was 45% contained, which is up for 20% as of Sunday night, according to the New Jersey Forest Fire Service.

New Jersey Department of Environmental Protection Commissioner Shawn LaTourette said the fire could spread to the largest wildfire in the Garden State in 15 years.

McLaughlin said he expected to fire to spread to 15,000 acres before complete. He said it could be until Wednesday that the fire was finally contained, but it could happen earlier if rain occurs.

No injuries have been reported.

By late Monday moring up to 18 structures were threatened by flames, the forest fire service said.

As firefighters battled the flames, Route 206 from Chew Road to Atsion Road and Route 542 from Green Bank Road to Columbia Road were closed as of Monday morning. “Batsto Village and all associated hiking and mountain bike trails are closed to visitors,” the forest fire service said.

McLaughlin said that they had ruled out “natural causes,” but had no cause yet for the fire.

The New Jersey Forest Fire Service defines a wildfire as an uncontrolled fire burning the different types of vegetation that cover the land. A wildfire is considered a “major wildfire” when it exceeds 100 acres in size.