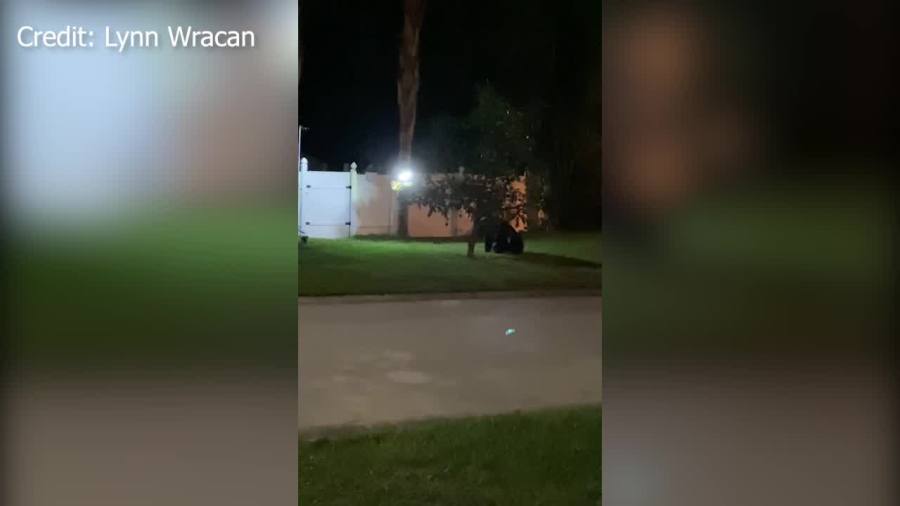 DAVENPORT, Fla. (WFLA) — A resident in Davenport isn’t happy with a black bear that’s decided to spend his nights in her neighborhood.

Lynn Wracan said the bear has been wandering around the Thousand Oaks community for months.

In a video she sent to News Channel 8, the bear can be seen in the early morning hours just chilling by a tree.

“No freaking way,” Wracan can be heard saying in the video.

At first, it seemed the bear was interested in the Christmas lights, but that wasn’t the case.

“No, he’s eating out avocados!” she whispered. “No that’s not a good idea, pumpkin. Oh, you’re gonna take a nap now? Seriously?”

According to Wracan, the bear has been eating the fruit off the neighborhood trees since he moved in.

She said she’s contacted authorities, but she was told they couldn’t remove him. In the meanwhile, she’s waiting to see if he’ll hibernate.

“Wildlife said we wouldn’t see him in December, and he is here to gather as many calories as he can,” she said.

However, it seems he isn’t going anywhere.

The Florida Fish and Wildlife Commission said black bears are typically shy animals and rarely attack people, but they have the potential to seriously injure or kill if provoked.

The FWC generally advises giving bears space, remaining calm, and avoiding contact. Move backward slowly while giving the bear space to escape, but if your movement is irritating the bear, hold your ground instead.

Never run, play dead, or climb a tree. A black bear will likely catch you.

In the event that the bear does attack, fight back aggressively with whatever you can use. The FWC said people can successfully fend off black bears in some cases.

If a bear appears to be a threat to you, your property, or your livestock, contact the FWC.