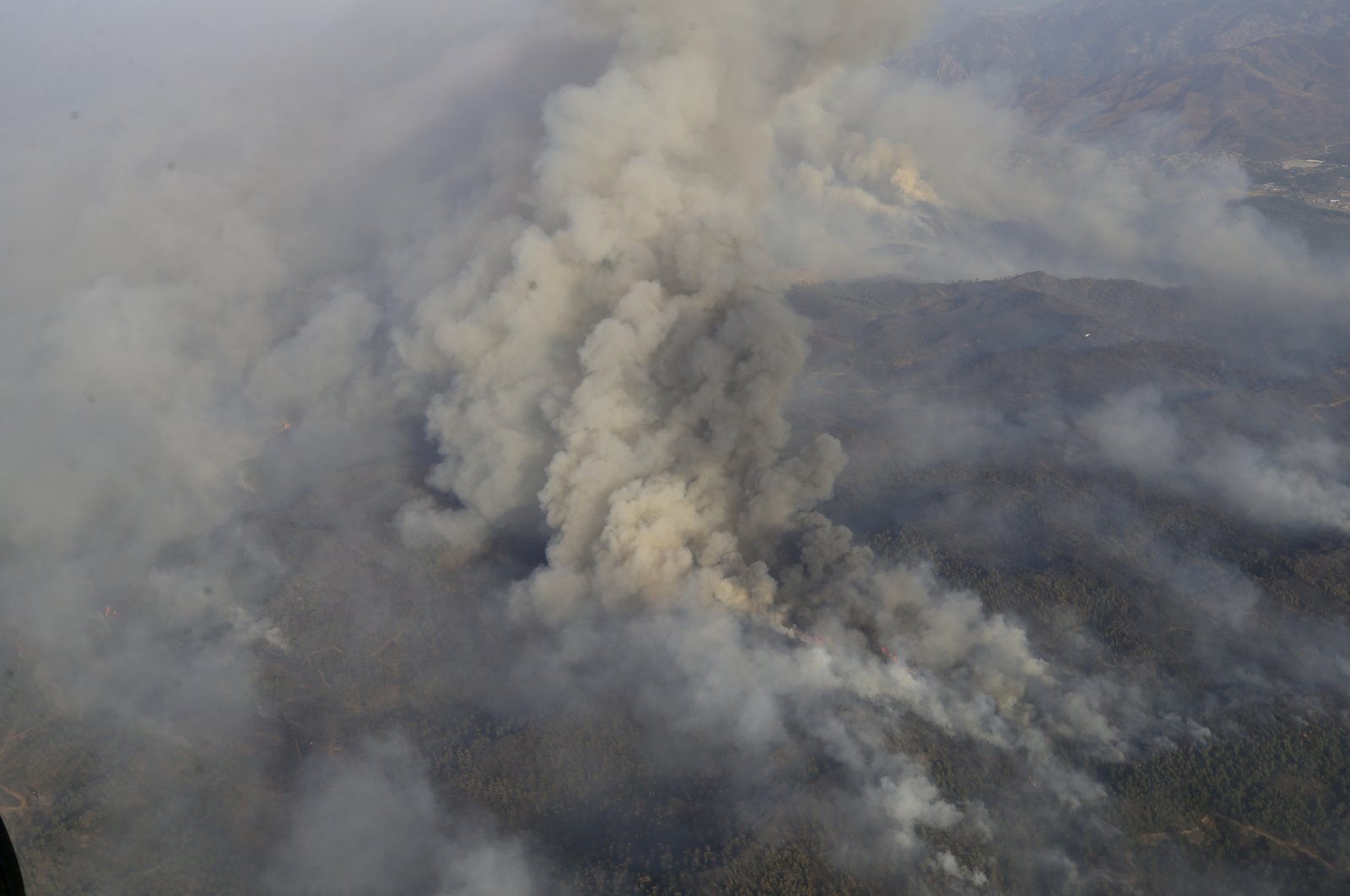 A wildfire threatening the coastal resort town of Marmaris in southwestern Turkey entered its third day on Friday, sparking fears that it may spread amid the worsening weather forecasts. Meanwhile, more details emerged about the suspect who confessed to starting the fire.

Firefighters sought to contain the wildfire in the Bördübet neighborhood of Marmaris, a popular vacation destination in Muğla province, from land and air. Windy conditions, however, are fanning the flames and spreading them through a forested area. The blaze was initially under control but the winds revived it again. Meteorological data for Friday showed that the winds prevailing in the area would be strongest in the next three days. The flames are heading toward central Marmaris, but authorities reassured the public that all measures were in place and a road connecting the town to Datça, another popular coastal resort, was closed as a precaution.

Scenes of burning woodland sparked fears of a repeat of last year’s forest fires that devastated some 140,000 hectares (345,950 acres) across the region. It had taken almost two weeks to contain last year’s fires, which affected Muğla and neighboring Antalya.

On Friday morning, airplanes and helicopters resumed their operations, dousing the burning areas with water, while crews on the land were already working around the clock to put out the fire, in the company of volunteers and water cannon vehicles of police. The fire is estimated to have already affected more than 3,400 hectares of land.

Police helped firefighters with water cannon vehicles as they sought to put out the fire that began at around 8 p.m. (5 p.m. GMT) on Tuesday and affected more than 3,400 hectares of land. Also, on Friday, water-dropping aircraft from Azerbaijan and Qatar joined the fight against the wildfire. Azerbaijan sent an airplane while Qatar dispatched three helicopters to aid the efforts.

Health Minister Fahrettin Koca said late Thursday that 29 people had been affected by the fire, with two people still receiving treatment in the hospital. Some 274 people were evacuated as a precaution, officials said.

Interior Minister Süleyman Soylu said Thursday that one person had been detained and that he had admitted to burning down the forest out of frustration due to family issues.

The suspect was identified as S.A., a local. S.A. was apprehended after security forces checked some 3,832 people and vehicles on suspicion of involvement in the fire. The searches were conducted based on security camera footage from two hotels and two camping grounds near Saklı Koy, an area that authorities suspected was the source of the fire. Finally, at the potential epicenter of the fire, security forces discovered three burned tires and an abandoned motorcycle. The motorcycle’s owner was S.A., who had a criminal record, including threat, assault and kidnapping. He had gone missing with his cellphone turned off a few hours after the fire started. Yet, his social media account showed posts of threats against his family, apparently over a land dispute, and the posts were sent from the location that also happened to be the epicenter of the fire.

An extensive search led to the discovery of S.A., intoxicated and lying on the ground, in a part of the forest untouched by the blaze. Near him were two bottles filled with a liquid resembling gasoline. When questioned, S.A. admitted to his role in the fire, telling authorities that he deliberately threw burning cigarette butts in three separate places in the forest after he became angry with his father who sold his share in a family plot without giving anything to him. S.A. told investigators that he thought about killing himself as well by walking into the fire.