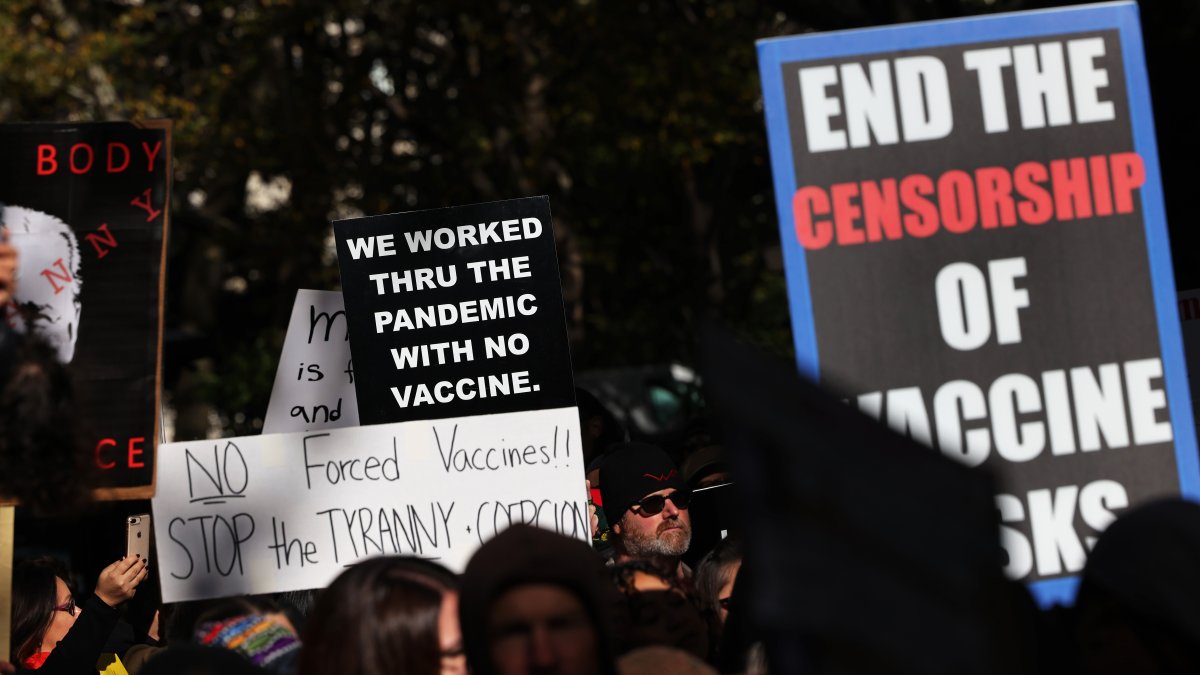 A judge has ruled that the city’s vaccine mandate is invalid for NYPD members part of the police union, and has ordered all officers who were fired or put on leave to be reinstated.

In Friday’s ruling, the judge ruled that the city did not establish “a legal basis or lawful authority for the DOH to exclude employees from the workplace and impose any other adverse employment action,” striking down the mandate as it imposed “a new condition of employment” to the members of the Police Benevolence Association.

The ruling calls for the workers who lost their job or were put on unpaid leave to be reinstated to their previous positions. In a statement, the PBA cheered the decision, saying it “confirms what we have said from the start: the vaccine mandate was an improper infringement on our members’ right to make personal medical decisions.”

A spokesperson for the city’s law department said that they will be “immediately appealing this ruling. It is at odds with every other court decision upholding the mandate as a condition of employment.”

By filing a notice of appeal, the judge’s decision will be frozen until the appeal is heard. A city official said that other unions that filed similar suits lost their cases, such as one brought by a firefighters union that was dismissed on Thursday.

As a result of the decision, two city firefighters unions said in a statement that they will request the FDNY commissioner to reinstate members of the department who were let go or placed on unpaid leave due to the vaccine mandate.

The judge’s ruling comes after New York City Mayor Eric Adams announced the city would pull the plug on the unprecedented pandemic program come Nov. 1 — at least for the private sector.

Adams announced Tuesday that the strictest-in-the-nation COVID vaccine requirements for private businesses –implemented by his predecessor as the South African variant fueled case and hospitalization surges across the five boroughs in his waning days in office — will end. At that time, he said the same rule for municipal employees would stay.

“Our vaccinated workforce kept the city open and operating, with over 300,000 employees it was crucial to put it in place and we’re keeping it in place,” Adams said. “Our vaccinated workers have carried out their jobs and stepped up when the city needed them the most and we think it’s imperative to send the right message and lead by example.”

Also ending: Vaccine requirements for New York City schoolchildren to participate in sports and other higher-risk extracurricular activities, Adams said. He said 89% of New Yorkers, including children, have been vaccinated so far.

The mayor said lifting the COVID restrictions is intended to provide schools, parents and businesses more flexibility, but the change by no means indicates the city is pulling back on encouraging booster shots and COVID vaccinations for all.

“The rollout has been important and crucial and because we’ve been so successful, it’s time to move on to the next level of fortifying our city,” Adams said as he got his own COVID booster at City Hall. “This puts the choice in the hands of New Yorkers. It’s imperative we’re asking them to continue to encourage their employees to get their vaccines and booster shots.”

The mayor dropped the vaccine requirement for professional athletes in late March as vaccine controversy surrounded Nets’ Kyrie Irving, drawing ire from businesses who cried double standard. It’s not clear how many private-sector employees lost their jobs over the mandate, though, or what might happen now that it’s over.

Asked directly about the municipal mandate, which led to the termination of more than 1,500 city employees, Adams says an end date is not on the radar.

Pat Lynch, the head of the PBA, eviscerated the mayor in a statement shortly after the announcement was made, calling the mandate “arbitrary, capricious, and fundamentally irrational.”

Many are considering the new changes a double standard in the city’s vaccination policy, claiming there are different rules for wealthy athletes and performers, and another set of rules for everyone else. NBC New York’s Adam Harding reports.