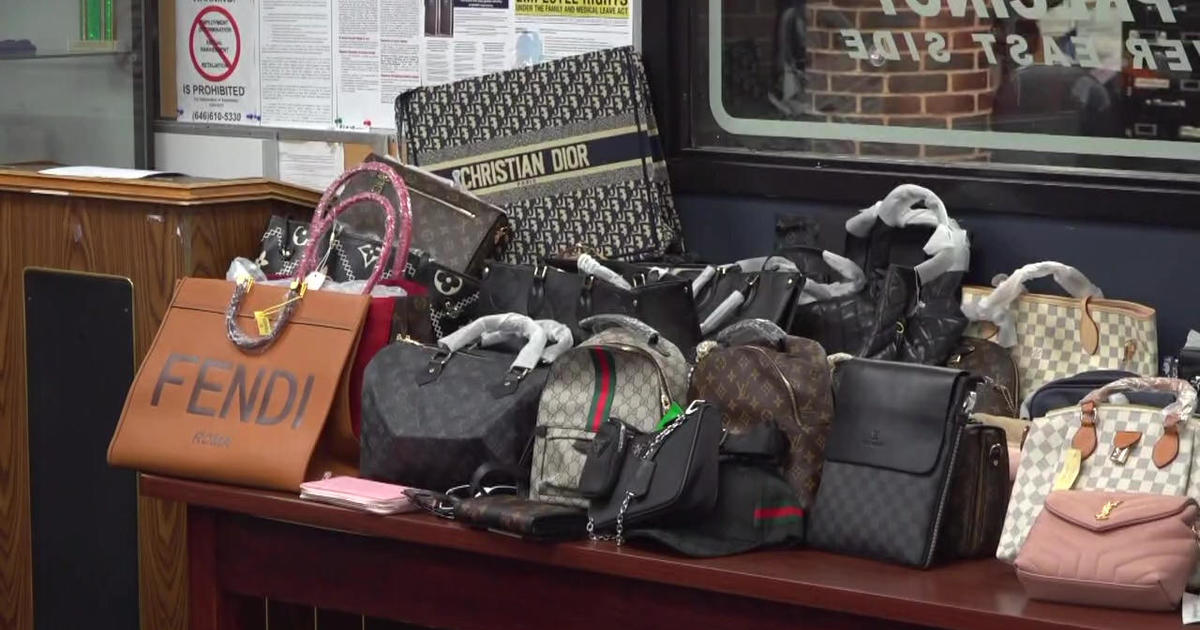 NEW YORK — Police say they seized a mountain of knock-off luxury goods Monday with a street value of more than $10 million.

They’re cracking down just as counterfeit vendors are ramping up for the holiday season.

CBS2’s Tim McNicholas has more on what officers found.

Louis Vuitton, Balenciaga, Chanel — it was not the latest shipment to Fifth Avenue. The NYPD said it seized three truckloads of counterfeit luxury goods confiscated off the street.

“During the holidays, activities such as this will increase,” Chief of Patrol Jeffrey Maddrey said.

At a news conference Monday, police said they arrested 17 people for selling fakes — from flashy watches to sunglasses.

“There’s layers of victims when you look at this. There are people out here buying these bags thinking they’re real when they’re not real,” Maddrey said.

The NYPD said it seized the items along Canal Street, a hotspot for counterfeit bags and shoes, adding it was responding to complaints from people in the area and the manufacturers of actual luxury merchandise, McNicholas reported.

MD Laskar, who runs a gift shop on Canal, said people are often frustrated by counterfeit vendors taking up too much sidewalk space.

“People have no space to walk even, though you know,” Laskar said.

He also said the vendors may be hurting his gift shop business. Nonetheless, he sympathizes with them.

“This is small business people. They have family. They are surviving, themselves. And you guys coming and taking their stuff,” Laskar said.

At the news conference, the NYPD said it wants to work with people to make sure they’re selling merchandise legally, and is planning an outreach effort to educate the vendors.

“Tell them how they can get their license the right way,” Maddrey said.

To help avoid what they saw Monday.

“The sidewalks were blocked. There was property everywhere, merchandise everywhere, and this really impacts local businesses in a negative manner, as well as reduce the quality of life of the residents,” Maddrey said.

Police said they teamed with a specialist contracted by fashion brands to help identify fakes.

As for holiday shoppers worried about getting scammed, experts say if a deal seems too good to be true, it probably is.

And the fakes are being sold far beyond Canal Street. Shoppers also say they’ve seen counterfeits from street vendors on Fifth Avenue recently.

“I’m not a fan of it, but it doesn’t surprise me to see it,” tourist Nathan Garner said.

Tim McNicholas is a reporter for CBS New York. He joined the team in September 2022 after working in Chicago, Indianapolis, Toledo and Hastings, Nebraska.