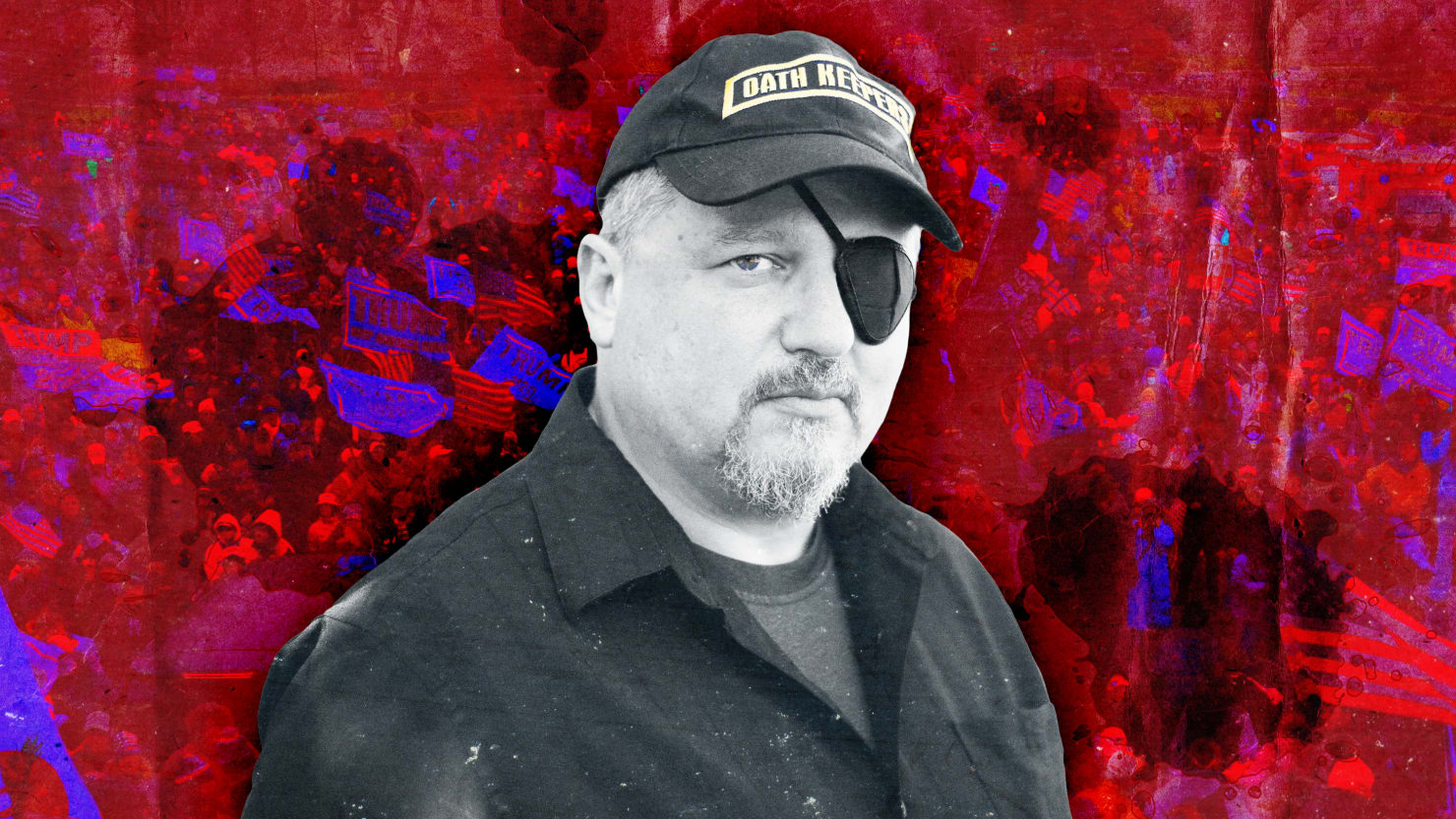 Prosecutors say his messages show a plot to keep Trump in office.

Rhodes and four other Oath Keepers are currently on trial for seditious conspiracy related to their alleged involvement in the Capitol breach. Authorities accuse the group of a plot to keep Donald Trump in office by preventing President Joe Biden’s victory from being certified. In text messages to allies, unveiled in court on Friday, Rhodes called on Trump to invoke the Insurrection Act and mobilize the military to stop Biden’s inauguration. Rhodes also hinted at a plan to act even without Trump. “He needs to know that if he doesn’t do it we will,” Rhodes wrote.

After Biden’s victory was announced on Nov. 7, 2020, Rhodes warned of imminent bloodshed. Some of those comments were public. At a Dec. 12 rally in D.C., Rhodes called on Trump to block Biden militarily.

“Show the world who the traitors are, and then use the Insurrection Act to drop the hammer on them,” Rhodes said at the event. “And all of us veterans who swore that oath—until you’re age 65, you can be called up as the militia to support and defend the Constitution. He needs to know from you that you are with him, [and] that if he does not do it now while he is commander in chief, we’re going to have to do it ourselves later, in a much more desperate, much more bloody war. Let’s get it on now–while he is still the commander in chief.”

Prosecutors played a clip of the speech in court on Friday. Although Rhodes’ Dec. 12 remarks have previously been reported, new text messages suggest that the Oath Keepers leader was privately preparing for a fight.

Rhodes was a participant in a Signal group chat called “Friends of Stone,” a reference to Trump associate Roger Stone, prosecutors revealed on Friday. On Nov. 7, the day Biden’s victory was declared, Rhodes took to the group chat to forecast militant action.

“The answer must be to refuse to accept, acknowledge, respect or obey any of these imposters or their pretend legislation,” Rhodes wrote, “and get your gear squared away and ready to fight.”

Rhodes also messaged Oath Keepers leaders and likened them to Revolutionary War fighters, telling them in late Nov. that “force on force is the way to go” and that the fight to protect Trump would be “like 1776 all over again, or more like 1775 all over again.”

Rhodes repeatedly called on Trump to invoke the Insurrection Act, and published open letters imploring the then-president to mobilize not just the military but also unofficial militias before Jan. 6. Still, Rhodes told others that he was willing to take action even without Trump.

“But he needs to know that if he doesn’t do it we will,” Rhodes wrote to Oath Keepers, adding that “if we have to do it ourselves without him as Commander in Chief, it will be exponentially harder, and many more of us will die.”

“This will be DC rally number three,” Rhodes texted Oath Keepers attorney Kellye SoRelle in late December, according to prosecutors. “Getting kind of old. They don’t give a shit how many show up and wave a sign, pray, or yell. They won’t fear us till we come with rifles in hand.”

Other Oath Keepers were also revealed this week to have sent menacing messages the day of the Capitol attack. “If we’d had guns I guarantee we would have killed 100 politicians,” defendant Thomas Caldwell wrote in a Facebook message. Caldwell is accused of helping coordinate a “quick reaction force” that would respond to violence at the Capitol.